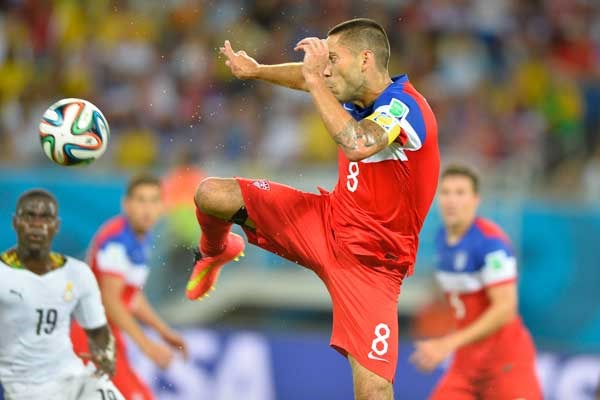 By J Hutcherson – WASHINGTON, DC (June 16, 2014) US Soccer Players – The USMNT tried to ride an early goal to three points but Ghana had other ideas in 2014 World Cup Group G. The USMNT regrouped after giving up a late equalizer to take three points into their second Group G game against Portugal on Sunday. Here are 5 points to take from the World Cup win over Ghana.

34 Seconds for the USMNT

That’s FIFA’s official timing for Clint Dempsey’s opening goal. Dempsey looked the part during the anthems, showing a seriousness that didn’t take long to change the game. Dempsey on the ball looked composed, he saw his chance, and he took it under pressure in the Ghana box. Whatever the game plans were on both sides, Dempsey changed them almost immediately. The Group G opener became about both teams responses to the Dempsey goal.

Forced Substitutions for the USMNT

No coach likes being told what to do, and that’s what forced substitutions create. The coach has no choice. Whatever strategy and tactics were in play suddenly aren’t. Jozy Altidore and Aron Johannsson aren’t similar players, and it’s not a like for like swap. With Altidore forced out with injury in the 21st minute and Matt Besler following at halftime, USMNT coach Jurgen Klinsmann lost two choices. That changes the game, limiting options to address issues with his squad. There were issues, even before an onslaught of chances from Ghana in the second-half. Ghana liked targeting the left side of the USMNT early and often. Their shot selection as much as what the USMNT did defensively preserved the USMNT lead. Klinsmann’s defensive substitution at halftime when Besler couldn’t continue meant a defensive adjustment for a team overly relying on defense. That’s not the position Klinsmann expected. What that created was Klinsmann’s biggest decision of the game, subbing on Graham Zusi with his final sub in the 77th minute. Again, this wasn’t a straight up choice, with Bedoya also slowed with an injury. Klinsmann’s substitutes won the game, capping a coaching nightmare with coaching success.

At times, the word ‘selection’ is overly generous in describing Ghana’s blast and hope approach. The development was there, the shot selection wasn’t. With so many opportunities, Ghana didn’t do well enough keeping their shots on frame. USMNT goalkeeper Tim Howard is a dominant and experienced presence who knows how to marshal a defense and keep the opposing strikers honest. He didn’t need to do as much as expected against Ghana attackers unable to keep the ball down. Ghana pressured the USMNT defense multiple times, and multiple times the shot wasn’t on target. That was the crucial difference. At World Cup level, the USMNT took their best chance. Ghana squandered multiple chances.

Kevin-Prince Boateng and Michael Essien apparently aren’t good enough to start for Ghana, which is quite the statement if they weren’t needed to turn the offense around. Both subbed on in the second-half and Ghana needed them desperately.  Part of that was simply poise on the ball, something Ghana lacked as they sent shots skyward. Ghana’s experimental phase should end sometime between now and the kickoff of their game against Germany. They have some obvious answers to take advantage of against a team that isn’t going to try to preserve a 1-0 lead.

The Left Side of the USMNT

Ghana liked what they saw early and often along the left side of the USMNT defense. DaMarcus Beasley needed to do a lot to make sure he wasn’t the one to give Ghana their chance. He wasn’t the issue for the USMNT defense. What’s most telling about Beasley’s game is that he also pushed up and added to the USMNT attack. That’s a risk, but Beasley wasn’t caught out. Ghana’s equalizer didn’t come by exploiting the left back. Beasley proved he can play his part in qualifying, and nothing changes for him at another World Cup.