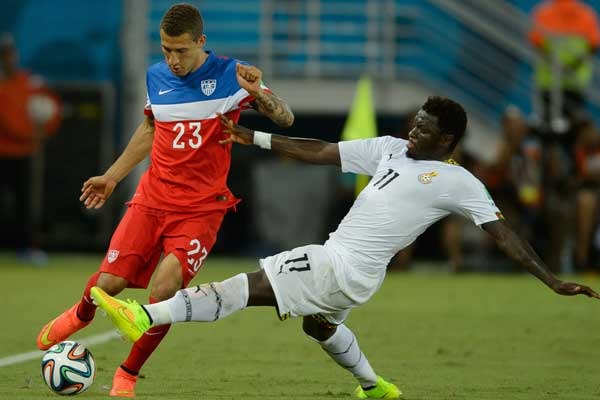 The Ghana Football Association announced on Thursday that two members of the Ghana National Team are suspended indefinitely. Ghana suspended Kevin-Prince Boateng and Sully Muntari prior to the team’s final World Cup Group G game against Portugal. Ghana can still advance to the knockout round of the 2014 World Cup.

Kevin-Prince Boateng is suspended for “Boateng’s vulgar verbal insults targeted at coach Kwesi Appiah during the team’s training session in Maceio this week. Boateng has since showed no remorse for his actions which has resulted in the decision.”

Sully Muntari’s suspension is due to “his unprovoked physical attack on an Executive Committee member of the GFA and a management member of the Black Stars, Mr. Moses Armah on Tuesday 24th June, 2014 during a meeting.” Muntari wasn’t eligible to play against Portugal due to yellow card accumulation. Muntari picked up a yellow card four minutes into stoppage time against Germany.

Ghana reportedly settled a pay dispute with their national team on Wednesday. Ghana players had taken action earlier this week to confirm payment for their participation in the 2014 World Cup.

Ghana plays Portugal at 12pm on Thursday in Brasilia. They need a win and a USMNT or Germany loss to potentially force a tiebreaker scenario and advance. Portugal can also advance with a lopsided win over Ghana and a USMNT loss. Both the Ghana and Portugal advancement scenarios become far less likely should Germany lose to the USMNT due to Germany’s +4 goal differential.