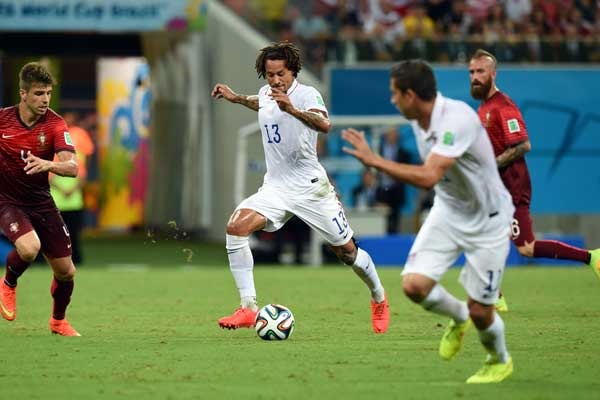 By Jason Davis – WASHINGTON, DC (June 24, 2014) US Soccer Players – It wasn’t that long ago that a rumbling discontent swirled around the inclusion of Jermaine Jones in each and every USMNT lineup. It wasn’t all that long ago that the calls for replacing Jones in the starting eleven were quite loud.

Through two games at the 2014 World Cup, Jones stands above his teammates as the best player on the field. It’s not just the goal he scored against Portugal, though that was crucially important to result and a chance to play for advancement on Thursday. It’s everything else Jones is doing, from causing havoc for opposing attackers to springing his American compatriots forward.

So much of what Jermaine Jones means to this team showed in his goal. Whatever benefit he gained from players screening Portuguese keeper Beto on his shot in the 64th minute, that Jones lifted the Americans in that moment felt right.

Against Ghana, Jones was a marvel. He the right side of the midfield as part of Jurgen Klinsmann’s diamond configuration, flying up and down the field as key defender and occasional link between the USMNT defense and the attack. The Americans sat back against Ghana in part because of Clint Dempsey’s early goal. It was Jones who did the yeoman’s work of helping hold off the opposition from minute one until the equalizer late in the game. He stayed at home, in the parlance of sports, and did it with aplomb.

Jones’s positional discipline – meaning his ability to push down a latent instinct to range all over the field without regard for how it might unbalance the rest of the team – was always the biggest knock against him. When fans and pundits wondered if the team might be better without Jermaine Jones in the lineup, it wasn’t because of his skill. It was always because no one could be sure if he would play within the team.

Jermaine Jones is very good, but he doesn’t play a position that allows for complete freedom. He’s not an attacker whose talents are so overwhelming that where he is on the field is secondary to what he might do with the ball.

In addition to a reputation for indiscipline (read: people believe he’s a card danger), Jones’s position in the team seemed dependent on his relationship with Michael Bradley in the center of the American midfield. For much of Klinsmann’s tenure, especially in the year and months leading up to the World Cup in Brazil, the question of what to do with Jones revolved around whether he was the best partner for Bradley. Both are natural defensive midfielders who are more likely to play box-to-box for the USMNT.

The USMNT cannot sacrifice the defensive bite in that part of the field to install a truly creative player. Klinsmann can’t expect to sit two holding players in front of the backline and expect to score enough goals.

That means the back-and-forth understanding between Jones and Bradley had to be near perfect for the system to work. If Jones pushed up the field, Bradley should fill the space behind him, and vice-versa. The problems cropped up when Jones (or Bradley, though the blame was rarely heaped upon him), in his exuberance to make plays and push the pace of play, abandoned his holding role with Bradley pushed up the field. What sounded find in theory rarely seemed to work in practice.

The new wrinkle that made it all work came in the form of Kyle Beckerman. Initially, Klinsmann’s decision to put Beckerman, Bradley, and Jones on the field together looked like capitulation. Playing three midfielders of a defensive bent doesn’t normally lead to any sort of attacking initiative. However, Beckerman’s complete commitment to the spot in front of the American defense created a positive ripple through the team.

Again, in the USMNT setup Bradley and Jones are box-to-box players (Bradley’s move from Europe transitioned him into a box-to-box role for Toronto FC, it should be noted), not defensive midfielders. With Beckerman stationed at that position and possessing none of the wandering spirit of his midfield teammates, Jones and Bradley were free to move higher up the field.

In Bradley’s case, that move was to a position higher than he’d ever played before. Bradley is now the de facto USMNT playmaker. For Jones, the addition of Beckerman let the former Schalke 04 stalwart simply be himself. Against Ghana, he was nominally on the right side and mostly stuck to that flank. He could also range up field and down without fear that it would leave the USMNT defense exposed. Against Portugal, when the U.S. controlled more of the game, he was alongside Beckerman on the right in a 4-2-3-1.

Again, Jones ranged much higher up the field than Beckerman, with the Real Salt Lake midfielder serving as a security blanket behind him. Again, Jones was able to channel his irrepressible energy and use it to the American advantage, chugging forward up the right side where the U.S. was making hay through Fabian Johnson and Graham Zusi. His passing reveals as much. A chart of his defensive works shows just how much ground he covered, with most of his actions on that side of the ball coming deep, and just as often on the left as on the right.

Maybe, in retrospect, the calls to drop Jermaine Jones from the lineup weren’t all that off base. Maybe it wasn’t Jones himself that was the problem, however. Instead, it was a system and a lineup that failed to make full use of his abilities. Maybe, all Jones needed to thrive was Kyle Beckerman.