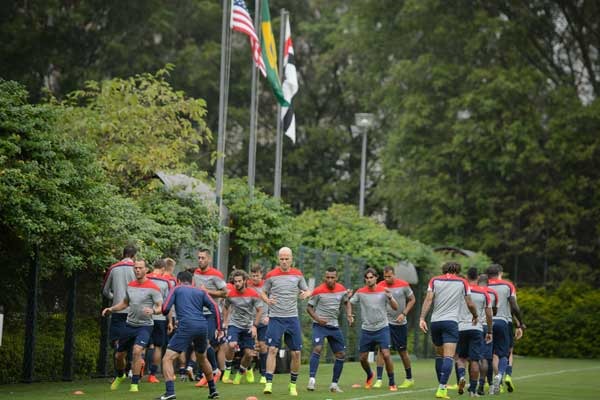 By J Hutcherson – WASHINGTON, DC (June 12, 2014) US Soccer Players – Leave it to Landon Donovan to say what USMNT head coach Jurgen Klinsmann should’ve said when asked about the team’s chances in the 2014 World Cup. Coach Klinsmann decided to manage expectations, letting USMNT fans know that the team wouldn’t be lifting the World Cup. That provoked the expected response from American sports fans, carrying the conversation beyond soccer. Yesterday, on ESPN’s World Cup preview show, Landon Donovan might have had the last best word prior to the start of the tournament.

You might remember Landon Donovan as the all-time leading goal scorer for the USMNT. The player Jurgen Klinsmann decided was good enough for the 30-man provisional roster but not the 23-man roster is spending the MLS World Cup break working as a pundit for ESPN. It’s a role that already suits him.

In his first opportunity on an ESPN broadcast, Donovan addressed Klinsmann’s comments about the USMNT at the 2014 World Cup.

One point I’d like to make is that if we’re really expecting to go out and beat Portugal and beat Ghana and beat Germany, in my opinion Germany is one of the best teams in the world. If you can beat Germany, why can’t you beat anyone else. It doesn’t mean it’s going to happen, but I believe it and I think all of America believes we can do it.”

In fairness to Jurgen Klinsmann, he did describe the scenario the USMNT faced in actually winning the World Cup as winning seven consecutive World Cup finals. He has a point, but so does Donovan. World Cups aren’t normally won by a team sweeping away all opponents. World Cup winners lose group stage games, they advance from penalties in the knockout rounds, and occasionally they get very lucky.

Klinsmann’s choice of words downplays most of that. Again, it’s an old exercise in managing expectations that doesn’t fit. That’s not an indication of Americans being Americans, adopting a never say die attitude regardless of the odds. It’s more about recognizing that 32 teams have a chance that it took two years to earn. The USMNT is the champion of CONCACAF, qualified in 1st-place among CONCACAF teams, and is currently 13th in the FIFA Rankings. None of that happened by accident or outrageous fortune.

In fact, the biggest issues the USMNT faces entering the 2014 World Cup are mostly of Jurgen Klinsmann’s creation. You’ll notice the use of ‘issues’ instead of ‘problems’ since the coach earns the benefit of the doubt. Klinsmann’s roster, Klinsmann’s strategy on the field, and Klinsmann’s approach to media engagement. You can go ahead and keep that in order for how important they are for the team’s success at this World Cup.

What Klinsmann’s words create is an attempt to tweak the idea of success. Right now, it’s a moving target. Beating Ghana is success, though it doesn’t necessarily mean the USMNT will be in position to advance on the final match day. If the USMNT wins, it’s not losing to Portugal. Then it’s whatever is necessary to qualify against Germany. Then it’s the knockout round. At no point does Klinsmann or his team get a pass. At no point does any potential game become the step too far before its played.

Klinsmann wasn’t around the USMNT when it revived what looked like a disastrous group stage to take a two-goal lead against Brazil in the finals of the Confederations Cup. It’s a fair assumption what Klinsmann would say about the relative strength of the Confederations Cup vs the World Cup. That’s not exactly the point. It’s that the USMNT and its fans already know what a run at a top tournament looks like. As importantly, they know what it feels like.

The key to what Donovan said and what Klinsmann misses is ‘if.’ That’s the hope that makes two years and as many as seven more games against the world’s best worth it.