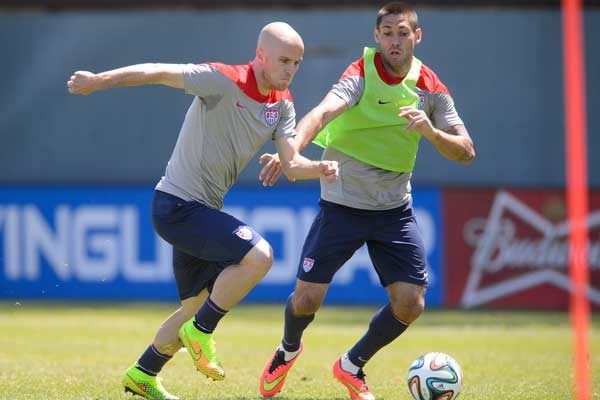 By Clemente Lisi – NEW YORK, NY (June 2, 2014) US Soccer Players – Although the attention of soccer fans is squarely on the 2014 World Cup, there’s no reason to ignore MLS. Although MLS will take a two-week break starting June 11, in time for the World Cup opener, you can still get your domestic league fix by tuning into what’s going on in Brazil.

For the USMNT, the growth and development of MLS over the past few years has been vital to the success of the National Team. In many ways, this World Cup will be a referendum on the league’s growth and ability to create and foster competitive players. Against Turkey, USMNT coach Jurgen Klinsmann started six MLS-based players – another sign of MLS’s huge contribution to the National Team.

“MLS is a very important piece to the success of the National Team,” Michael Bradley said before the USA’s 2-1 win against Turkey Sunday at Red Bull Arena. “MLS is growing, competitive, very physical — everything you need to prepare for a World Cup.”

Even US midfielder Jermaine Jones, who has never played in MLS, observed: “I don’t know what you can say about the MLS guys, I mean, they never give up. It’s a hard fight to come to this (US) roster but all the guys that are going now to the World Cup have a reason for going…. They have a good focus. I hope that we will play a good World Cup.”

Here are five players to watch out for in Brazil:

Toronto FC midfielder Michael Bradley will play in his second World Cup – only one of five players with previous tournament experience on the USMNT. Klinsmann will be relying on him to get the attack going. Michael Bradley’s time abroad over the past few years – especially in Italy with Serie A sides Chievo Verona and AS Roma – have made him a better player and boosted his field cred. So far this season, Bradley has six MLS (he started all of them) and has scored once.

Like Bradley, the USMNT’s hopes of getting past Germany, Portugal, and Ghana rest on Clint Dempsey’s performance. The Seattle Sounders striker is in great form lately. The hope among US fans is that it translates into goals. He is entering his third World Cup first as team captain. So far this MLS season, Dempsey has recorded eight goals and three assists in nine games. He also had a solid game against Turkey, scoring the team’s second goal.

The 34-year-old attacking midfielder has excelled with the Red Bulls over the past few years and takes that experience as he leads Australia at the World Cup. For Cahill, it will be his third World Cup and he has the ability to make his teammates better as well as score a key times. His two goals at the 2006 tournament against Japan in a 3-1 come-from-behind win remains the stuff of legend Down Under. In MLS this season, Cahill has scored one goal in seven games and continues to shine alongside Thierry Henry.

As the starting goalkeeper for the host nation, all eyes will be on the Toronto FC goalkeeper. The 34-year-old, who is on loan from QPR, is set to return to the recently promoted Premier League club, meaning we won’t be seeing him in MLS again. Cesar played seven MLS games this season, conceding just nine goals and serving as a mentor to back-up Joe Bendik.

The imposing 6-foot-2 striker has been a big part of the Revolution’s rebirth this season. He hopes to do the same for his homeland. Having scored once in five games so far this season in MLS, Bengtson could be an X-Factor – one of those players who could make a splash at the tournament. A former scoring champion in Honduras, Bengtson should team up with striker Carlo Costly, no stranger to American soccer fans. Bengtson could surprise opponents at the World Cup with his ability to create scoring chances for himself.