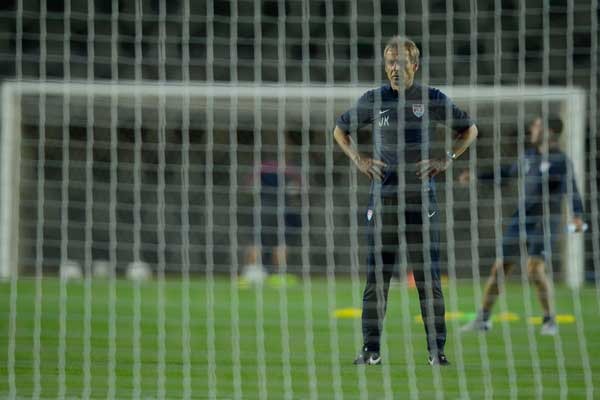 By J Hutcherson – WASHINGTON, DC (June 30, 2014) US Soccer Players – Belgium and the USMNT meet in the 2014 World Cup Round of 16 at Salvador’s Arena Fonte Nova. Both teams will already know if they’ll meet Argentina or Switzerland from Tuesday’s early game (12pm ET – ESPN).

Scouting any team coming out of the group stage is difficult, but Belgium compounds the problem. Belgium coach Marc Wilmots believes in exploring the depths of his squad in game situations, using 20 players during the three games in World Cup Group H.

For the USMNT, there’s a simple scenario to trouble the Belgium coaching staff. Will they play the USMNT we saw for most of the group stage, or does Jozy Altidore return to full fitness in time to make Tuesday’s Round of 16 game?

It’s not so much what Jozy Altidore may or may not bring in terms of his individual performance. Instead, it’s what he represents. USMNT coach Jurgen Klinsmann built his offense around Altidore, and without him the tactics change. Clint Dempsey plays as a lone striker, an unfamiliar role. Michael Bradley pushes up, also an unfamiliar role at USMNT level. It resets the USMNT, and the players have shown that they can adjust. But it wasn’t Klinsmann’s plan or his preferred strategy. That makes it difficult for Belgium if they’re seriously scouting the USMNT. They could see a different style on Tuesday or they could see more of the same that matched well against better UEFA teams.

USMNT against Portugal and Germany

Portugal was left with no excuses in their draw with the USMNT in the second game of World Cup Group G. Portugal was lucky not to lose and they knew it. Germany decided to play up their game following a 1-0 win in the final day of Group G, but they also underestimated the USMNT. Joachim Low might have stressed organization and shots on goal, but Germany had issues figuring out what to do with time on the ball and raised concerns over basic shot selection. Taken as 180 minutes for other teams to try to figure out the USMNT, there’s not a lot there. If you target one side of the USMNT defense, they’ll adjust. If you hope for an opportunistic cross in the dying minutes of the game, good luck with that.

It’s an interesting time for CONCACAF. Shaking off a reputation for graft in the FIFA bureaucracy, the region is now showing they can compete at World Cup level. Yes, Mexico made it six World Cups in a row where they went home after a Round of 16 loss, but they gave up very little against the Netherlands. We might as well refer to the Netherlands as the team that ended tiki-taka at World Cup level after a demolition job against Spain. Short of winning the 2014 World Cup, that will be the Dutch legacy from this tournament. Yet, Mexico was right there with them over 90 minutes in a knockout game. Later that day, Costa Rica advanced on penalties after playing from the 66th minute a man down. Sure, Honduras did so poorly in Group E there’s a real chance they become the worst team in the World Cup when FIFA releases the technical report. It’s worth remembering many people thought they’d have company from their CONCACAF cohorts. That didn’t happen. Meanwhile, Europe and Africa raised significant questions with several teams that ended up utter disappointments.

As good as Tim Howard has been in this World Cup, there’s still the feeling that he hasn’t had a signature game. We’ve seen that from Howard in the past, where he continues the Kasey Keller legacy by simply refusing to let the other team score. So far, Howard plays with his defense. His individual game is there, his saves are impressive, but they’re part of a whole. What we’re waiting for is Howard to take over a game. He’s already one of the top goalkeepers in the Premier League, the best in CONCACAF, and he can take his moment. Whether or not that’s against Belgium in the Round of 16, anybody looking at what the USMNT did during qualifying will learn that every now and then you’re not beating Howard.