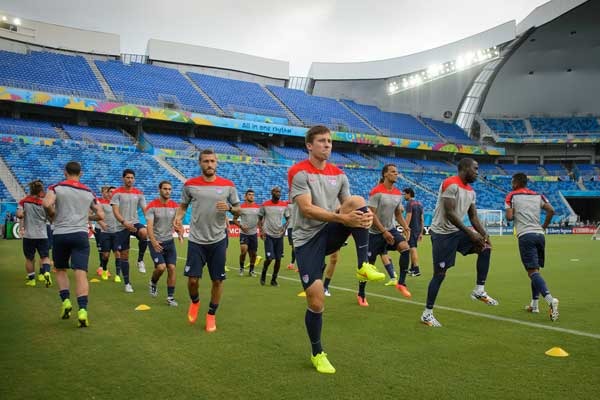 By J Hutcherson – WASHINGTON, DC (June 16, 2014) US Soccer Players – It’s finally time to play a World Cup game that counts. For the USMNT, this means trying to change the story line that makes Ghana their World Cup problem every four years. Beating Ghana alone isn’t enough to insure a fourth World Cup game, but it’s certainly a major step to qualifying for the knockout round. Points are on offer, and the USMNT and its fans will already know what happened in the other Group G game.

Anybody who wanted to press the mute button on the TV or on twitter when anybody brought up goal difference during the first games of the group stage should’ve gone right ahead. It’s silly at this point. Discussing tiebreakers during the opening game is a ‘look at me, I know what I’m talking about’ excuse for punditry. Spain losing to the Netherlands by 4 goals isn’t going to decide who advances from Group B. What Spain does against Chile and Australia is going to decide who advances from Group B.

It’s a similar situation for Group G, where there are two obvious favorites. What Ghana and the USMNT need from Monday is a draw in the Germany vs Portugal game. That’s the best scenario for both of them, regardless of what happens later that night.

Turning problem into opportunity is easy enough in theory. For Ghana and the USMNT, it’s turning stacked odds into opportunity that’s the obstacle. Group G isn’t the Group of Death for Germany and Portugal. It’s the group of obvious expectation. It’s also a situation where Ghana and the USMNT get a chance at disrupting the narrative after playing each other. As important as the opener is for both of those teams, there’s a lot left to do in Group G after Monday’s games.

What’s already clear at the 2014 World Cup is that overmatched teams can do almost everything right over 90 minutes and still lose. Aside from the Netherlands deciding to subvert the narrative against Spain, we’ve seen Brazil and Argentina struggle and still win.

Nobody should take how either of those two favorites played during their opener as indications that another team in their groups will take advantage. It’s not even tweaking the strategy for either of those teams. It’s understanding that they have some of the world’s best and eventually the necessary shot will fall.

Argentina beat Bosnia & Herzegovina on Sunday night because Lionel Messi decided ‘why not’ as his mark ran into a teammate at the top of the box. There’s no coachable moment for Iran or Nigeria.

ESPN at the World Cup

For those of you only paying attention to how networks cover the World Cup in your own country, you might’ve missed the response to what’s happening in Britain. The coverage hasn’t exactly gone without incident. Here’s a quick checklist for what not to do during World Cup broadcasts.

However, the one thing separating the BBC and ITV’s issues from what ESPN is doing for the American audience is obvious. England played already. Later today, we get a look at how that will work for ESPN when the USMNT takes the field. Unlike say, Mexico on Friday, ESPN dedicated hours of original programming to the USMNT at this World Cup. This is ESPN’s moment. They haven’t hedged by covering the tournament as a whole. The focus is on covering the US team for a US audience. Whatever happens on Monday night, how ESPN relays the events is its own story.