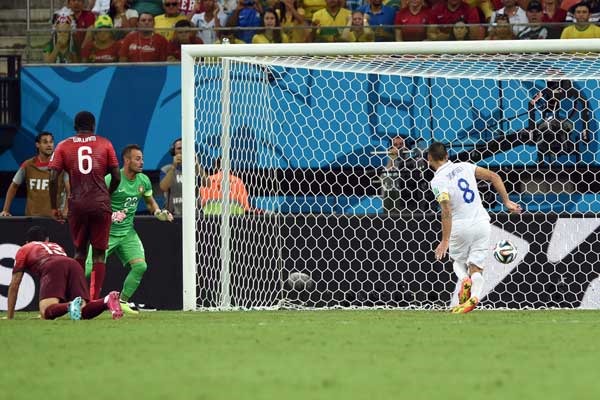 By Tony Edwards – San Jose, CA (June 24, 2014) US Soccer Players – We’re hearing a lot about the scoring at the 2014 World Cup. While it’s probably safe to say this won’t be another 2006 where a defender wins player of the tournament, it is safe to say that without a big time player on your team, you’re not going anywhere. For now, the days of Greece in 2004 are done. Coaches of teams with a legitimate shot to win the World Cup are using systems to maximize attack, rather than to minimize mistakes. Well, at least so far.

The ball is better? It’s a fluke? There’s overmatched teams in the group stage? The goalies aren’t so great? Let’s answer with ‘maybe’ to all of those.

Success at any World Cup comes from maximizing your team’s strengths going forward and minimizing your weaknesses in defense. Basic. Yeah. More difficult than it sounds? Absolutely.

For all the talk about playing five at the back/three central defenders and two wingbacks, those teams playing that system with success have players used to doing so. Whatever system a coach uses, he’s working with limited options. At a short tournament, you have to win, not just draw your way to the playoffs.

I’d argue that one of the main reasons there’s been more goals this year has been we’re in an up year for attackers and a bit of a down cycle for defenders and goalkeepers.

Switzerland loses a defensive linchpin, and all of a sudden France rumbles. Spain can’t contain the Netherlands’ width and two world class players expose space. Germany can attack effectively, which won’t be news to the USMNT staff.

What we’re going to see in the knock out rounds are more typical 2-1 and 1-0 scores. The teams that are more composed in defense, and have goalkeepers playing well are going to thrive as usual. It’s no mistake that Tim Howard was the man of the match on Sunday.

I’d also maybe argue that with less emphasis on possession by many teams, and more emphasis on counterattack, good strikers will beat good defenders. Clint Dempsey, Robin van Persie, Luis Suarez one on one or even one on two? Any coach will take their chances a few times a game.

As we approach the restart of the MLS season, which team faces the most difficult travel this week?

The Galaxy plays in Cary, North Carolina in an Open Cup game on Wednesday. Then there’s a long flight to Northern California where they play San Jose at Stanford Stadium. It’s worth remembering that the Galaxy aren’t in a playoff position and have a brutal July schedule (home to Portland, Salt Lake, and New England, away to Kansas City and Seattle). Even though this weekend will only be their 13th MLS game, mediocrity in June and July won’t help.

What is perhaps the biggest issue facing the Whitecaps as League play resumes?

As this article in the Province notes, it’s who plays in central defense. Vancouver has allowed 20 goals in 13 games. Let’s put that in perspective. Of the teams in the Western Conference in a playoff position (the Whitecaps are fifth), only the Rapids have conceded fewer goals. With Jay DeMerit out another month, Vancouver’s first round draft pick (third overall), Christian Dean, from Cal, may well get the nod to make his first MLS start tomorrow night.

What were the benefits of the World Cup break for Real Salt Lake?

USMNT defender Tony Beltran told the Deseret News two: the chance to get healthy and the chance to recharge. “Especially with the World Cup, guys go away for a week and spend time with friends and family and they’re watching these games, they’re biting at the bit to get out here and start training. The intensity out here today, with the U.S. playing, was one of the best practices of the year. It’s exciting.”

The skill level and competition increases, but the love of the game doesn’t. That’s good to hear from any player in any sport. Oddly enough, Beltran gets another week off, serving a suspension for receiving a red card.

Which MLS team needs to watch the yellow cards this weekend?

Well, sure all of them do, but the Red Bulls have three players (Armando, Sam, and Olave) within one yellow of being suspended. As you’d expect, there’s a few defensive midfielders (Alonso, Laba, and Chara) one booking away from a suspension.