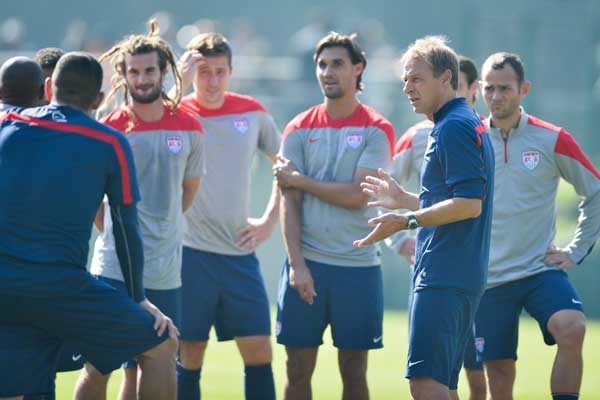 By J Hutcherson – WASHINGTON, DC (June 25, 2014) US Soccer Players – The obvious answer is yes, since the USMNT plays Germany on Thursday in a World Cup where there aren’t any overmatched teams. Disappointing teams, sure, but the hallmark of Brazil 2014 is competitiveness. The USMNT is certainly competitive, doing their part to rewrite the story in Group G – aka the Group of Death.

What needs to happen against Germany on Thursday (12pm ET – ESPN) is more of the same from the USMNT. They need to play to their strengths, keep focus, and take responsibility for their game. It’s that last bit that raised some concerns following Portugal’s last minute equalizer on Sunday.

The USMNT went from underdog turned contender to problem in the space of a few seconds, with many member of the US media looking to assess blame. Was it USMNT coach Jurgen Klinsmann’s fault for using a stoppage time substitute and adding more time to the referee’s watch? How about Michael Bradley, who gave up the ball to start Portugal’s scoring sequence? Or maybe DaMarcus Beasley who wasn’t man-marking Cristiano Ronaldo? How about the USMNT defense as a whole, who didn’t seem in sync with the run of play as Portugal charged downfield for their equalizer?

For the USMNT itself, the response was that it doesn’t matter. The group ended up conceding a late goal and now has to get a result in their final Group G game. They accepted that quickly and moved on to the next stage in their World Cup progression. If they can do it, so can everyone else.

Of course, for this to work the USMNT has to qualify. Even then, there will be pundits and fans pointing at the table should the USMNT not qualify in 1st-place.

On the field, Jurgen Klinsmann still has some issues he can choose to address. Clint Dempsey as the lone striker isn’t the best idea. With Klinsmann’s decision forced due to Jozy Altidore’s injury, he now knows what Dempsey up front looks like over 90 minutes. For all the good work Dempsey put in against Portugal, he’s better playing behind a true target forward. That’s Aron Johannsson or Chris Wondolowski in the USMNT squad, and that should be a tough decision for Klinsmann to make.

If Klinsmann sticks with Dempsey, he needs another standout game from Jermaine Jones. For all the good work Jones has done playing a more roving role than normal, he’s not going to surprise Germany the way he did Portugal. Jones is a known quantity for Bundesliga players. Two of his former Schalke teammates are in Germany’s World Cup squad. Dempsey is better suited playing a disruptive role behind a forward and taking chances with long-range shots.

There’s also the issue of where to play Michael Bradley. It’s clear that Bradley is too forward in Klinsmann’s current setup, and moving him back doesn’t necessarily create a domino effect for the USMNT. Bradley is an excellent defensive midfielder in the setup the USMNT used throughout qualifying. Letting him play that game could make a difference against Germany.

The win over Ghana and the almost win against Portugal raised expectations, and that’s a good thing. The World Cup is about pressure, and the USMNT knew going into the tournament that they had no easy games.

It’s still worth remembering how this was supposed to play out. The USMNT vs Germany Group G finale shouldn’t be for 1st-place in the group with the USMNT and Germany tied on points. It was supposed to be the USMNT hoping Germany had already comfortably qualified in first, with the USMNT taking advantage and using that game to seal 2nd-place. Instead, it’s a competitive game for both teams with 1st-place on the line and qualification for both still in play.

That’s why the focus on multiple scenarios for the USMNT going through without actually tying or beating Germany are insulting to this team at this World Cup. The USMNT has done more than enough to show they can perform at the level required to get out of Group G. They’ve won the mindset that puts their progress solely in their hands. Anything else is reverting to an older understanding of what it means to be the USMNT.