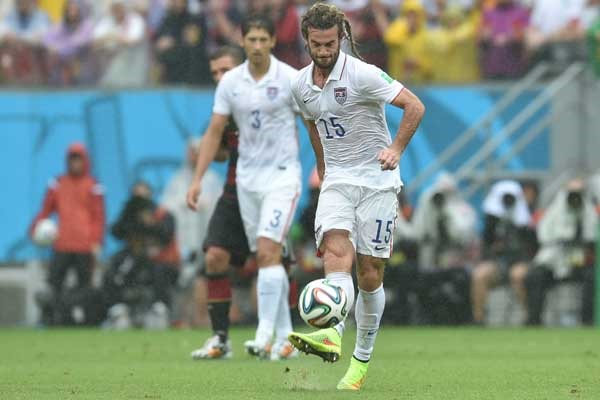 By J Hutcherson – WASHINGTON, DC (June 26, 2014) US Soccer Players – The USMNT had trouble with Germany in the final match day of 2014 World Cup Group G, but ultimately progressed to the Round of 16. What went right against Germany was the USMNT staying in position to advance. After all, that’s the point in what was widely advertised as the Group of Death.

There’s always the tendency to treat each game of a World Cup group stage in isolation. Highlighting the good and the bad game-to-game makes sense, even if it doesn’t necessarily mean very much. That’s because what happens in the other games normally matters. Clean sweeps with one team winning all three games are rare. Goal difference normally matters. What happened to the USMNT in Group G was World Cup business as usual. They got through, and trying to tease out what might have happened isn’t the point.

Hey, it’s the old line about both teams having to deal with the same conditions. In Recife, that meant rain and lots of it. Both teams had to adjust, with the field unavailable for pre-game warm-ups. Those happened behind the goal to save the playing surface. Germany spent most of the opening ten minutes passing the ball around without much in the way of pressure. Why? Well, if you needed to get your timing together on a wet playing surface, what would you do? The USMNT didn’t attempt to break up that passing game Germany played. Though it didn’t end up with a Germany version of tiki-taka and the ball in the back of the net, it did give Germany an advantage. They had a better understanding of what the ball would do and what they needed to get their game going.

USMNT coach Jurgen Klinsmann made two changes to his starting lineup against Germany, and the biggest was bringing in Omar Gonzalez in place of Geoff Cameron. Gonzalez had to show what he could do early, and almost put the ball into the back of his own net. Credit Omar Gonzalez for shaking that misplay off, because he ended up crucial for the USMNT. Exposed more than once, Gonzalez made the tackle or got his head on the ball to keep Germany out. He also blended well with the USMNT defense, making sure that Germany would need to work for their chances and keeping calm in the back. Germany did themselves no favors with their attacking moves, trying to isolate Gonzalez and consistently losing out to the MLS defender.

Germany made an offensive substitution at halftime, brining on Miroslov Klose for Lukas Podolski. That’s a #11 in for a #10 with Germany fully committed to the attack. The problem they had over the opening half of soccer was shot selection. Germany tried to blast in balls from distance, they tried running the ball into the box, and they tried crosses. In other words, they tried everything and couldn’t crack the USMNT defense. Part of that is because the USMNT defense did well. Part of it was because Germany seemed caught between trying to use simple attacking moves and trying to complicate matters. Germany had the best half chances in the opening 45 minutes, but they didn’t do enough with them. What opened the scoring for Germany was a rebound opportunity from a corner kick. That shot from distance isn’t the type of opportunity any team normally sees. Germany didn’t do enough with their chances, and that has to be a concern after the draw against Ghana.

Route 1 for the USMNT

The USMNT under Jurgen Klinsmann doesn’t revert to long balls down the middle after nothing else seems to work. They mix them into the run of play, seeing if they can catch a forward running player down field. If that sounds like soccer’s version of football’s long bomb, that’s because it is. Done right, it takes most of the defense out of the run of play and produces 1v1 opportunities with the goalie. Done wrong and done often, and it looks like one of the clichés of lower division soccer from teams without creative players or creative ideas. The USMNT got it more right than wrong, using it to remind Germany that direct play can produce opportunities. Mixed into the playbook, route 1 makes sense for the USMNT and they’re using it well.