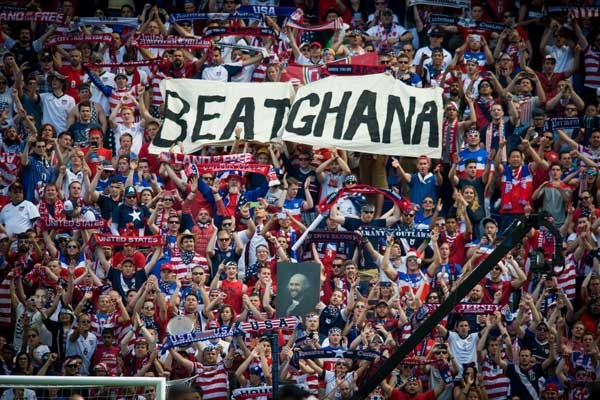 By J Hutcherson – WASHINGTON, DC (June 5, 2014) US Soccer Players – From the day the USMNT learned their 2014 World Cup Group G fate, the focus fell squarely on the opening game. Like the sign in the stands at Sunday’s World Cup warm-up friendly reads, ‘Beat Ghana’. As the standard scenario goes, if the USMNT carries three points into the second match day, they remain in contention to advance.

Yes, that’s obvious. Winning against the weakest of the three opponents puts the USMNT in better shape than a draw or a loss. It’s also key to how the USMNT coaching staff is addressing the group. Ghana gets the importance because it’s the opener and there’s the history between the two teams.

By Brazilian standards, at least, it’s also the closest to a regular game the USMNT plays in the group. There’s no potentially overwhelming odds, no environmental factors, and no excuses. Game one of a three-game set isn’t win or go home, but the stress placed on beating Ghana is enough to certainly make it feel that way.

Is this the best move? USMNT head coach Jurgen Klinsmann faces regular scrutiny for mixing his German football pedigree with things normally not just associated with American sports, but with Americans in general. Whether or not that includes basic American pragmatism is an open question.

At times, Klinsmann seems to embrace the ‘we can beat anybody’ mentality of American sports. However, there’s also the realism of Klinsmann the World Cup veteran. He knows better than to believe in streaking World Cup teams knocking off contender after contender. Still, Klinsmann has been involved with US sports long enough to understand why the American response is always going to be ‘so you’re saying there’s a chance?’

That’s what makes the Ghana focus so interesting. Soccer fans certainly know the history. Two World Cups where Ghana ended the tournament for the USMNT. There’s more to it than that, of course. For one thing, in both of those World Cups Ghana didn’t come first. There were other games and other missed opportunities before Ghana became must win in 2006 and the knockout round opponent in 2010. It’s a three-game tournament. Success or failure rarely relies on one simple scenario.

For the USMNT, what it’s really about is navigating the group. Beating Ghana isn’t enough. It’s a step, and the pressure on that step depends on what happens with Germany and Portugal. The Group G heavyweights could make what happens with Ghana and the USMNT irrelevant. If both of those two favorites win their games against the USMNT in Ghana, Germany and Portugal advance. That’s as obvious a scenario as the ‘beat Ghana’ focus, and one or both of the other two teams in Group G have to be disruptive.

That’s the next step. After all, it’s ‘beat Ghana’ and then…. It might not be ‘beat Portugal’ but it will certainly be ‘don’t lose to Portugal.’ That’s the tagline for the second match day regardless of what happens against Ghana. It’s also how American teams should address a tournament.

Plenty of people like to take shots at what they believe is American naiveté when it comes to something like the World Cup. American exceptionalism doesn’t apply. There’s no motivating a team through a great coach talk that makes a collection of disparate players come together and over achieve. This isn’t college football or Olympic ice hockey. It’s professional athletes playing at the highest level in the world. There’s not much mystery over the contending teams.

Still, this is a USMNT that has played as the typical Americans in previous tournaments. The USMNT pushed past expectations to kick-start the contemporary era of American soccer in the 2002 World Cup. They shook off a disappointing start in the group stage of the 2009 Confederations Cup to make the final. They know what they’re doing, and are fully aware of what can happen in a tournament.

Call it whatever you want, but it’s the American difference. It’s an advantage for a reason, and it’s certainly in play in Group G. So sure, beat Ghana… and Portugal… and why not Germany? After all, measured expectations aren’t a hallmark of American sports for a reason. It’s why we play the game.