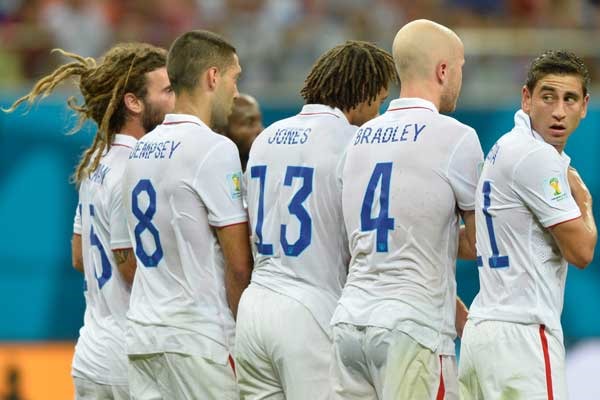 By J Hutcherson – WASHINGTON, DC (June 22, 2014) US Soccer Players – The USMNT showed a complex attack against Portugal in their second Group G World Cup game. Trailing from the 5th minute, the USMNT looked composed at both ends of the field and sent a clear message in Group G.

USMNT Playing without the Lead

Playing without the lead isn’t something most teams want to experience 5 minutes into a World Cup game. That’s where the USMNT was after a missed clearance and a Nani goal for Portugal. Instead of playing with a safety net, the USMNT had to play for an equalizer. That triggered an offense that was mostly absent when the USMNT was playing with the lead against Ghana. The USMNT wasn’t just letting play develop, they were considering their options in Portugal’s attacking third. The USMNT created chances, playing a style of soccer that put more of a mark on the game than what Portugal was doing in their attacking third. Jermaine Jones finally connected with a USMNT shot from distance, but the good attacking ideas were there in and around the box for the USMNT.

DaMarcus Beasley on the Wing

Jason Davis already explained the importance of DaMarcus Beasley’s game for the USMNT following the World Cup opener. Against Portugal, Beasley underlined a few of those points. It’s poise on the ball, a willingness to run at speed against elite defenders, and the speed to get in those positions. Beasley was up and down the left side of the field against Portugal, occasionally hanging around in the attacking third after the play developed. That requires two things to be effective. 1. Trust that a teammate fills the defensive role (say hello Alejandro Bedoya), and 2. Speed to get back if necessary. Beasley also picked up Portugal players in the center of defense, adding another responsibility to a lengthy list of duties. Is that too much for one player especially at World Cup level? Perhaps, but when it works like it did against Portugal it makes Beasley and the USMNT look like a tough team to break down. That’s why it’s so important to remember how Portugal scored. It was a missed clearance, not a clear opportunity.

Paulo Bento in Goal for Portugal

With #1 Portugal goalkeeper Rui Patricio out with an injury, backup keeper Paulo Bento looked like a liability. His positioning was questionable and he made pressure moments worse rather than better. Bento was fortunate to take a lead into halftime. Bento’s defense didn’t do much to shield him from USMNT chances. There were gaps in coverage that several USMNT players tried to exploit with shots from distance. It was the right idea. The opportunities were there and Bento wasn’t doing enough to dissuade the attempts. Again, it wasn’t just Bento. The Portugal defense as a whole was questionable, and the USMNT had no problem setting up and looking for opportunities.

Portugal took a 2-0 lead on substitutions by the start of the second-half. Helder Postiga subbed off in the 16th minute for Eder and William subbed on in the 46th minute for Andre Almeida. Postiga subbed off due to an apparent injury. William came on to reinforce a Portugal defense that gave up too much in the center of the field in their defensive third. Portugal defender Ricardo Costa’s knee kept Michael Bradley from equalizing in the 55th minute, with Portugal never looking comfortable defending against the USMNT. It’s an academic question to wonder what Portugal might’ve looked like defensively if they were the ones in need of an equalizer, but it’s hard to imagine it looking very good. Right after the USMNT equalized, Portugal signaled for their third substitution. When USMNT coach Jurgen Klinsmann brought on DeAndre Yedlin in the 72nd minute, it wasn’t to solve a troubling problem.

Everyone assumed Cristiano Ronaldo wouldn’t be at 100% for the game against the USMNT, and that certainly seemed to be the case. After an early run against the right side of the USMNT defense, Ronaldo didn’t look like the usual threat he represents. Instead, Ronaldo didn’t take full advantage of his chances. The most telling was a clear breakaway in the 62nd minute that Ronaldo shot well wide. The USMNT was level two minutes later, highlighting the missed opportunities for Portugal when they had the lead. So, of course, it was Ronaldo making the difference to keep Portugal alive in Group G.