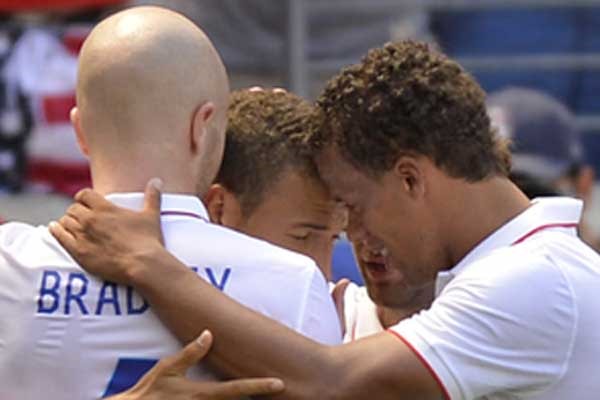 By J Hutcherson - WASHINGTON, DC (June 1, 2014) US Soccer Players – The USMNT showed they could make adjustments in game situations, beating Turkey in a 2014 World Cup warm-up friendly on Sunday at Red Bull Arena. The USMNT overcame several early issues to adjust, take a lead, and hold onto it. Here are five points the USMNT made against Turkey.

Risk vs Reward in a Friendly

Saturday's friendly schedule wasn't kind to Mexico, Ecuador, or Italy. All three teams lost players for the World Cup due to injury. All occurred in what we politely refer to as warm-up games. With so much on the line for these players, it's tough to call these games anything other than tests. Players want to play. Impressing the coach might happen in training, but names on the lineup sheet need production in game situations. That means treating games as the opportunity they represent. That's why Jermaine Jones defended so tenaciously against Turkey. It's why Jozy Altidore takes on so many defensive and disruptive responsibilities. No player wants to give a coach a good reason to reconsider his options this late in World Cup preparations.

Let's get something out of the way. The tendency for the announce team overstressing the negatives with the USMNT isn't new. Ian Darke and Taylor Twellman are good at what they do, but they join a long list of USMNT voices who won't give the team the benefit of the doubt. Without question, the defense had issues. By and large, those issues began to look less important as the game went on. That's the point of a friendly, after all. Training and tactics work themselves out in live game situations. As important as pointing things out that aren't working is explaining the response. Tim Howard clearly marshaled his defenders. The USMNT defenders responded to the problems Turkey created, they adjusted, and their game got better.

Just before Fabian Johnson opened the scoring for the USMNT, there was an obvious talking point from this game. The quality of the USMNT passes. Whether on the ground or in the air, the passing game let the USMNT down. Several times, the speed of the pass was too high to catch the player on the run. Passing quality, as much as the Turkey defense, stifled the USMNT attack. Michael Bradley changed that with one pass. Bradley, a player well established for being able to see a play develop, saw Johnson's run and found him with a great pass. That put to rest any issues with the USMNT passing game.

The Right Side in the First-Half

Tactics again, this time the USMNT choosing to leave space on the right side. There's certainly an argument that it wasn't a choice, but that requires downplaying what the USMNT did right tactically. It's also worth noticing what Turkey did with the opportunity the USMNT originally presented on one side of the field. Turkey didn't do much, and perhaps that's the point. If you're giving up space that the other team can't turn into goals, what have you really given up? Missed shots are just that. If you're going to criticize the USMNT for open space, you have to criticize the other team for not taking full advantage. Otherwise, it's just something that happened. The USMNT adjusted without giving up a goal.

Nothing says 'friendly' in soccer like swapping goalkeepers at halftime. With only three friendlies and Tim Howard clearly USMNT coach Jurgen Klinsmann's #1, there aren't a lot of alternatives. This isn't the old days when Brad Friedel and Kasey Keller traded games at World Cup level. It's Howard starting and Guzan backing him up with Nick Rimando available if needed. Still, subbing out the goalkeeper completely changes a game defensively. That's not necessarily a criticism. It's just worth remembering when trying to build on what did or didn't work in the first-half.