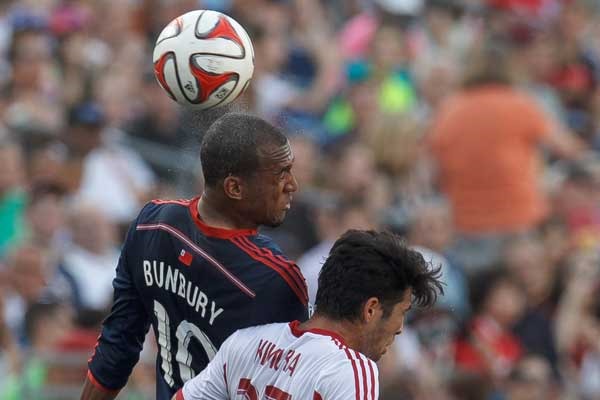 By Jason Davis – WASHINGTON, DC (June 10, 2014) US Soccer Players – It wouldn’t be MLS if their World Cup break meant the league signed off at the end of the weekend. No, MLs opts to cut it close to the start of the World Cup. That means two Wednesday night matches, the day before the 2014 World Cup kicks off in Brazil.

Despite players who will participate in the proceedings in Brazil departing for their national team camps weeks ago, MLS trudged on without them. We don’t yet know how much the World Cup will impact MLS. For a handful of clubs, the pre-World Cup period represents an opportunity lost. Games against harder hit sides came and went without them taking advantage.

What we can be certain of now is that the World Cup break comes as a relief for many teams across MLS. Everyone could do with a bit of a rest to recharge the batteries. MLS clubs still face U.S. Open Cup games during the break, something that drew the ire of at least one MLS coach. When is a break not really a break? When it involves MLS.

A snapshot of the MLS standings on the eve of the World Cup reveals a competition still very much in flux. Seattle deserves their spot atop the Western Conference standings, and looks like a real threat to list the MLS Cup come December. Real Salt Lake’s skill in finding depth and making it work within their system stands them in good stand to make another deep run, regardless of their recent downturn. The Galaxy have all the tools to be among the league’s best teams, and yet sit outside the playoff spaces (in part because of their limited MLS schedule so far, but a depressing reality nonetheless).

Even if you follow MLS closely – perhaps especially if you follow MLS closely – it’s a surprise to see the Rapids and FC Dallas in playoff positions. FC Dallas went eight games without a win before beating Colorado on Saturday. They sit in 4th-place ahead of teams like Vancouver, Portland, and the Galaxy. Colorado has had their good moments in 2014, but hardly looks like the third best team in the West. Of course, for both teams, the unbalanced schedule has conspired to flatter them.

In the East, nothing about the table seems permanent. How good are the Revolution, exactly? Jay Heaps’s team took a sudden dip in form over the past two weeks with losses to last place Montreal and a depleted New York. The Revs remain among the most dangerous attacking teams in MLS. Sporting’s issues with defensive depth and the sale of Oriel Rosell make them something of an unknown quantity, even with an MLS Cup in the trophy case and a solid second place position in the standings. D.C. United is surprisingly in third, Toronto is getting by without Michael Bradley, and the Red Bulls will head into the break having just now climbed about the red line.

Meanwhile, no one wants to bury the Dynamo despite their issues and seventh place position. Is Philadelphia a lost cause? Does anyone know what to make of a Columbus side that started out so well but is languishing as the break arrives?

We can’t throw the standings out completely at this point, but it’s really tempting to do just that. There is too much variation in games played. Too many teams haven’t had nearly the chance to prove themselves that other clubs have had. World Cup camps took away too many players, leaving game day rosters missing key contributors for reasons other than injury.

Welcoming the World Cup break isn’t just a matter of recent results or injury. However, a chance to treat the post-World Cup period as fresh start and the opportunity to get healthier are the obvious reasons coaches will be happy to have some time off. The break is a period of rest from the intensity of MLS play for everyone, something that should logically help everyone. This is two weeks to step outside of the typical grind and take a deep, restorative breath before MLS charges into the heat of summer.

The break is an additional wrinkle in a season already filled with them. Consider the fate of Portland, a team that dug themselves a significant hole in the West thanks to a simple inability to win games. The Timbers beat Real Salt Lake on Saturday, their third win in four matches, and play FC Dallas on Wednesday night before the break starts. Should Portland win, they’ll leapfrog FC Dallas into 4th-place and a playoff position. The easy assumption would be that the Timbers would like to keep playing and build on their momentum, not stop until June 28.

Don’t underestimate the psychological boost Portland, or any team in a good spot (like Seattle with their hold on first place overall), will get from two weeks of a frozen table. Every time the Timbers peek at the standings, they’ll see themselves in the playoffs. It might not mean much with more than half of the season to go. Then again, considering how difficult it has been for the Timbers to string together wins, heading into the MLS break above the red line is a victory of perseverance.

Now, MLS stops. Its teams (the American ones, anyway) consider how to handle U.S. Open Cup games almost no one will notice with all eyes trained on Brazil. This MLS season, the World Cup break simply adds another question to a lengthy list. With no MLS team clearly separating itself from the rest, what happens when the league games resume is anybody’s guess.