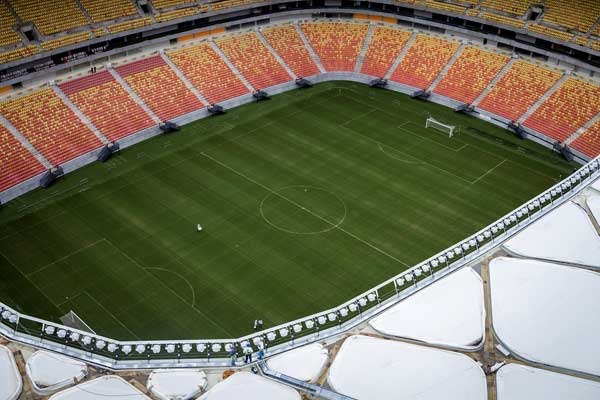 By Jason Davis – WASHINGTON, DC (June 6, 2014) US Soccer Players – We’re less than a week away from the kickoff of games in Brazil, host of the 2014 World Cup and one of the most soccer-obsessed countries on Earth. The conversation over that country’s struggle with the World Cup process looms ominously over what was supposed to be an uplifting celebration of the sport.

Protests loom just like last summer during the Confederations Cup. Then and now, the issue is a government spending so much to host a world event. The Brazilian government’s rampant spending on stadiums that aren’t finished and some that will sit mostly empty when the FIFA hordes leave in July, threaten to make this World Cup as much about the burden of hosting as about the play on the field.

Along with the news that the International Olympic Committee is hemorrhaging candidates to host the 2022 edition of the Winter Olympics, Brazil’s uncomfortable experience raises legitimate questions about what type of nation will step up to host these events in the future.

For many of the cities that originally planned Olympic bids, public opposition is playing a major role in rethinking their candidacies. In Krakow, a public vote went overwhelmingly against hosting the games there. Stockholm’s ruling political party killed that city’s bid, deeming the event to be a poor investment. Oslo, Norway is facing similar hostility among its citizens. The only cities still in the running are Almaty, Kazakhstan, Liev, Ukraine, and Beijing, China.

Ukraine’s political situation makes Liev an unappetizing proposition at best and an untenable one at worst. That leaves Almaty and Beijing, two cities where the citizenry is likely to have little say in the matter, thanks to authoritarian rule in their respective countries. Government leaders can simply decide to spend millions upon millions on lavishly on facilities, hotels, athlete housing, and unnecessary infrastructure without approval from the people. Those same people impacted by wasteful appropriation over the long run.

The World Cup is an even greater commitment than the Olympics, limited as they are to one city and a few satellite locales. The issues host nations face with funding, red tape, coordinating between multiple cities, and the sometimes shameless lack of concern for the event’s long-term legacy are why FIFA secretary general Jerome Valcke infamously said in 2013, while addressing delays in Brazil’s preparations, that “less democracy is sometimes better for organizing a World Cup.”

The reasons why these events lack support are obvious. At least once we move past the nebulous benefits of national and civic pride. Whatever ephemeral gains are to be had from welcoming in legions of fans and putting a city or country on display for a watching world are offset by the enormous costs and inevitable corruption scandals abetted by international sporting organizations thick with graft themselves. Unlike the visiting fans, those headaches are not so quick to go away.

Russia hosts the next World Cup. It’s a country dominated by a singular leader notorious for quashing dissent and retarding the democratic process. In 2022, provided FIFA doesn’t bow to pressure to move the tournament in light of bribery allegations, the World Cup host ia a tiny desert nation controlled by a royal family made morbidly wealthy by natural gas reserves. In both cases, FIFA avoids the troublesome element of popular opposition because such opposition is either ignored or too small to matter.

The plainly corrupted bidding processes could winnow the field further, leaving standing only those with ample resources and the ability to spread them around unilaterally and unscrupulously. For a country like the United States, without government funding to prop up sporting bodies or hosting bids, the tilted playing field is difficult to overcome.

One can’t help but wonder if all of this foreshadows a distressing new template. Some of us are old enough to remember when the World’s Fair was a big deal. The major architecture centerpieces of those fairs are still monuments in cities all over the world. When was the last time you heard anybody mention the next World’s Fair?

The only other variable that matters when it comes to the future of hosting big sporting events is a country’s readiness, irrespective of securing the bid. This is FIFA’s saving grace, should they decide to use it. The Olympics require building a slew of purpose-specific venues most places find little use for after the games are over. The World Cup, on the other hand, only needs modern or updated stadiums with appropriate field dimensions that already exist in places like the United States, Germany, and England.

America’s status as a nation capable of holding the World Cup tomorrow (hyperbole, but not far from the truth) hasn’t won it any consideration from FIFA to this point. It does provide soccer’s bosses an alternative to the authoritarian extremes, a source of leverage and, if necessary, a capable stand-by option.

In the more divided world of the past, where news traveled slowly, cities and countries dreamed of securing the right to host a World Cup or an Olympics. Providing the stage for the pinnacle of human athletic competition was a matter of pride, and in some cases, propaganda. Hosting was an opportunity to put a nation’s way of life on display in a way no other medium could provide. Bidding or not bidding was rarely a question of cost, but instead a question of aspiration and competition. Potential hosts desperately wanted to prove themselves capable.

These are different times. The appetite for grandiose display is waning in light of more pressing local concerns and debt-laden government budgets. Decades of unrepentant malfeasance by organizing bodies is finally souring interest.

Brazil stands as a cautionary tale for any country that might consider the taking on the massive costs associated with preparing for an event that lasts just a month. What the IOC faces now could very well be in FIFA’s none-too-distant future.

The calculus of hosting a World Cup has never been so complicated. Democracy causes problems FIFA would prefer to avoid. Officials with open palms control the process, giving authoritarian governments less bothered by bribery an additional upper hand.

There will certainly be a legacy left on the World Cup bidding process by Brazil’s tormented relationship with the 2014 tournament. Will it be a good one?