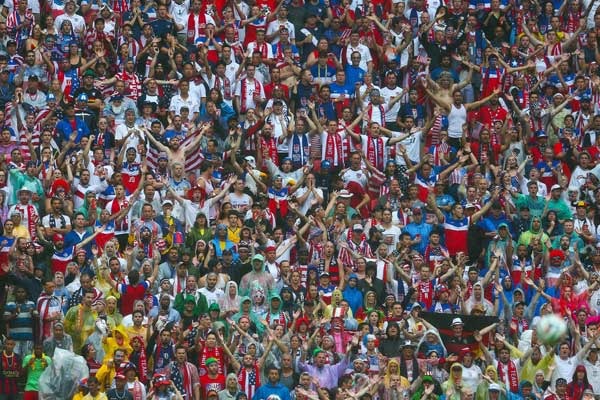 By Clemente Lisi – NEW YORK, NY (June 27, 2014) US Soccer Players – The opening round of the 2014 World Cup has come to an end. The USMNT is off to the Round of 16, where on Tuesday they will take on Belgium. As a result, interest in soccer appears to be at an all-time high in the United States. Local bars are filled with chanting fans and Tim Howard and Clint Dempsey have become part of water cooler conversation. Over in Brazil, scores of Americans are making their voices heard at matches and celebrating along Rio’s famed Copacabana beach.

This World Cup is shaping up to be one of the best in recent memory. Teams are scoring lots of goals, cautious play seems to have been tossed to the side, Luis Suarez bit a player (again!) and we’ve even seen a few surprises. Defending champion Spain is out, as is perennial favorite Italy. On the flip side, Costa Rica is through to the Round of 16, as are three-fourths of CONCACAF nations, and Mexico has never looked so impressive.

What have we learned after 48 games in two weeks? A lot. Here is a by the numbers look at the first round and some of what we’ve learned:

With the exception of Honduras and Ecuador, every team from North/Central and South America has reached the knockout stage. That’s 8 out of 10 teams – only Ecuador and Honduras failed to reach the knockout round. Playing in South America to mostly partisan crowds as certainly helped. CONCACAF, in particular, is the big winner. Cinderella side Costa Rica won Group D, which featured Uruguay, Italy and England (three teams that had all previously won a World Cup). Ditto for the USMNT, who survived Group G – the “Group of Death” – and move on at the expense of Portugal and Ghana. Mexico came close to winning Group A, losing out to Brazil on goal differential. CONCACAF is a difficult confederation to qualify out of – something Americans have always known – and teams from around the world are finally seeing that the region can produce quality teams.

Yes, there have been nearly as many goals in Brazil after the first round (136 for an average of 2.83) than in all of the last World Cup (145 for an average of 2.27). Why the increase? Maybe it’s the tactics teams have decided to employ or, as my colleague Tony Edwards put it earlier this week, “There’s been more goals this year has been we’re in an up year for attackers and a bit of a down cycle for defenders and goalkeepers.” Either way, there have been lots of goals, some lopsided wins and great comebacks. It has all made for an enjoyable time. Let’s see if this hold up in the knockout stage.

Yes, there are lots of goals, but it’s clear from who is scoring that some of the tournament’s biggest stars have stepped up their game. Leo Messi (Argentina), Neymar (Brazil) and Thomas Muller (Germany) lead the pack with 4 goals apiece. Messi seems to have broken out of his shell after a quiet season at Barcelona and is single-handedly leading his team (reminiscent of Diego Maradona in 1986). However, Argentina needs all its forwards to contribute if it wants to go far. Brazil, despite the Mexico game, seems to have found its stride with Neymar clearly the leader. Playing at home as definitely not hurt the Selecao as they try to win a World Cup at home and exorcise the Maracanazo. The Germans, as usual, are solid and Muller remains, in my estimation at least, the most underrated player in the world. The Germans usually go far in the tournament and are the only team, along with the Netherlands, who hail from Europe that are in position to do so.

Costa Rica and Mexico, along with Belgium, are three of the 16 teams that have advanced to the next round to concede the fewest goals — just one. That statistic says a lot, especially in a tournament dominated by so many goals. Mexico’s Guillermo Ochoa put in the best performance of any goalie in the opening round when he shutout Brazil in what turned out to be a hard-fought 0-0 draw. It remains to be seen if Costa Rica and Mexico can continue to shut down opponents. If they do, these two can get far. As for the USA, it will have to find a way to score against Belgium or go home early.

Despite the scoring and overall general consensus that this is an entertaining tournament, there is one statistic that appears troubling. FourFourTwo magazine reported that an analysis of “actual playing time” stood at 55 minutes per game. “That’s over 35 minutes per game with the ball spent out of play, a big jump in downtime from 2010, where the actual playing time averaged 69.8 minutes,” the magazine reported. It may be a case of quality over quantity, but it’s definitely another case of the tiki-taka possession style falling out of favor. Just look at Spain. All the possession in the world did nothing for them since they’ll be watching the rest of the World Cup from their living rooms.