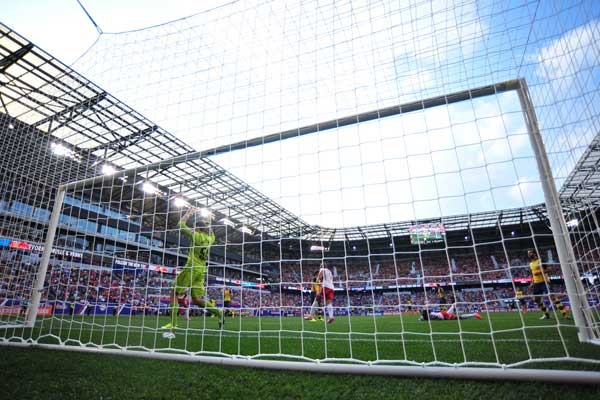 After all, if the Arsenal support is so receptive to the charms of Thierry Henry, he’s available in a New York Red Bulls uniform every home game. It’s an interesting point, one that’s almost unique to the New York Red Bulls when it comes to MLS and their true superstar players. Henry plays with a reputation built at two of the biggest clubs in Europe over multiple seasons. He scored 174 goals for Arsenal and there’s a statue of Henry outside of their stadium. Yet, Petke is right. There’s not the outpouring of local Arsenal support for Henry as an MLS player.

Maybe that’s expecting too much, but it’s still a point worth making. Part of the value in signing a player like Henry is his ability to draw fans. Then again, we are talking about MLS in northern New Jersey. Perhaps there’s another question worth asking. What does Red Bulls home attendance look like without Thierry Henry in the squad?

“I was surprised in the beginning and I was a bit upset, I want these guys to be coming every week. Thierry plays every week and if they love Arsenal that much they should try and come more.” New York Red Bulls coach Mike Petke.

LA Galaxy eager to topple Seattle Sounders, close sizable gap in Supporters’ Shield race – from MLSsoccer.com’s Scott French: “The Western Conference is very tight, and some of the teams near the bottom are actually making a push to make it even tighter.”

Seattle Sounders return to Major League Soccer play after two-week break – from The News Tribune’s Don Ruiz: “I look at the points-per-game totals and not really the point totals,” Schmid said.

End of the Bash Brothers, New England’s state of panic & other Week 20 thoughts – from MLSsoccer.com’s Matthew Doyle: Maybe it was even the best option – we can all remember those late goals and the insanity of Goonie Time.

At home in America – from Soccer America’s Paul Kennedy: “Everybody enjoyed it and nobody wants to go home.”

Is men’s college soccer about to undergo big changes? Many hope so. – from The Washington Post’s Steven Goff: They have proposed turning Division I men’s soccer into a full academic-year sport….

Colorado Rapids’ Vicente Sanchez is an invisible superstar – from The Denver Post’s John Meyer: When he has the ball, he is apt to draw two defenders, and Rapids fans expect something exciting to happen.

Manchester United: five things we have learned from the US tour so far – from The Guardian’s Jamie Jackson: Ander Herrera brings dynamism to midfield

Laying the groundwork for success – from The Province’s Ed Willes: On the pitch there were four goals interspersed with great plays and goofy plays.