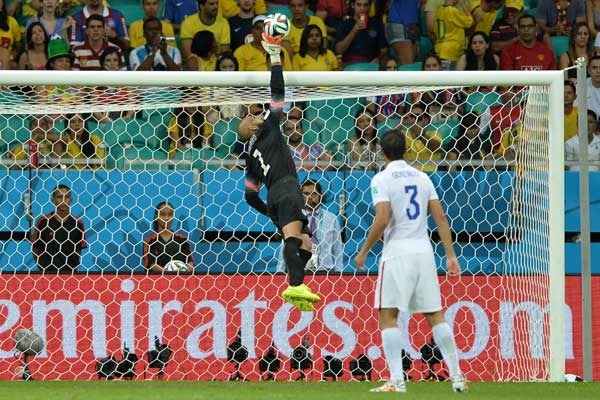 By J Hutcherson – WASHINGTON, DC (July 1, 2014) US Soccer Players – The Belgium vs USMNT Round of 16 World Cup game didn’t set a new mark for style of play. However, it did demonstrate that the USMNT can add to the frustrations of a good team that can’t quite connect. For 90 minutes, the USMNT made it more difficult for Belgium, and that certainly counts.

It’s tough to criticize a team capable of producing so much offense, but Belgium’s crosses never got going. Whether it was an inability to get the ball past the first defender or sending misguided balls into the box hoping for the best, Belgium couldn’t figure out their passing. Obviously, it just takes one to connect and change a game, but Belgium had tremendous difficulty getting a best look from their crosses. Soccer can be about managing frustration, but what happened with Belgium’s passing was beyond that. They were a team denying themselves opportunities.

Nobody should complain about what the USMNT did on the right and left side. Forced to sub on DeAndre Yedlin after Fabian Johnson picked up a hamstring injury in the first-half, very little changed for the USMNT. Yedlin kept them strong on the right and DaMarcus Beasley played his usual standout game on the left. That forced Belgium to try to move the point of attack in ways that didn’t help their offense. Combine that with Belgium’s crosses, and it was an attack struggling to develop its best opportunities. After awhile, the strain of trying to get a good look begins to impact any team. Belgium didn’t struggle to find space and time. They struggled to do very much with it.

It takes more than half chances and sketchy shot selection to beat USMNT goalkeeper Tim Howard when he’s on his game. That was Tim Howard against Belgium, producing another standout goalkeeping performance. Howard didn’t exactly face a barrage of quality shots from Belgium. Instead, he faced chance after chance that kept him active throughout the game. Howard’s concentration had to be high to keep his team in the game. It wasn’t just making saves. It was Howard positioning his defenders not to give anything up. Howard helped guard against problems in his box, the kind of thing that leads to a deflection and an own goal. Howard raised his performance along with his defense, and it made for a frustrating game for Belgium.

Both Belgium and the USMNT built their attacks on the run. That shows more in Belgium’s shot statistics than it does for the USMNT, but both teams turned the middle of the field into a racecourse. That brings fatigue into the picture, with both teams doing a lot of running. All in all, that might’ve favored the USMNT if only slightly. With Belgium having trouble creating quality scoring chances, slowing play would only compound the frustration. Instead, Belgium kept running. The USMNT can run with anybody, and that’s what they did. Instead of the pauses to allow play to develop, the USMNT knew they needed to get back, man mark down the wing, and disrupt Belgium’s entry passes into the box. That was the big accomplishment for the USMNT against Belgium. They impacted Belgium’s shot selection in a way that compounded Belgium’s issues.

The story of Belgium in this World Cup is the liberal use of substitutions. Belgium coach Marc Wilmots’s hey, we have them use them’ attitude is liberal by World Cup standards. It’s also highly questionable at this level. Belgium can credit the quality of their squad, but they’re hardly alone in the depth department. In the best sense, what the in and out of the starting eleven strategy might create is a unified understanding of team. That’s so unlikely from a squad made up players representing Premier League, La Liga, and Bundesliga clubs that it’s silly. These are elite players used to keeping their spot at club level. Making it different at National Team level isn’t likely to make Belgium more competitive. That’s the issue for Wilmots. What does it take to make Belgium more competitive when the level of competition increases?