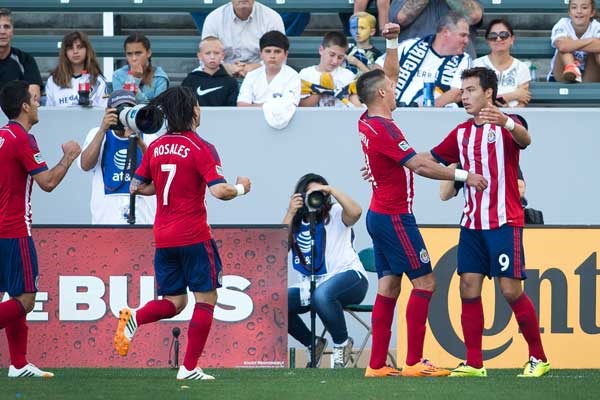 By Luis Bueno – CARSON, CA (July 11, 2014) US Soccer Players – An MLS team nobody rates in a situation nobody envies is quickly becoming a team nobody can beat. Chivas USA have reeled off three consecutive victories and with continued success will shocking enter the Western Conference playoff race.

Since the World Cup break ended, Chivas USA are the top team in MLS. Three consecutive 1-0 wins have propelled the club out of the MLS Western Conference cellar and put the rest of the league on notice.

This team is not a pushover any more.

“There’s no doubt we are improving mentally,” Chivas USA coach Wilmer Cabrera said after the club’s most recent triumph, a stunning 1-0 win over Montreal on Saturday.

Erick “Cubo” Torres helped Chivas USA overcome a difficult situation when he scored on a bicycle kick deep in second-half stoppage time. A team with a fragile mindset may have been content with a point. Two months ago, a scoreless draw would have been a positive. Now, it’s not.

Chivas had a strong road showing the match prior, taking a 1-0 win away from San Jose, a club they had not beaten in their previous eight tries. Gritty, hard-fought performances have only elevated since the break, and players point to overcoming disappointment as the catalyst.

“We’re making some progress and in that process there were some up-and-down moments,” goalkeeper Dan Kennedy said after the Montreal victory.

Chivas USA’s road has been bumpy this season, and part of those bumps include a difficult loss to the Carolina Railhawks. A week after a strong 1-1 draw with the LA Galaxy, Chivas hit the road and tried to progress in the US Open Cup but fell short against the NASL side. It was a bit of a stinging loss, but players found a way to reconcile that defeat.

“We took that bad result in North Carolina and we responded really well from that,” Kennedy said. “We’re focused 100 percent on league and to get nine points in seven or eight days is really fantastic.”

Few may have paid attention to the club’s progress. Chivas USA, after all, is on the chopping block. In the last year of its existence in its current form, the club is simply an oversight, a blight in an otherwise thriving league. Their play on the field had matched that, and the crowds continue to do so.

Belief though is a strong attribute to have, and the club never lacked for it. Even when Chivas were giving points away as they did in New York and Dallas or getting steamrolled by the likes of Portland or Philadelphia, the club maintained their belief. The corner was ahead, and Chivas USA have reached and turned it.

“We are progressing in our job, the way we are approaching the game and how we work on the field,” Cabrera said. “We needed to just continue improving the little details and mistakes that we were making. It took 13 or 14 games to click on but right now we look good, we look solid and confident.”

Already the club has made believers of at least three teams. Also, the club will carry a 325-minute shutout streak into BC Place. No other team in MLS has kept opponents scoreless for longer than that this season.

Chivas USA’s current three-game winning streak is their longest since 2009. A win in Vancouver and the club would match a feat last accomplished in 2008. A fifth consecutive win would set a club record.

Perhaps that seems unattainable. Even a fourth straight win may not seem likely. But Chivas have shown some grit and toughness not seen in Carson for years.

At the very least, the club showed that while its legacy has been tarnished, the final act may not have to be a negative one. All that takes is a little hope.