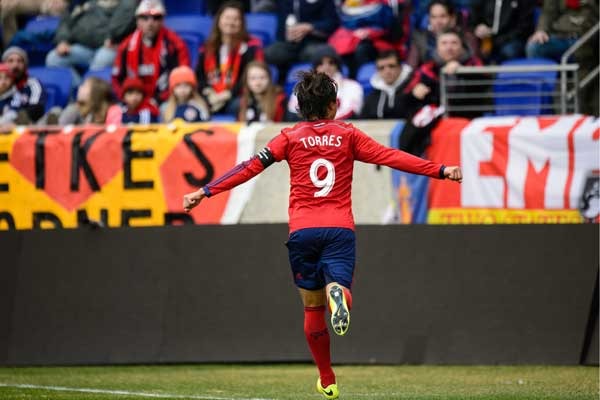 By Jason Davis – WASHINGTON, DC (July 9, 2014) US Soccer Players – Chivas USA is going out, but at least they’re going out with a bang. That’s due to one legitimate star serving notice of his talent throughout MLS. If it’s up to Erick “Cubo” Torres, we’re all witnesses to a player trying to carry a team to respectability.

If that seems like a bit of an oversell on Torres, you probably haven’t seen him play. In a team likely going nowhere but the dustbin of history, Torres is a shining light of immense talent and exciting goals. His latest, an overhead kick against Montreal to secure a third straight win for Chivas, was only another highlight in a line of great efforts from the Mexican striker.

Torres scores spectacular goals often enough that it’s worth wondering if the flash distracts from the rest of this game. A close watch of the forward’s game shows that while the overhead kicks and stunning volleys get most of the headlines. Torres is also developing into a well-rounded player who makes smart runs, contributes defensively, and knows how to put his teammates in good positions.

There’s irony in Torres’ rise to MLS stardom happened in Chivas USA’s final season before rebranding. Chivas USA’s original mandate was to bridge the gap between Southern California’s Mexican-American population and the MLS version of the game. The experiment failed miserably. Any link between Chivas USA and the mother club in Guadalajara will be gone for good after this season.

Chivas Guadalajara is how Torres arrived in LA. After bursting onto the Mexican soccer scene as a young player with the storied club, Torres plateaued. Though the connection between the Mexican side and Jorge Vagara’s MLS club had often been underutilized, Chivas USA made sense as a place for Torres to regain his form and grow into a mature player. Torres made his way north on loan for the 2014 season.

There’s no other way to see the loan to this point other than as a massive success. Torres is scoring goals in a team not good enough to compete without his rampant form. It wouldn’t be unfair to say the 21-year-old is carrying his team, perhaps in a way unique in MLS.

It’s unfortunate that Chivas USA isn’t in a position to capitalize on Torres’ play. It’s unfortunate that he didn’t come along five years sooner, when the team was still trying to make their positioning as the club of choice for Mexican fans in Southern California work. A player the team could sell within its image finally arrives, but he does so just as the Guadalajara owner offloads the team, the organization itself is flailing for relevancy, and the fans stopped showing up.

No one goes to see Erick Torres play at home. There’s something flat wrong about that, though the blame doesn’t fall to Chivas USA’s put-upon fan base. Those that still attend games are a hardy bunch rewarded for their commitment by Torres’ brilliance. They need something to cheer for as the shadow of rebranding looms, and Torres gives them that. It certainly could be worse.

The terms of Torres’ loan to Chivas USA allowed MLS to extend his stay through the end of the season. That’s a good thing for Chivas USA, and it’s a good thing for MLS. As long as Torres is prowling the front line for Wilmer Cabrera, the club won’t completely drop off the national radar. MLS also has an option to buy on Torres, a contractual advantage they should certainly use. Either to keep him on a newly renamed LA team or to sell him on for more money, it’s a deal worth making.

In any other situation, Torres’ name would be up in lights. His image would be all over marketing materials. Not just at StubHub Center or in LA itself, but across MLS as one of the bright young talents that Major League Soccer is trying to build upon. By the very nature of the sport, some of those young stars will leave for richer pastures abroad. Torres is the kind of young player MLS needs in the league.

As long as Torres keeps scoring, MLS fans will have no choice but to pay attention. He could easily become the link between Chivas USA and whatever comes next for LA’s other MLS team. It’s certainly odd to have the league’s top scorer playing for a lame duck franchise, but there’s plenty of silver lining to make it a positive rather than a negative.

Before the year began, the Chivas USA season promised to be one of the more depressing on record. Instead, thanks to the type of young Mexican star the club could have used years ago, they might have an uplifting one. Playoff team or not, Chivas USA will go out with a bang. All thanks to Erick Torres.