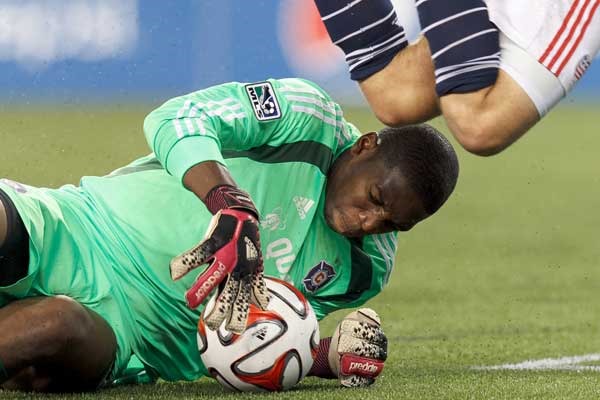 Chivas USA continued their run of form in week 18 of the 2014 MLS season as they try to climb up the standings in the Western Conference. A win over Vancouver moves them up to 7th, trailing the 6th-place LA Galaxy by a point but with 18 games played to the Galaxy’s 15. Also in week 18, Chicago Fire goalkeeper Sean Johnson saved a penalty in a strong showing on the road against the New England Revolution. In Seattle on Sunday night, over 64,000 MLS fans were on hand to see the Cascadia derby. They got what they came to see, with the Seattle Sounders shutting out the Portland Timbers to wrap-up the weekend MLS schedule.

The San Jose Earthquakes and DC United met on Friday night at Buck Shaw Stadium in a game available nationally on NBCSN. Eddie Johnson converted a penalty to put DC United up in the 12th minute and Luis Silva doubled the lead in the 25th. San Jose’s Chris Wondolowski pulled a goal back in the 39th, but that was it for the goal scoring. San Jose plays the New York Red Bulls on July 19th and DC United face red hot Chivas USA on July 20th.

“We find ourselves in a hole again just like last year,” San Jose Earthquakes defender Clarence Goodson said. “You look at our matches this year and there have been stretches when we’ve played well. Then we hit those poor spells and that’s how we give up bad goals. To be fair, we haven’t given up too many goals this year. In regards to a second half resurgence, I think it’s all there for us. We need to find ways to be better for longer stretches. When we are struggling, get back to a better shape and that will minimize goals. If we do that, you will see games like this fall our way.”

The Colorado Rapids came back twice to split the points with the Philadelphia Union at PPL Park on Saturday afternoon. Philadelphia’s Conor Casey scored in the 16th minute. That lead held for all of two minutes with Dillon Serna equalizing in the 18th. Philadelphia got the lead back through Sheanon Williams and looked to be on their way to three points when Andrew Wenger scored in the 74th. Two minutes later, Philadelphia went a man down when the referee sent off Michael Lahoud. Dillon Powers converted a penalty in the 79th and Deshorn Brown equalized in the 86th. Philadelphia would finish with 9 players on the field with Amobi Okugo sent off four minutes into stoppage time. Philadelphia plays the New York Red Bulls in a Wednesday game available on ESPN2. Colorado is at Portland on July 18th.

“Both teams are fighting hard,” Okugo said. “You see players from both teams putting their bodies on the line. We didn’t do a good job holding the lead and after the game, you see a lot of players voicing their frustrations.”

Bradley-Wright Phillips opened the scoring for the New York Red Bulls in the 17th minute at Red Bull Arena. Columbus looked to make a game of it, with Adam Bedell equalizing in the 39th. The Red Bulls had other ideas. Thierry Henry put New York ahead for good in the 45th minute and assisted on Lloyd Sam’s goal in the 56th. Columbus lost a player in the 85th when the referee sent off Bernardo Anor for fighting. Eric Alexander scored New York’s fourth goal in stoppage time. New York is at Philadelphia and Columbus plays Sporting Kansas City at Crew Stadium on Wednesday.

Trailing 2-0 at home after Brad Davis scored in the 13th and 30th minutes, Toronto FC regrouped. Jonathan Osorio scored for Toronto in the 39th minute and Dominic Oduro’s first-half stoppage time goal meant the second-half started even. Jermain Defoe was the difference for Toronto FC in the final 45, scoring in the 63rd and 89th minutes. This is the first time Toronto FC won a game after trailing by two goals. Toronto FC is home to Vancouver on Wednesday with Columbus home to Sporting Kansas City.

“Sometimes in games when you concede and early goal or two, there is such a long way to go in the game you just got to keep cool and just try to get the first goal back before half-time and we managed to do that,” Defoe said.  “Then it is two-to-one and you can really kick on and try to get the second goal.  But it was important to score in the first half because if you go in two-nil down at half time it’s difficult and the teams get confident and may have been more compact.  It was two-two so they still had to come out and try to win the game but that suited us because we hit them with our counter attack.”

“I think there were times that we out played them,” Montreal Impact goalkeeper Troy Perkins said. “We need to be a little sharper in the final third and maybe we walk away with a point. We just need to start believing in ourselves a little more and it’s going to come.”

Our first shutout of the weekend, with the home standing New England Revolution losing to the Chicago Fire. Quincy Amarikwa scored the game’s only goal in the 3rd minute, with Chicago’s Sean Johnson making 7 saves to keep the clean sheet. That included stopping a penalty in the 78th minute. The New England Revolution are at StubHub Center to play the LA Galaxy on Wednesday. Chicago are at the Philadelphia Union on Saturday.

“It was just instinct,” Johnson said of the penalty save. “I think when it comes down to those moments, you kind of have to live in the moment. You don’t really think about it too much. You just kind of react and I just got a good jump on that side and was able to save it. I mix it up in the moment. I’ve gone left, I’ve gone right. I mix it up quite a bit so you never know. If the striker makes it difficult, which he did – it was very well struck – but I was able to get a good jump on it. I was surprised to see it bounce backwards because it was on turf. On grass it just stays put. I was lucky to have the post there. Someone was looking out for me there on that one.”

The rest of MLS would probably appreciate Chivas USA playing like a team in turmoil, playing out the 2014 schedule before their rebranding. Instead, Chivas USA are one of the few initially troubled teams during the 2014 MLS season putting points behind talk of a turnaround. Three more for Chivas USA in a come from behind win over Vancouver at BC Place. Vancouver’s Charlyle Mitchell scored in the 27th minute. Vancouver went a man down in the 69th minute with Jordan Harbey red carded.  Chivas USA’s Agustin Pelletieri equalized in the 47th minute. Erick Torres scored in the 81st as he tries to keep up with Dominic Dwyer and Bradley Wright-Phillips at the top of the MLS scoring table. Leandro Barrera made it 3-1 Chivas USA in the 94th minute. Vancouver is at Toronto on Wednesday with Chivas USA travelling to RFK Stadium to play DC United on Sunday.

A 20th minute Gyasi Zardes goal was the difference for the LA Galaxy in a shutout of Real Salt Lake on Saturday night at StubHub Center. LA Galaxy goalkeeper Jaime Penedo needed 6 saves for the clean sheet. The Galaxy host New England on Wednesday with Real Salt Lake waiting for Saturday’s game against the Vancouver Whitecaps.

“I think we played a fairly solid 90 minutes tonight,” LA Galaxy coach Bruce Arena said. “Had chances to get a second goal on a few occasions in the second half. We could have made the game a little easier. It’s good for us to win a game like this. It’s what I would call a good ugly game against a good team. We did a job good on the defensive end of the field. That was encouraging. Any time you get a shut out speaks volumes for the whole team. I think for the most part we played well and deserved to get the three points tonight. We know we need to get a little bit better. That’s certainly not a perfect performance.”

In a Sunday night game on ESPN2, the Seattle Sounders shutout the Portland Timbers with 64,207 showing up for the Cascadia derby at CenturyLink Field. Clint Dempsey scored for Seattle in the 71st minute with Marco Pappa scoring in the 86th. Seattle dominated the offense with 23 shots to Portland’s 9, putting 10 of those on goal to Portland’s 3. Stefan Frei picked up the shutout for Seattle. Portland hosts Colorado on NBCSN this Friday with Seattle off this week.