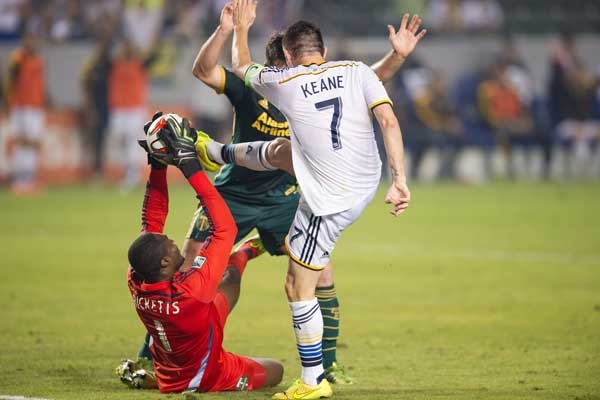 The MLS week 17 weekend schedule kicked off with several games on Friday night for the Fourth of July holiday. The weekend saw some USMNT players return to duty with their MLS teams, with Brad Davis making the difference for Houston in their draw with the New York Red Bulls. Their were USMNT players in the crowds as well, with Tim Howard and Jermaine Jones taking in MLS games in LA.

The Houston Dynamo had to feel pretty good about their chances a minute into their July Fourth showdown with the New York Red Bull at BBVA Compass Stadium. Giles Barnes gave Houston the lead in the opening minute, but New York had an answer. Red Bulls forward Bradley Wright-Phillips equalized in the 13th minute and put New York ahead in the 72nd. Brad Davis split the points with an 82nd minute penalty.

“I think you saw in this game a lot of the fight that we’ve been lacking the last few games,” Houston Dynamo forward Will Bruin said. “To be able to score goals is nice. Those three points are still eluding us but it’s a step in the right direction.”

FC Dallas took the lead when Tesho Akindele scored in the 26th minute at Toyota Stadium, but Philadelphia’s Amobi Okugo equalized just before halftime. An own goal proved the difference, with Sheanon Williams putting the ball in the back of his own net. FC Dallas trailed on shots 11 to 10 and 4 to 2 on shots on goal. The referee sent off Philadelphia’s Maurice Edu in the 89th minute.

“During the second half, the team looked much more mature,” FC Dallas coach Oscar Pareja said. “It showed me a team that knows how to handle the peaks and valleys during a game and that, for me, is great. They controlled the energy and defended pretty well. We finished with a smile on our face because of the three points, because we got some players back, we saw Mauro and Thomas and the guys who are coming out of the nursery and coming onto the field. It was a great Fourth of July.”

Columbus did all the scoring in a 1-1 draw at Dick’s Sporting Goods Park. An own-goal opened the scoring for Colorado in the 59th minute and Ethan Finlay equalized in the 76th.

“For me, I contacted (RSL coach Jeff Cassar) when we landed in Atlanta,” Rimando said. “His first words for me were ‘there’s no pressure at all, we want your body right mentally and physically.’ My answer to him was ‘we’ll see when we land.’ I felt great, let him know that, and woke up this morning with a text from him, asking if we were ready to go. Both of our answers were ‘yes.’”

The action waited until late in a game available nationally on NBCSN. Marcelo Sarvas scored on a Landon Donovan service in the 65th minute, but the Galaxy’s lead didn’t last long. Diego Valeri equalized for Portland in the 67th and Jorge Villafana had them a goal up in the 70th. Portland put the ball into the back of their own net for the Galaxy’s equalizer in the 86th minute.

Toronto FC pressed late but couldn’t come up with a shorthanded equalizer against DC United at BMO Field. Nick DeLeon scored for DC United in the 54th minute with Luke Moore equalizing in the 60th. DC went ahead for good through Perry Kitchen’s goal in the 69th. Playing a man down from the 88th minute when the referee sent off Nick Hagglund, Toronto FC forced a late save from DC United goalkeeper Bill Hamid. USMNT player Michael Bradley returned to the Toronto FC lineup after World Cup duty, starting and playing 61 minutes.

“It hurts a little bit but I thought we did well and that is the way we need to approach games especially when we are at home. We just need to stay positive and keep playing hard,” Toronto FC coach Ryan Nelsen said.

All the Vancouver Whitecaps needed was a 12th minute goal from Sebastian Fernandez to take all three points from Seattle in a Cascadia derby. The Sounders led 14 to 13 on shots, putting 2 of them on goal to Vancouver’s 6. Seattle also led 3 to 0 on corners.

Chivas USA is fighting their way up from the bottom of the Western Conference, picking up three more points with a shutout of the Montreal Impact on Saturday. they left it late, with Erick Torres scoring the winner four minutes into stoppage time at StubHub Center.

Sporting Kansas City’s Dominic Dwyer might have been asking for too much from his team when he celebrated his 33rd minute opener with a selfie photo. That looks a lot better when the team actually wins. Chicago’s Mike Magee leveled the score and split the points with a 40th minute goal. USMNT player Graham Zusi returned to the lineup with Matt Besler left out as a precaution as he continues to recover from his strained hamstring.

“It’s important to get points throughout the season, so a draw is okay,” Sporitng Kansas City midfielder Benny Feilhaber said. “At the end of the year, every single point is going to count, whether you’re getting them home or away. It’s tough not getting three points at home, but we’ll take this result and focus on next week in Montreal.”