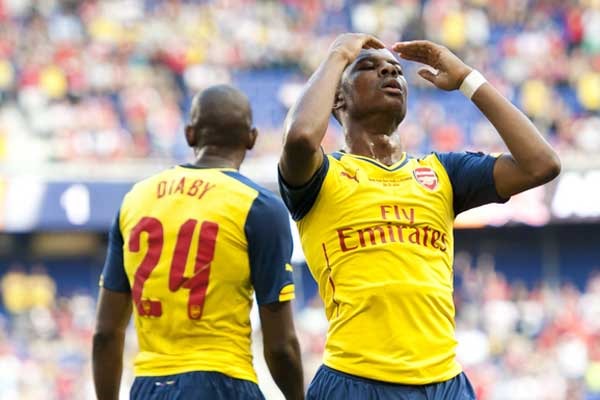 It was a short schedule of league games in week 20 of the 2014 MLS season, with several MLS team involved in friendlies. From the summer soccer friendly schedule, the New York Red Bulls beat Premier League club Arsenal at Red Bull Arena. The last time Arsenal played in the USA was before MLS existed.

Arsenal waited a long time and traveled a long way only to be shutout at Red Bull Arena.  Bradley Wright-Phillips was the difference for the Red Bulls, scoring in the 32nd minute in a sequence started by a Thierry henry corner. Red Bulls goalkeeper Luis Robles held on for the shutout. The game played out in front of a capacity 25,219 crowd at Red Bull Arena.

“I don’t want to play down what happened today, or whatever,” Henry said. “It’s a friendly game. They’re in preseason. Like I said before the game and to the guys in the dressing room before the game, let’s give them  a good game. They haven’t come here in 25 years. At least if they know they’re playing a MLS team that it can be a good game, you know, and hopefully that’s what we did.”

“I’m not upset,” Toronto FC coach Ryan Nelsen said of the loss. “I’m more frustrated for the guys because the game should have been over by half time. If it was a boxing match the referee would have stepped in, well he did step in actually in way that was interesting and very confusing to tell you the truth. But saying that we had all the obvious chances to win the game and we didn’t do it.”

The problems continue for the New England Revolution, falling behind at home in the 43rd minute when Federico Higuain scored for Columbus. New England’s A.J. Soares pulled a goal back in the 50th, but Ethan Finlay scored the Crew’s winner in the 84th. This is the 8th loss in a row for the Revolution.

The worst team in MLS lost another game on Sunday, with Montreal unable to hold up at home against the Portland Timbers. Andres Romero opened the scoring for Montreal in the 13th minute. Maximiliano Urruti equalized for Portland in the 34th minute and a Will Johnson penalty had them in the lead 6 minutes later. Maxim Tissot equalized for Montreal in the 44th minute. Diego Valeri scored Portland’s winner in the 82nd. Portland outshot Montreal 20 to 10, putting 9 of those shots on goal to Portland’s 3.

The Philadelphia Union lost to Premier League opposition at PPL Park on Friday night. Crystal Palace benefitted from a 20th minute own goal to take the game 1-0.

“It was a good experience for our guys to get out and play a game like this because our next game against Kansas City on the road is going to be tough,” Philadelphia defender Maurice Edu said. “We came out a little slow, but improved in the second half and had some good parts out there. It was good to get this game out there and kind of get our legs back under us.”

Spurs had no trouble with the Chicago Fire at Toyota Park on Saturday, adding another win to the Premier League column in the summer soccer friendlies. Harry Kane opened the scoring for Spurs in the 4th minute and Aaron Lennon finished it off in the 84th. Brad Friedel recorded the shutout for Spurs.

“He deserves all the accolades you can give him, to be honest,” Chicago head coach Frank Yallop said of Friedel. “Is he 43? Not bad. He’s in good shape, but I think one of the top, if not the top, goalkeepers we’ve seen from the states. I think he deserved everything he got tonight. I don’t know how much more he’s going to play, but he’s actually a real gentlemen, as well. I know him pretty well too, and he’s a terrific guy – and I think that’s the main thing I look at. He’s a terrific player, obviously, but I think being a really good person like he is, he deserves everything he gets.”

DC United travelled to Jacksonville, Florida to play Championship club Fulham. Moussa Dembele opened the scoring for Fulham in the 21st minute in front of an announced crowd of 52,961 fans at EverBank Field. A post-game concert was part of the draw. Dembele scored his second goal in the 43rd minute. Dembele was good for the hat-trick, scoring his third goal in the 69th minute. Fulham are owned by Jacksonville Jaguars owner Shahid Khan.

“Everything was great here in Jacksonville and we are happy and proud to unite with another team, the Jaguars, which we can say belong to our family,” Fulham manager Felix Magath said. “I was very impressed with the facilities and the way an American Football team is working. You see them on television and you know they are big players, but when you stand beside them you realize how tiny you are!”

MLS continued its struggle against Premier League teams in the summer soccer friendlies, with Houston shutout 1-0 by Aston Villa at BBVA Compass Stadium. Aston Villa left back Joe Bennett headed in a corner for the game’s only goal in he 41st minute. Aston Villa used all of their available outfield players. DaMarcus Beasley was on the bench for the Houston Dynamo.

Believe it or not, this summer soccer friendly went to penalties at Candlestick Park. There was no extra time with the game finishing scoreless. Instead, Atletico Madrid won 4-3 on penalties with San Jose missing on their first attempt.

“What I’ll take away from tonight’s match is that we played well and took a very good team to penalty kicks,” San Jose Earthquakes coach Mark Watson said. “We played 90 minutes against a top team and that means a lot. We would like to be a bit more clinical with our chances, but we’re focused on the overall team performance tonight against one of the top teams in the world.”