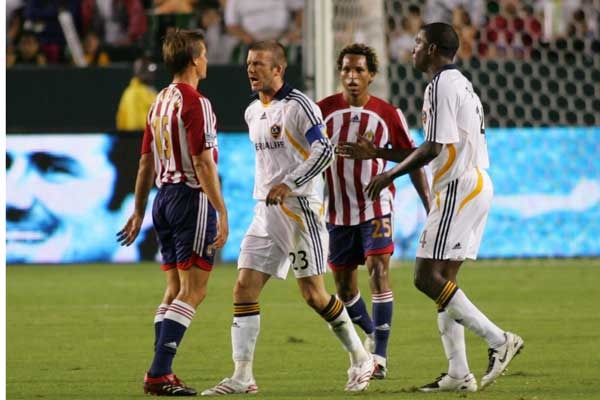 By Luis Bueno – CARSON, CA (Aug 29, 2014) US Soccer Players – At some point in the early years of Chivas USA, the Super Clasico with the LA Galaxy was one of the best rivalries in MLS. With a little time, there was no doubt that Chivas vs Galaxy was going to be unquestionably the top rivalry in the league. All it needed was a bit of history.

Now, the clubs will meet in what is being dubbed the Final Clasico. When the Galaxy “visit” Chivas USA on Sunday, the match will mark the end of a rivalry that never really earned top billing.

The Super Clasico’s main problem was that the Galaxy dominated, through and through. Since 2007, Chivas USA won exactly one match against the Galaxy. Not only have the matches been all Galaxy victories but hardly any of them have been competitive. The Galaxy piled up wins by scores of 3-0, 5-0, 4-0 and 3-1 just in the last three seasons.

Still, the Clasico did produce outstanding moments. Whether it was drama, tension or emotional outbursts, this was a series that touched on the passion and hatred that makes rivalries so riveting. Here are the top 5.

It took six tries but Chivas USA finally beat the Galaxy on the eve of the 2006 World Cup. Galaxy fans claimed the victory was luck and a bit tainted as their star player – Landon Donovan – was in Germany with the US National Team. However, the record books show a Chivas USA win. Ante Razov scored what was the best-ever goal in a Chivas-Galaxy match with a powerful left-footed volley early in the match.

While most of the fans in attendance at the LA Coliseum on August 10, 2005 were there to watch the second half of the Doble Clasico between Chivas Guadalajara and Club America, the Galaxy whetted their appetite by beating Chivas USA. Landon Donovan scored the game’s only goal via the penalty spot and drew cheers from a largely pro-Mexican crowd, something he rarely did.

Chivas USA was on the brink of claiming victory in the first meeting of 2006 when Cornell Glen scored in the 84th minute to pull the Galaxy even. Glen added another goal three minutes into stoppage time as the Galaxy stunned Chivas. Galaxy players’ claims that Chivas owed them rent only grew louder after the match.

There was only one season where both Chivas USA and the Galaxy were competitive, and that season the two met in the MLS Cup Playoffs. The series produced a lively 2-2 first-leg draw and a tense second match decided by a late penalty kick, a questionable call at that. While nobody could have known it then, this series essentially marked the end of the rivalry. Chivas’ ownership problems were fierce already. After Preki left at the conclusion of the series, Chivas went on an on-the-field tailspin from which they never recovered.

David Beckham had his own share of positive Super Clasico moments but his first-ever meeting with Chivas, on Aug. 23, 2007, produced drama as emotions spilled over. Having played the day prior for England, Beckham already was at the center of attention. Beckham took exception to a flying challenge late in the first half, got into Marsch’s face and chaos ensued. The Galaxy’s Kevin Harmse and Chivas’ Alex Zotinca saw red while Marsch got a yellow. Chivas’ Maykel Galindo had a brace and Francisco Mendoza added another as Chivas welcomed Beckham to the Clasico with a win. Afterward, Galaxy coach Frank Yallop had a meltdown, claiming the Galaxy were “knackered” with all the attention that had been thrust their way with Beckham’s arrival.