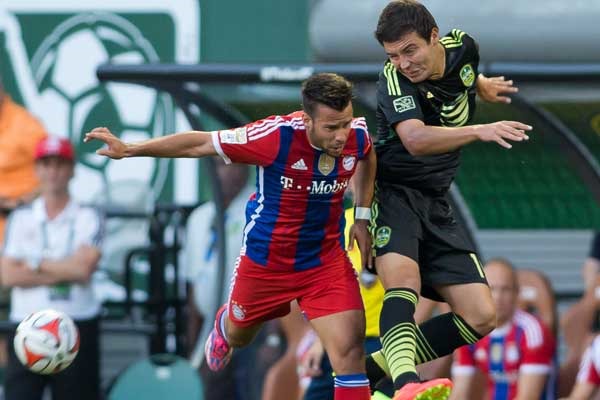 By Luis Bueno – CARSON, CA (Aug 22, 2014) US Soccer Players – The dream that was once Chivas USA is nearly over. There have been flickerings of what-ifs throughout this final season that have only led to more frustration. The latest such incident happened Thursday, when Chivas USA forward Erick “Cubo” Torres got a call up to the Mexico National Team.

Torres, 21, had success in Mexico prior to joining Chivas USA. However, his call-up is due to what he has done in Major League Soccer. Even though he has been in MLS a little more than one year, Torres has done quite a bit.

After joining Chivas USA midway through the 2013 season, Torres quickly became a focal point to the attack, scoring seven goals in 15 games. Despite the offseason turmoil and eventual change in ownership, Torres stayed in MLS and picked up where he left off. Torres scored in the first four games of the season and reeled off another scoring streak, notching a strike in six consecutive matches during the summer.

Torres is among the MLS leaders in goals and leads Chivas USA in matches played and minutes heading into this weekend’s action.

Unfortunately for Chivas USA fans, this sort of production from a young player mired in obscurity or stuck in a logjam with other players in the Chivas Guadalajara system came far too late to lead to anything. Torres was the kind of player Chivas USA officials talked about bringing to MLS in what was supposed to have been a win-win situation. Chivas Guadalajara gives youth a place to develop while Chivas USA gets a boost in the roster, in the stands and in the league table.

Combined with veteran Chivas Guadalajara talent, the base of Chivas USA was there. What if that actually would have happened?

The first attempt was wretched. The youth that Chivas Guadalajara wanted to develop in Chivas USA were second-division talent, not young players on the brink of real success. Only one player – Francisco Mendoza – stuck around for the following season. Another player – Isaac Romo – went on to have some success in Mexico, but other young players quickly flamed out after 2005.

When Preki took over as coach in 2007, he asked for one of those young players stuck in the system at the parent club. Jorge Vergara refused to send Javier “Chicharito” Hernandez to MLS for seasoning.

In fact, nothing came from Guadalajara. Not until 2009 when Jesus Padilla arrived did Guadalajara send any sort of youth. Padilla played in 11 games that season and went on to play 26 more the following season, but one player wasn’t nearly enough.

Chivas USA could have used some Torres-like talent in their glory years. Had a player or three of Torres’ caliber arrived in 2006, 2007 or 2008, the club could have built on their promises

Marco Fabian, Patricio Araujo, and Hernandez were among the young players in 2007 and 2008 who were with Chivas but saw little to no playing in Mexico. All have since gone on to have fine careers and continue to show promise for their clubs. Imagine what they might’ve done even over a short stay in Los Angeles?

Just their presence would have meant a great deal. It would have shown true commitment by Vergara and fellow ex-owner Antonio Cue instead of empty words and promises.

If Torres earns his first cap in either of next month’s friendlies, he will become the first player to gain a path to the Mexican National Team through his play with Chivas USA. At one time, that sort of statement would have led to pride and excitement for the future. Now, it will merely be another footnote in a sad history of a club that could have been, and absolutely deserved more.