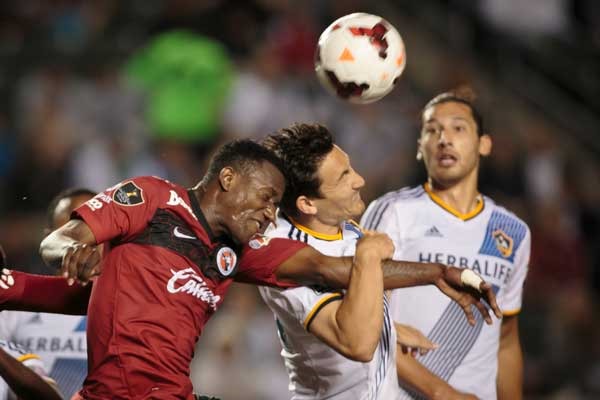 By J Hutcherson – WASHINGTON, DC (Aug 19, 2014) US Soccer Players – Ben Olsen is the latest MLS coach to figure out the CONCACAF Champions League. Faced with the same squad issues and fixture congestion as every other MLS coach, Olsen made things clear. For DC United, it’s making the MLS playoffs first and fielding a competitive team in the CONCACAF Champions League second.

“Our only focus is putting ourselves in the postseason,” Olsen said a few weeks ago. As always seems to happen the closer an MLS team gets to playing in the CONCACAF Champions League, Olsen toned down his comments following Sunday night’s game.

“We do want to move on and get through to next year, and it starts this Wednesday,” Olsen said “How many guys am I going to change? I’m going to change some, that’s for sure. Some guys are going to need to step up and find ways to win games.”

The result is obvious. Finishing 1st or 2nd in the Liga MX Apertura or Clausura means playing in CONCACAF rather than CONMEBOL. There’s nobody arguing that the CONCACAF Champions League is a stronger tournament than the Copa Libertadores. MLS is still waiting on their invite to send teams to what is the second strongest regional club competition in the world.

So why does Liga MX send anybody but their best teams to South America? Simple. CONCACAF doesn’t allow it. One of the things CONCACAF did in an attempt to reestablish their own regional club competition was to make it compulsory. Removing choice meant no longer worrying about the Liga MX champions opting for the Copa Libertadores. It also guaranteed the best CONCACAF clubs playing in CONCACAF’s Champions League.

Unfortunately for all involved, it hasn’t worked. Opting for weak rosters in the group stage is an annual event with the Champions League. Liga MX and MLS clubs try to do as little as they can to get by. Youth squads, reserves, players that haven’t featured in domestic league games. All can step into roles at what CONCACAF designed as the biggest club show in the region.

Instead, it’s something that teams feel obligated to manage. CONCACAF’s insistence on following the league model established by UEFA’s Champions League overlooked one small item. Guaranteed games in the group stage in Europe means guaranteed revenue at a level that no club can resist. In CONCACAF it’s not even close. All CONCACAF really did with the league model was guarantee games few teams want to play.

What if they didn’t have to? Rather than forcing participation as an obligation, make it a choice. How long would the CONCACAF Champions League last in its current format? The Liga MX champions would almost certainly choose the Copa Libertadores. If MLS teams had that option, so would they. To some extent, fair enough. The bigger problem for CONCACAF are the teams who would choose not to play outside their domestic league at all.

Every version of the CONCACAF Champions League shows us a few teams making that choice clear. They’re the ones who don’t field competitive teams and don’t charge admission for their home games. The ones who treat the tournament as the obligation CONCACAF created before maybe deigning to compete in the later rounds. That these teams can get that far is enough of an indictment of the CONCACAF Champions League as a whole.

Since we see it every fall, maybe it’s time for CONCACAF to take the next step. Let them see what happens if tournament participation isn’t obligatory. Yes, the CONCACAF Champions League is the only way into the FIFA Club World Cup, but that tournament suffers from the same problem. If Europe’s Champions League winner wasn’t required to compete, would they?

If the answer is ‘probably not’ than maybe it’s time to revisit the purpose of the tournament. Crowning the best in the region is an admirable goal, but we already know that meaningful competition isn’t a given. If, given the choice, the clubs would say no thanks, why isn’t that the answer?