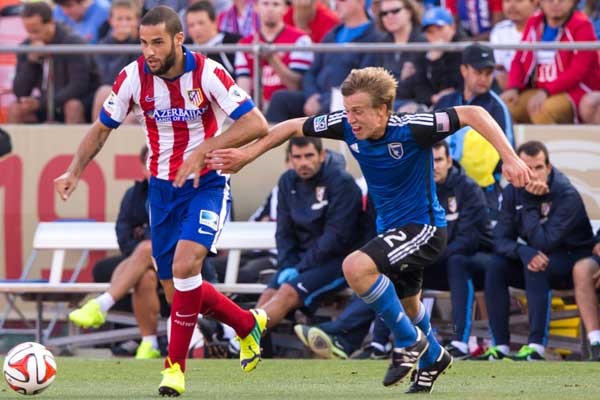 By Jason Davis – WASHINGTON, DC (Aug 29, 2014) US Soccer Players – Here’s a fun little exercise worth trying with ten or so games left in the 2014 MLS regular season. Pick a favorite player. Don’t just default to the big names, either. Pick someone audacious, someone exciting, someone who shows promise but hasn’t quite established themselves. Pick someone you can claim to have been tipping for stardom before they became stars, so when they become stars, you can take credit for identifying them.

As the MLS season winds down, a clutch of new players are making their presences felt in clubs up and down the table. For the bottom feeders, this is the moment to give the kids a chance after playing the veterans didn’t work. For the top teams, injuries and fatigue make playing new players a necessity, whether in secondary competitions or even in the crucible of MLS.

Meanwhile, MLS still has a collection of stars who are not just names on a marquee, but consistently deliver thrilling play week-in, week-out. Maybe it’s a cop-out to pick a Designated Player, or maybe it just makes sense.

How to go about picking a new favorite player for the stretch run? To each their own, but if there’s a name you’re going to shine your particular light on for the last few months of the year, he should be exciting, dynamic, and full of potential.

There’s plenty of room to love the heady defender who quietly goes about his job. How about the central midfielder who keeps things moving and throws in the occasional well-timed tackle? We all know attackers get most of the headlines. Attackers are naturally the best candidates for adopted favorite players.

A list of the potential contenders new on the scene almost has to begin with San Jose forward Tommy Thompson. Thompson’s abilities are evident whenever he steps on a field. The Earthquakes homegrown talent might already have one of the best first touches in all of MLS.

A couple of starts over the last month shows that the team is finally ready to give him a chance, after previously relegating the 19-year-old to the Quakes bench and loan stints in USLPRO. Teenage prospects have a dicey history in MLS. Will they adjust? Can they contribute? When it comes to Thompson, those questions become almost irrelevant after just a few minutes of watching him play.

Thompson is a skillful player who relies less on his physical gifts than on his intelligence and ability to control the ball. Watching Thompson play provides just a little spark of hope that what he brings to the table is unique enough not to be tackled out of him by the fast, rough play of MLS over time. Without heaping too much upon a teenager’s shoulders, Thompson is exciting because he’s a gifted soccer player, not just because he’s a gifted athlete.

If potential isn’t your thing, MLS has plenty of proven names who figure to make an impact on the remainder of the regular season, and—unlike Thompson—the playoffs as well.

During Clint Dempsey’s absence for World Cup duty, Seattle’s Obafemi Martins carried the Sounders. With Dempsey back in the lineup, the two are establishing a spirit of showmanship and mischief that’s fun to watch.

Martins’ jaw-dropping slalom through the Timbers defense on Sunday is reason enough to pick the Nigerian striker as a favorite with 10 games to go in the regular season. Martins’ game is full of speed, energy, creativity, and willingness to try anything. Every move that involves him has the potential to end with an amazing goal, or barring that, an amazing near miss.

The old saying goes that you don’t pick a team, a team picks you. While that’s a very romantic notion, it’s also rather restrictive. What’s an MLS neutral to do when no team emerges from the pack to make their case, in whatever way that’s supposed to happen? Better the freedom of picking a favorite player or two, a process that isn’t subject to an imaginary set of fan ethics, then wait around for something that may never happen. If the goal is to avoid picking a team for shallow, spurious reason, then latching onto a player is an alternative that demands none of the posturing. Identify excitement and go.

Whether it’s Thompson, Martins, or someone else, take the ride. It will make you a better soccer fan.