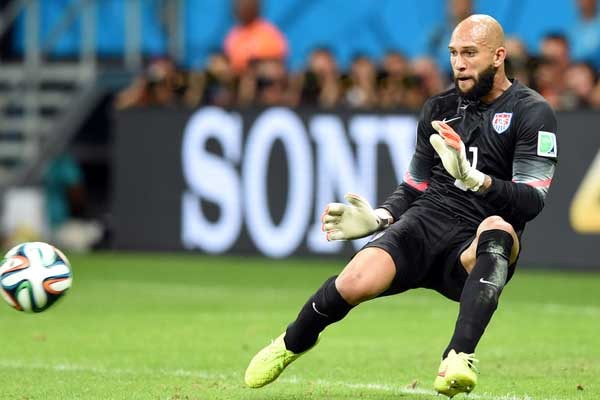 USMNT goalkeeper Tim Howard announced on Thursday that he is taking a break from the USMNT and won’t return until September 2015. Howard was one of the stars of the 2014 World Cup squad, producing a standout performance in the knockout round against Belgium.

“Having played overseas for the last 12 years and missing out on spending time with my family, making this commitment to my family is very important at this time,” Howard said in a statement announcing the decision. “I am grateful for the willingness of both Jurgen Klinsmann and Everton manager Roberto Martinez to afford me the opportunity to spend time with my kids. It’s the right decision at the right time. Jurgen has always been up front with all the players in saying you have to earn your place, which is something I agree with, so I look forward to coming back next fall and competing for a spot.”

“Physically and mentally I feel as strong as ever. I’m also 35 years old and it’s four years before the next World Cup. If I want to be able to get to the next World Cup, I also have to be smart about managing my body. I will get a bit of extra time off during the international windows, and this will also be the first real summer break that I have had in 12 years.”

USMNT coach Jurgen Klinsmann made it clear that when Howard returns to the team he will need to reestablish himself as the USMNT #1 goalkeeper.

“We had a very good and productive conversation,” Klinsmann said. “I totally understand Tim’s situation. He was very straight forward and honest in his approach, and I admire him for that. He has a wish to take a step back to take care of his family, and we came to the conclusion that it’s absolutely fine that he takes time off from international soccer until after next summer’s Gold Cup, and then we reevaluate. I told him as long as he is the same Tim Howard that we always see performing well, he will be welcome back.”

Howard replied with “absolutely not” when asked if he had a guarantee that he will once again be the #1 USMNT goalkeeper when he returns.

“Jurgen has always been upfront with all the players in saying you have to earn your place, which is something I agree with. Every player makes their own choices for their own reasons. In my case, this is a decision for my family. For me, it’s important that my teammates and my coaches have a clear understanding of where I’m coming from. I hope by now they know what I am about. I’ve had honest conversations with Jurgen and Roberto Martinez, and I appreciate their understanding. It doesn’t change the fact that I have to earn my spot, and I look forward to doing that.”