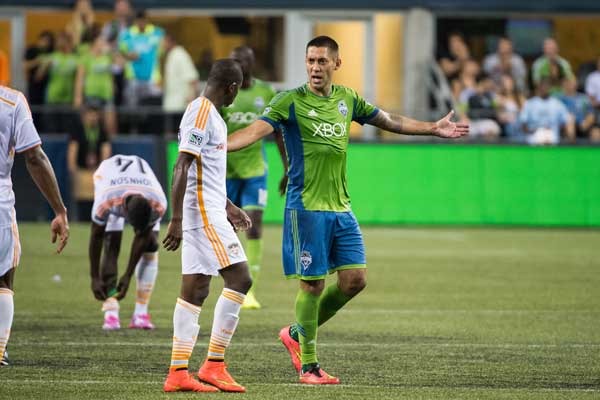 By Jason Davis – WASHINGTON, DC (Aug 13, 2014) US Soccer Players – First, let’s be fair. MLS has a lot going for it. New stadiums, good crowds, the promise of a prompt paycheck, the chance to live in countries with some of the highest standards of living on the planet. All of those things make the North American League enticing to foreign players, particularly those who originate in the rest of the Americas.

Take the Seattle Sounders, for example. Seattle is a vibrant soccer market with the biggest crowds in MLS by a factor of two. It’s a significant pull for players pondering making the jump to the United States. Whether American (Clint Dempsey) or not (Obafemi Martins), players notice that they won’t be taking a step back playing in Seattle. This isn’t a suburban stadium hoping to draw 15k while announcing 20k.

Then again, there was Seattle at home on Sunday night. For anybody that missed the game, the field was the problem. Seattle vs Houston played out on national cable on a field strewn with a strange circular arrangement of the rubber pellets used to provide give to artificial surfaces.

As if the issue of artificial turf itself wasn’t already a talking point in soccer circles. Whatever your opinion on the fake stuff might be, there is a clear negative perception among those who it affects most: the players. Seattle compounded the issue with a playing surface that looked like something out of a motocross rally gone horribly wrong.

The explanation for the ugly turf at CenturyLink Field lies in the shorter than usual prep time given to the stadium crew ahead of the match. An Amazon.com company picnic took place at the stadium the day before, leaving the staff with fewer hours to do the usual maintenance on the field. That, combined with warm temperatures according the Sounders, made the field look as though it was covered in more rubber pellets than is typical. The Sounders claimed that was not the case.

Regardless of the reasons, the eyesore presented on ESPN2 on Sunday night is a stark reminder that no matter how much MLS has working to its advantage, the reality of occupying fringe space on the American sports scene creates regular problems of perception. MLS is constantly fighting to prove it’s not a low-rent operation. Whether it’s field turf, inadequate facilities, occasionally empty stadiums, public spats over contract terms, or any of a number of other small, but potentially damaging, bad moments.

If nothing else, the Sounders’ visible issues with rubber make clear their second-class status in a stadium built with soccer in mind, but with football front and center. Now what was simply an ugly field with some playability problems becomes commentary on MLS as a whole.

Admittedly, it’s easy to carry this line of thinking too far. Some things that appear embarrassing for MLS don’t matter to everyone. American soccer fans are highly tuned to any frequency that paints MLS or the game here in a negative light. Anything under the control of the league or its teams should help, not hurt. The visual of Seattle’s bad turf on a national broadcast is particularly painful in that light.

MLS can’t afford to get the easy things wrong. Whether Seattle’s field on Sunday night falls into that category is a matter of one’s patience for the excuses outlined above.

When you’re not the best, it behooves you to strive even harder to give the impression that you’re a top class operation. That’s how you attract better people and more attention. In other words, “Fake it until you make it.”

MLS should be past that adage. In many ways, it is. There’s no need to fake anything in many places where the sport has taken root and clubs are succeeding. Sporting isn’t faking anything. Neither is RSL, or Toronto. New, purpose-built stadiums make the running of a professional soccer club in the United States less of a struggle, less smoke and mirrors. As MLS matures, simply being big time replaces the need to act big time.

No one seems more big time than the Seattle Sounders, with their massive crowds and apparent prominence in their home market. Seattle is the leading light of a competition transitioning from an era when the words “Major League” in “Major League Soccer” seemed more like a goal that a reality. The Sounders are, without a doubt, “major league”.

That’s why Seattle, of all places, presenting less than a first-class product on a nationally available game is a problem. It’s not a step back in the big picture sense. It’s just an unnecessary reminder that MLS still has considerable work to do even in a market where they’ve made it.