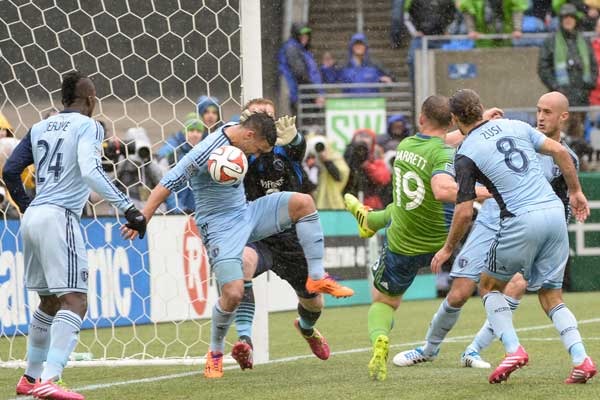 By Jason Davis – WASHINGTON, DC (Aug 1, 2014) US Soccer Players – As August begins, the playoff picture in MLS remains murky. As is so often the case, a host of clubs are separated by just a few points up and down the standings. The battle for the last few spots is already intense, turning on just a few games.

At the top of each conference, a separation is underway. A pair of teams are staking their respective claims to top honors. While it’s ultimately wins and points that matter, the perception of the top contenders builds as much on the manner of their success as on points.

In the Eastern Conference, Sporting Kansas City is in a dogfight for first place with a surprising D.C. United team. Nonetheless, it’s Sporting Kansas City that has the appearance of a possible MLS Cup winner. Peter Vermes’ team is the defending champion, a title that brings with it a sense of belief like no other team in MLS.

The emergence of Dom Dwyer as a lead scoring threat is a starting point. Then there’s the stellar two-way play of Benny Feilhaber. Add in the strength of a backline that boasts two top central defenders and it’s more than enough to think that Sporting could make it two titles in a row.

Out West, the Seattle Sounders are building a case that they’re the odds-on favorite to lift the Philip F. Anschutz Trophy come December. The Sounders multi-faceted attack is the envy of MLS. Both Clint Dempsey and Obafemi Martins possessing MVP-level numbers 19 games into the campaign. Chad Marshall’s arrival shored up the defense. The Sounders’ central midfield duo of Gonzalo Pineda and Osvaldo Alonso has the type of bite needed to win in a league still noted for physical play in the area between the boxes.

Both teams have significant home field advantages. If they can leverage them, it bodes well for the crucible of playoff soccer.

So which club should be the number one contender?

The relative strengths of the two teams is just one consideration towards making a very tough decision. On paper, Seattle boasts more high-caliber talent than their Eastern Conference rivals, outspending Sporting Kansas City by a healthy margin. It’s more than just Dempsey and Martins, though those two goal scorers will grab the marquee.

Seattle can roll out a midfield featuring Pineda and Alonso, plus Marco Pappa, Lamar Neagle, and USMNT player Brad Evans. Marshall directs the defense, with World Cup star DeAndre Yedlin flying up and down the flank, working both sides of the ball.

On the bench are names like Kenny Cooper and Chad Barrett, above-average MLS attackers to whom Sigi Schmid can turn to change a game. Stefan Frei is good in goal.

Sporting is currently suffering an injury crisis at fullback, but is capable enough in other areas to cover for some of the resulting issues.

Coaches, too, play a role in evaluating the two teams. Vermes’ program brought a title to Kansas City last season, but Schmid is an all-time MLS great at the coaching level with two MLS Cups of his own. The leadership spot is a wash, though Vermes should get a bit of extra credit for his more recent success.

Seattle’s road to the top of the contender rankings is more difficult because of the higher quality of teams in the Western Conference. The Sounders raced out to a significant lead in the West despite the top half of the conference supplying a preponderance of the League’s upper echelon. While Sporting is fighting off a resurgent D.C. United team made up of MLS veterans, Seattle is battling teams like LA and RSL. Cross-conference play impacts the calculus of judging conference strength exactly, but there’s no denying that the West is home to more established, successful teams.

Regular season success only occasionally informs playoff success in MLS. Form at the tail end of the season. When games serve the dual purpose of sorting out the final standings and preparing teams for knockout soccer, late season form is more telling than a great first half or a lengthy July winning streak. Ask the New York Red Bulls how much winning the points title matters when an MLS Cup is on the line.

This is MLS, where the schedule always seems to work against providing the games we want to see. That’s the case with our two contenders. If we’re considering the head-to-head record between the two teams, we have just one game to go on: the season opener on March 8, a game the Sounders won 1-0 in Seattle.

When most things are equal, it’s best to go with the proven commodity. Sporting might have a slightly different team than their 2013 MLS Cup-winning squad, but that triumph means a lot when comparing the two top contenders at the midway point of the 2014 season.

The Seattle Sounders are probably the best team in MLS. Sporting Kansas City, however, has a trump card. We’ll see if it matters in a little over three months’ time.