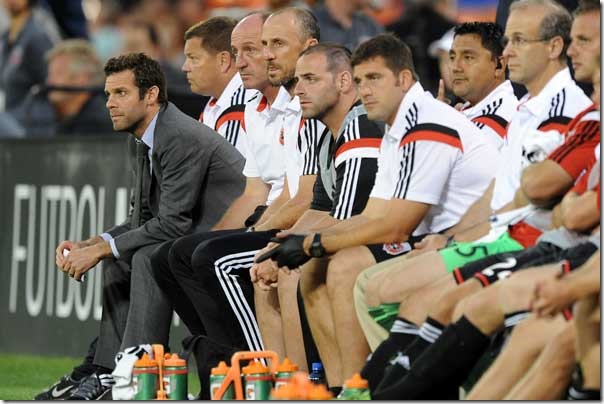 By Clemente Lisi – New York, NY (Aug 4, 2014) US Soccer Players – When the Montreal Impact hosts El Salvador’s CD Fas on Tuesday night at Stade Saputo, it won’t be a meaningless friendly between an MLS team and a touring club. Instead, it will be the start of the 2014-15 CONCACAF Champions League, adding more meaningful games to what has become an ever-crowded summer of meaningless ones.

Sure, the game won’t attract the same attention as this past Saturday’s Manchester United-Real Madrid friendly in Ann Arbor, Michigan – a match reminiscent of that other Champions League – where a US-record crowd of 109,318 showed up. The CONCACAF Champions League is more important to American soccer. How MLS teams will cope with the additional games – air travel compounded with the higher level of competition as the tournament progresses — remains to be seen. In the summer/fall, it’s too many games for MLS teams. In the winter/spring, just too few.

Domestic success has not always meant winning abroad for MLS teams. That’s not a knock against Major League Soccer. It’s a fact that even when teams pile up wins in MLS, they don’t go far in what is the region’s top club competition. Since 2009, a Mexican club has always won the tournament. In all but one case, the final was all-Mexican, with the 2010-11 title game the only exception when Real Salt Lake lost to Monterrey. It seems that the Mexican Apertura/Clausura schedule better prepares clubs for the CCL than MLS’s March-December season.

Will this tournament be different? Will Montreal, Sporting Kansas City, NY Red Bulls, Portland Timbers and DC United be able to compete? Do they have the roster depth to deal with the congested schedule? And how will they do once the tournament spills into next year during what is typically the MLS offseason?

Sporting KC, on a high after winning MLS Cup last December, was unable to get past the quarterfinals, losing to eventual-champion Cruz Azul 5-2 on aggregate. A berth to the semifinals seemed a real possibility after winning 1-0 at Sporting Park. A 5-1 road loss, however, spelled the end. Again, the outcome (Cruz Azul’s sixth continental title) highlighted the often stark differences between Liga MX and MLS. After all, the winner goes to represent CONCACAF at the annual FIFA Club World Cup, a place MLS would love to get the exposure.

For all the MLS teams in the CCL (minus Montreal who is not making the playoffs at this point), it’s all about the schedule, roster depth and making the MLS playoffs. After all, any likely Mexican opponents won’t come until the knockout round.

First, Sporting KC, New York, Portland and DC United have to juggle a hectic three months. Here’s what to expect:

Following a successful World Cup for Graham Zusi and Matt Besler, Sporting KC signed both to DP contracts, ensuring they’d keep the talented duo. This month, the team will play three games in eight days – two MLS matches (versus Toronto FC and DC United) – with a road trip to Nicaragua to play Real Esteli. In September, it has two CCL games over a span of five days – both at home against Costa Rican side Saprissa and Real Esteli. With the team expected to wrap up a MLS playoff berth, the October 23 road match against Saprissa will decide whether Sporting KC advances to the knockout round.

New York has not had much success in MLS. For the Red Bulls, this is the first time it will play in the Champions League by virtue of winning last season’s Supporters Shield. For Thierry Henry, a veteran of the UEFA Champions League, it will be interesting to see him take on the best teams on this side of the Atlantic. New York’s season – both in MLS and CCL – will be make-or-break next month. Although it caught a break (as far as travel is concerned) when it drew Montreal in its group, the Red Bulls have a loaded September. Seven games in 22 days starting September 13 with road games at Los Angeles and El Salvador versus FAS.

CONCACAF clubs (specifically, Guyana’s Alpha United and Honduran side CD Olimpia) will get to experience one of the greatest crowds in North American soccer. Portland got into the CCL by virtue of winning the Western Conference (after MLS changed its rule to allow the conference winner that did not win the Supporters Shield, not the MLS Cup runner-up, to participate). If any team has a 12th man advantage in the CCL, it’s Portland. Most interesting will be its opener against Alpha United on August 19, followed by two intense MLS games versus rivals Seattle on August 24 (at home) and a week later against Vancouver (on the road).

The team is back in the CCL and it will certainly test its depth. Although not as talented as Sporting KC, DC United head coach Ben Olsen has said the team is “going to rely on guys in the next month or two that haven’t seen a lot of minutes.” Should be interesting to see who those players are, but the recent signing of center back Kofi Opare should certainly help. The team’s toughest month is August, where it has a seven-game stretch over 29 days. Its CCL opponents are not too difficult (Jamaica’s Waterhouse FC and Panama’s Tauro appear manageable), but its three MLS games are not: away against Sporting KC and Los Angeles and a home clash against rivals New York on August 31.