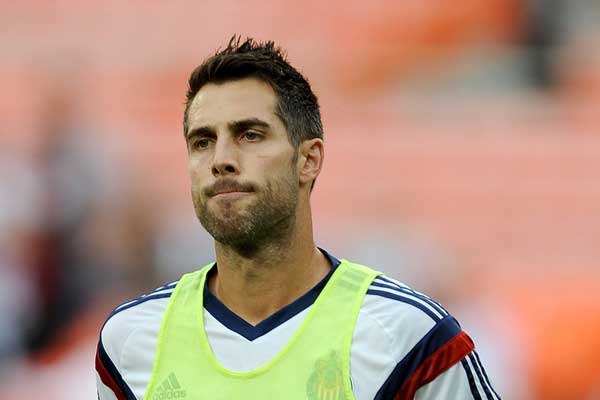 Former USMNT captain Carlos Bocanegra announced via Twitter on Thursday that this season would be his last in professional soccer. Bocanegra has missed time this season after suffering a concussion with Chivas USA.

I will be retiring at the conclusion of the 2014 MLS season.

“I’m still hungry for the game and I want to play, but unfortunately you can’t play forever,” Bocanegra said in a press statement. “I was thinking about this in the offseason, and it took me about six months to come to a final decision,” said Bocanegra. “The timing is right for me. I’ve known for a little while now in my mind and in my heart. I’m happy with it, and I’m looking forward to the new challenges.”

Bocanegra returned to MLS as a member of Chivas USA in 2013. He spent several seasons in Europe, first as a member of Fulham and later with Rennes, St Etienne, Rangers, and Racing Santander. Bocanegra was the MLS Rookie of the Year as a member of the Chicago Fire in 2000. With the USMNT, Bocanegra emerged as a centerback capable of stabilizing a defense under pressure. He was part of the 2002 and 2007 Gold Cup winning squads and the team that finished runners-up at the 2009 Confederations Cup.

In all, he has 110 appearances with the USMNT since his first cap against South Korea on Dece 9, 2001. He played in the 2006 and 2010 World Cups. He captained the USMNT during the 2010 World Cup. Bocanegra scored 14 goals with the USMNT. His last goal came against Guatemala in World Cup Qualifying on Oct 16, 2012.

After spending two seasons with Racing Santander in Spain on loan from Scottish club Rangers, Carlos Bocanegra signed with Chivas USA midway through the 2013 season. With MLS taking over the club for the 2014 season and planning an off-season rebranding before the 2015 season, Bocanegra was a stable part of an unstable situation. A product of Southern California youth soccer, Bocanegra won the NCAA championship his Freshman season at UCLA.