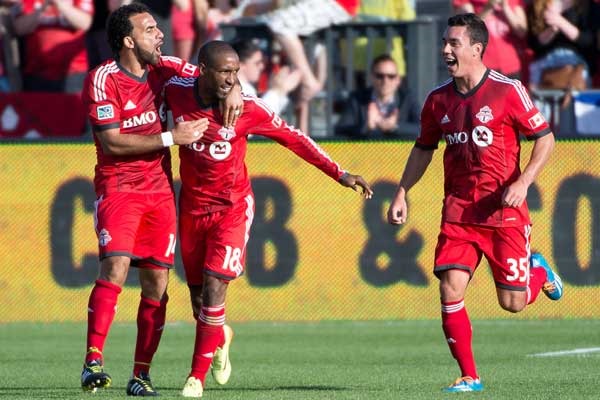 By Jason Davis – WASHINGTON, DC (Sep 3, 2014) US Soccer Players – Toronto FC may very well make the MLS playoffs for the first time this season. If they do, it won’t be because the organization is a well-run machine, cranking out wins as a byproduct of smart thinking and competent stewardship. If Toronto FC makes the MLS playoffs, it will almost certainly be because of two things. A higher and more expensive level of talent good enough to get by and the relative mediocrity of the Eastern Conference.

This is worth saying in light of yet another round of Toronto FC drama. The club fired head coach Ryan Nelsen with 10 games remaining in the regular season. That ran parallel with rumors that designated player Jermaine Defoe would leave Toronto FC for a quick return to the Premier League.

Even when Toronto is good, at least in comparison to past Toronto teams, the club can’t avoid tumult of some type.

The job of shepherding TFC through the last ten matches, and hopefully into the postseason, falls to former MLS player Greg Vanney. Vanney’s first task is to calm the team down. He’s hardly an outsider, serving as assistant GM and academy director. Vanney was there as Nelsen’s relationship with GM Tim Bezbatchenko deteriorated.

Vanney takes charge of a team that needs stability to make it to the playoffs. The Defoe situation is easier to handle than it might seem for one simple reason. Defoe isn’t physically there. Rehabbing an injury in England, Defoe will return to the team at some point after the intensity of the situation has peaked.

What Defoe will find is a stadium under reconstruction to expand seats. With that comes the expectation that fans will be there to fill them. That requires a playoff spot in 2014 to create the best case scenario.

Unlike the MLS poor in smaller markets, Toronto drives discussion because the team has so much working for it. Their failure is notable because there is less excuse for it. With an added bit of “otherness” (their Canadian provenance) thrown in, some MLS fans find schadenfreude in their constant missteps.

At the very least, TFC provides something MLS doesn’t get often enough. That’s the intriguing stories that fill the space between what happens on the field. In a league that turns over head coaches at a rate just a fraction of that of many others, doesn’t merit the type of 24-hour coverage that the traditional big sports league receive, and can’t count on manufactured controversy for interest, every appearance in headlines is a net positive.

Toronto FC, almost all by themselves, provides the MLS news cycle with tabloid-like fodder. Very little of it filters outside of the current MLS bubble, but that doesn’t matter. That’s right, Toronto’s floundering is, in and of itself, valuable to MLS.

Is it more valuable than a truly successful team in Canada’s largest city? Probably not. However, the answer to that question might depend on how much MLs values the big picture over individual markets. A winning Toronto would do wonders for MLS in Canada. It might even bring soccer to a place in line with the other pro sports that aren’t hockey.

Toronto FC’s ownership have other pro teams to occupy their time if their soccer club isn’t winning. The Reds compete in their own corporate structure against the NBA’s Raptors and one of the biggest teams in Canada, the Toronto Maple Leafs. Winning in Toronto would certainly make the club more important in the owner’s portfolio. Of course, it is MLSE’s own questionable competence that makes the soccer club secondary to its other holdings.

Every sports league has clubs that possess great resources but consistently underachieve in spite of them. MLS is no exception. What often mark those underachievers are long periods of failure, such that it becomes the overriding characteristic of the team. Failure begets failure, creating a vicious cycle that is inescapable short of a profound change in approach or a large bit of luck.

Toronto tried to change their lot. First was the hiring of Tim Leiweke, someone who knows how to build in MLS. Then they signed Defoe and Michael Bradley doubling down on what Seattle did with their designated player spots.

Just a few months on from the good feelings of the acquisitions and the dawn of a new era for TFC, the project is falling apart. Leiweke announced he will soon be leaving MLSE. The team has struggled for consistency on the field. Now Nelsen and Bezbatchenko have sniped at each other in an ugly, public manner, with Nelsen paying for that with his job.

All that does is circle back to eight seasons without making the playoffs. So much money and effort and Toronto FC can’t cross the surprisingly low hurdle of ‘MLS playoff spot’. If Toronto does make the playoffs, they may start to shake their “underachievers” label. Perhaps that will help them also shake their preponderance for creating headlines from their unfortunate inability to avoid drama and intrigue.

Then again, if Toronto FC isn’t going to win games and contend for titles, the least the club can do is provide fodder for discussion in between the games. There’s value in that, even if it’s not the kind Reds fans want in return for their support.