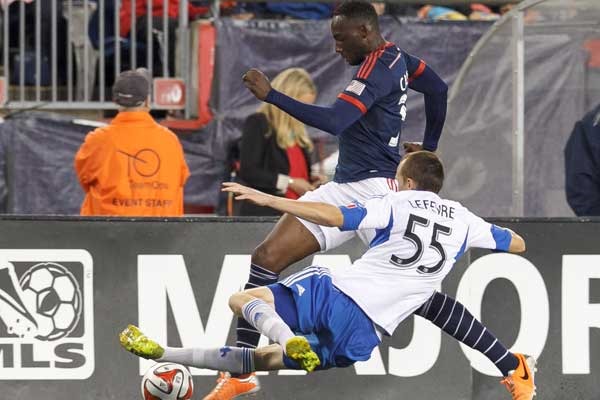 If there’s a team to rebound against in MLS, it’s probably going to be Chivas USA. With Sporting Kansas City struggling, they had to have liked the next game on the schedule even if it meant travelling to StubHub Center. The 4-0 result for Sporting Kansas City is what they needed.

Dominic Dwyer started the goals for Sporting Kansas City in the 40th minute. Benny Feilhaber doubled the lead in first-half stoppage time. Graham Zusi scored in the 52nd and Claudio Bieler finished off the goals in the 87th minute. Dan Kennedy needed two saves for the shutout.

For Chivas USA, it’s another loss in a season full of them. Chivas USA lead the Western Conference with 16 losses in 2014, but it’s Montreal with the most at 17. Montreal gave up a lead and lost to the New England Revolution 2-1 at Gillette Stadium. Calum Mallace opened the scoring for Montreal in the 13th with Kelyn Rowe equalizing in the 23rd. Charlie Davies and Jermaine Jones assisted on Lee Nguyen’s winner two minutes later.

Seattle beat Real Salt Lake 3-2 in a meeting of Western Conference heavyweights at CenturyLink Field. Javier Morales put Real Salt Lake up on the road in the 30th minute. Lamar Neagle equalized for Seattle in the 38th and Obafemi Martins put thm up a goal in the 43rd. Joao Plata equalized for Real Salt Lake in the 50th. RSL went down a man with Nat Borchers shown red in the 68th minute. Playing with the advantage, Seattle found their winner with an Andy Rose goal four minutes into stoppage time.

“Obviously that changed the game,” Real Salt Lake coach Jeff Cassar said. “We had to make a few tactical moves and for the most part it worked extremely well. We tried to get pressure to the service but you can’t get to everyone. Credit to Seattle for pushing for it but if it’s eleven players on the field for us it’s a different story.”

FC Dallas beat Vancouver 2-1 at Toyota Stadium. Coming off of a run with Panama in the Copa Centroamericana, Blas Perez scored both Dallas goals.

“Yes, I was a little tired, but I recovered quickly,” Perez said. “I told Oscar that I was ready to play. He asked me if I could pla y at 100 percent, and I told him that I felt I could. I am glad everything went the way that we planned… I’m just happy. Tomorrow we’ll be back training again, a recovery practice but yes it will be a normal week of training… I’ll take Monday off.”

The rest of week 27 was MLS teams splitting points in both conferences. Philadelphia and New York finished 2-2 at PPL Park. New York took a two-goal lead on the road with a Peguy Luyindula penalty in the 37th minute and Thierry Henry scoring in the 40th. Pedro Ribeiro scored for Philadelphia a minute later and Sebastien Le Toux equalized in stoppage time.

In Houston, the Dynamo and Columbus Crew also finished 2-2. This time, it was the home side giving up a two-goal lead. Houston benefitted from a 12th minute own goal and Giles Barnes scored in the 38th. Will Trapp pulled a goal back for Columbus in the 48th minute and Ethan Finlay scored in the 54th.

2-2 again, this time between the Colorado Rapids and Portland Timbers at Dick’s Sporting Goods Park. Diego Valeri put Portland up a goal in the 43rd. Dillon Powers equalized for Colorado from the penalty spot in the 48th minute and assisted on Deshorn Brown’s goal in the 66th. Gaston Fernandez equalized for Portland in the 76th minute.

Chicago and Toronto ended 1-1 at Toyota Park. Lovel Palmer scored for Chicago in the 11th and Dwayne De Rosario equalized for Toronto in the 89th. Chicago had a penalty saved in the 57th minute. Toronto had what they thought was a stoppage time winner called back by the referee for a foul.

Same score for San Jose and the Galaxy, finishing 1-1 at Buck Shaw Stadium. Omar Gonzalez scored for the Galaxy in the 28th with Chris Wondolowski equalizing in the 66th. Robbie Keane hit the crossbar with his 37th minute penalty attempt. The referee kept himself busy, showing nine yellow cards with five of those to San Jose.

“It might sound like a broken record, but when we do the little things and connect passes, we’re a good team and can play with anyone,” Wondolowski said. “But, when we don’t do that – we don’t track back, win our 50-50 battles or connect passes – we can get ourselves in some serious trouble.”