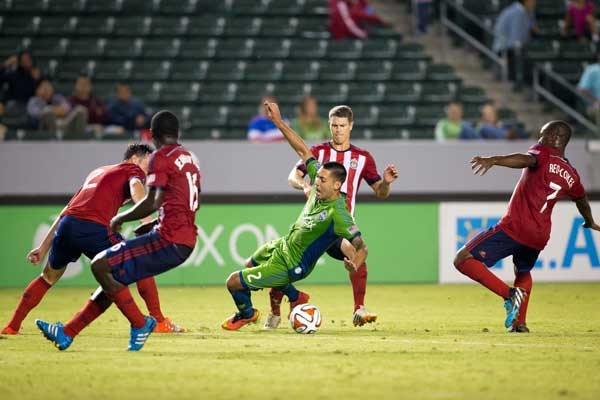 ESPN.com reported on Monday that MLS will place Chivas USA on hiatus for two seasons. The news confirms rumors about the club’s future. Initially, MLS announced that the club would undergo a rebranding in the offseason, playing in 2015 under a new identity but remaining in the Los Angeles area. Now, MLS seems to have a different plan.

According to ESPN’s Jeff Carlisle, Chivas USA is either already sold or in the process of being sold and will not play until the 2017 season at the earliest. Upon reemerging, the Los Angeles based MLS team will have a new identity and a new stadium. Chivas USA is currently under the operation of MLS with former MLS vice-president Nelson Rodriquez running the club.

In a statement to ESPN, MLS commissioner Don Garber was noncommittal. “Once we have confirmed a new ownership group, we will discuss the future of the club with the MLS Board of Governors, including whether or not we are going to operate the team in 2015 and beyond.”

What that means for the fans of Chivas USA is another twist in a confusing season. After MLS took over the club from investor/operator Jorge Vergara, continuing to use the Chivas USA branding was a nonstarter. Vergara owns the Liga MX club Chivas. With a new name and branding expected for 2015, Chivas USA continued to struggle in 2014 under MLS management. The club does not have a stadium lease for StubHub Center in 2015 and is the worst drawing club in MLS.

Rumors linking potential ownership groups and a stadium somewhere else in the LA area quickly turned to hiatus. Brian Straus at SI.com reported a few weeks ago that hiatus was an option MLS might be weighing. The length of hiatus is now the issue, with MLS never fully addressing the original report and leaving questions with their public comments to ESPN.

Assuming Chivas USA does go on hiatus for two seasons, they would return to a league that has added three expansion clubs. NYCFC and Orlando start play in 2015 with Atlanta joining for the 2017 season. MLS has never put a team on hiatus, though it was rumored to be an option when the Chicago Fire found themselves without a place to play following the 2001 season. MLS contracted two clubs that off season. When the San Jose Earthquakes relocated to Houston, the name, logo, and record of that club stayed in the San Jose market for a future expansion.