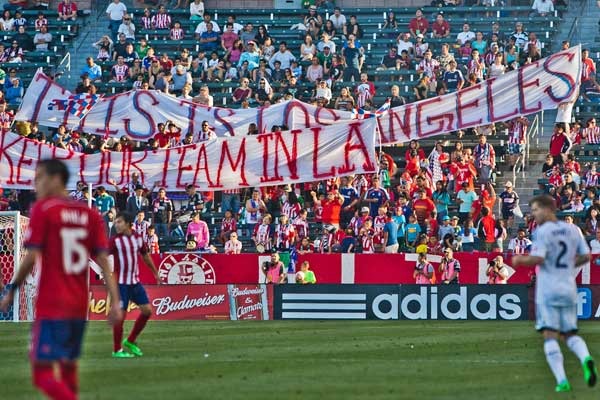 By J Hutcherson – WASHINGTON, DC (Sep 30, 2014) US Soccer Players – The easy answer is whatever MLS can get for the club. Chivas USA is certainly worth more as a placeholder than it is as an identity it can’t keep. Regardless of whether or not the hiatus rumor proves true, Chivas USA has no choice but to change. That’s as true as when MLS announced the league would takeover running the club in February as it is now with only a handful of games remaining on the 2014 schedule.

Chivas USA as a concept is done. What comes next should look an awful lot like an MLS expansion team. MLS hasn’t made very much of that, considering they have two true expansion teams starting play next season. MLS is very good at moving on, focusing on the upside, and pushing the product toward whatever comes next. That’s a second team in the second largest market, this time without the connection to another club in another country’s league.

That alone is a very good reason to shut the door on Chivas USA. There’s a way of looking at the entire Chivas USA story as a very NASL move for a league that worked very hard to separate itself from the earlier league. Except, and certainly unlike the NASL, MLS never cut its losses. As long as there was an investor/operator in place, Chivas USA could struggle as the second team and second tenant in a market they never really established.

It’s easy to feel bad for fans of any club going away. It’s not as easy to feel much for the club itself. That was one of Chivas USA’s obstacles. Creating an identity wasn’t the problem. That was easy, taking the name, the colors, and everything else they could to connect them to the parent club in Guadalajara. Except MLS teams aren’t supposed to have parent clubs. They’re supposed to be their own thing. Subsidiaries of the league sure, that’s part of the joy of single-entity, but not outposts for other brands of club soccer.

So Chivas USA had an identity, and it created a major problem. There are more non-Chivas soccer fans in the LA market than Chivas fans. Changing their Mexican club allegiance as part of embracing Chivas USA was never likely. In retrospect, it’s almost laughable. MLS badly misjudged the LA market in a way that seemed naive then and now just seems silly. Hey, it was early in the second expansion era and mistakes were bound to happen.

It didn’t help that Chivas USA shared a stadium with the LA Galaxy. Whatever space there is for an LA soccer club, the Galaxy tend to hog it.

The problem for Chivas USA was that there identity didn’t work at home and it didn’t travel. Chivas USA wasn’t a road draw at the same time when the Galaxy might’ve been the only road draw in MLS. Yet there also wasn’t an “us against them” identity for Chivas USA to use. This was Chivas, after all, a subsidiary of one of the biggest club soccer brands in North America. Whatever space the Galaxy left for a second club, Chivas USA couldn’t fill almost by design.

So, there they were, Chivas USA representing some version of Mexican club soccer until they didn’t. Then holding onto a name and identity that had nothing to do with the team on the field. Then back to that original difference between Chivas USA and the rest of MLS that did very little to attract fans. Finally, Chivas USA ends up a league owned team in an era where MLS was long out of the business of running its own clubs.

What Chivas USA means for MLS is a better chance in a market they value. We know that because they haven’t talked about moving the team out of LA. Right now or two years from now, that might not just be the easier choice, it might be the best one.