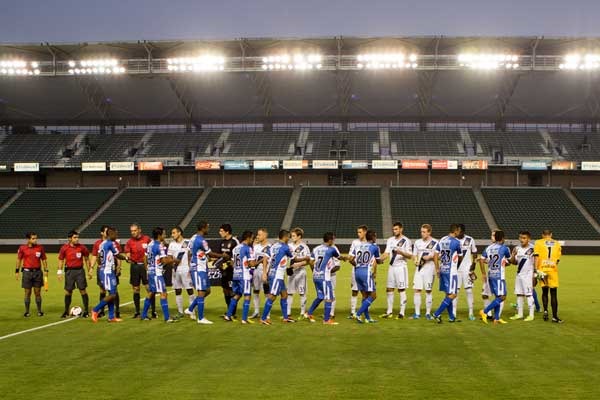 By J Hutcherson – WASHINGTON, DC (Sep 25, 2014) US Soccer Players – The CONCACAF Champions League might’ve reached a milestone on Wednesday night. The 2013 Liga MX Apertura and 2014 Clausura champions Leon lost to Herediano and can no longer advance to the knockout round with a game left to play in Group 7.

This isn’t the first time a Liga MX champion failed to qualify. In the 2013-14 CONCACAF Champions League, the 2013 Clausura champion Club America failed to advance from Group 4. Just like Leon, Club America lost to a Costa Rican club. The difference is that Leon is the only Liga MX team in the history of the CONCACAF Champions League to enter the tournament as both the Apertura and Clausura champions. Unlike Club America, Leon also didn’t exit to the Costa Rican champion.

Herediano qualified for the 2014-15 CONCACAF Champions League as the 2013 Invierno runners-up. The three-teams per group setup with only the group winner advancing CONCACAF introduced for the 2012-13 tournament significantly raises the stakes in theory. In practice, Liga MX clubs still have an easy time in the group stage. Since the introduction of the three-team groups, three of the four Liga MX teams advanced. In the 2014-15 CONCACAF Champions League, the Liga MX champion Leon is already out and Alajuelense is ahead of Cruz Azul in Group 6 with a game in hand.

2014-15 might be Costa Rica’s moment against Liga MX in the group stage, but they’re not the only league emerging as contenders. From MLS, DC United and the Montreal Impact have already qualified for the knockout round. MLS champions Sporting Kansas City has a three-point lead over Costa Rica 2014 Verano champions Saprissa with a head-to-head finale on the final match day. The Portland Timbers lead Group 5 by three-points heading into their final game against 2nd-place Olimpia.

Because Canada qualifies separately from the United States, Montreal ended up in the same group as the New York Red Bulls. That stopped a potential five-for-five sweep from the MLS teams. Even so, there’s a good chance MLS takes four out of the eight places in the knockout round. That would be the most for MLS in the history of the CONCACAF Champions League. With Leon already out and the potential for this to be the year when only two Liga MX clubs advance, this could be the season for MLS.

Unlike the last time MLS contended for the CONCACAF Champions League title, this doesn’t require stacking the championship round so the four Liga MX teams that normally advance knock each other out. That’s what produced the only CONCACAF Champions League final that didn’t feature two Liga MX teams back in 2010-11. It was only a little bit fairer in 2011-12, when one Liga MX club ended up on the other side of the bracket. Of course, Santos Laguna advanced all the way to another Liga MX vs Liga MX final. The same thing happened last season with Toluca knocking out the San Jose Earthquakes and Alajuelense on the way to playing Cruz Azul for the trophy.

If 2014-15 ends up another Liga MX final, it will be easy to forget the group stage and Leon disappointing. Liga MX has dominated the CONCACAF Champions League in a way that throws the entire tournament into question. If the point of a Champions League is not only to show the best team in the region but also the best league, Liga MX has made that point seven times in a row.

For CONCACAF, the level of competition is the problem. If everyone involved took the Champions League seriously enough to play their first teams, in theory the tournament should improve. In practice, it could end up with just a different level of Liga MX dominance. Given the demands of the club schedules and the travel involved for the Champions League, CONCACAF probably doesn’t need to worry. However, the lack of overall competitiveness is part of the reason why so few fans across CONCACAF seem to care about the Champions League.

Right now, the Champions League is a secondary Liga MX trophy that happens to involve other CONCACAF teams. The result is a foregone conclusion. Liga MX will win, represent CONCACAF at the Club World Cup each December, and fail to advance to the semifinal stage. CONCACAF needs one of two things. Another league to push Liga MX in the Champions League and potentially take the trophy, or Liga MX using the Champions League how CONCACAF intended as the highest level of club competition in the region.

Either of those outcomes would help a struggling tournament. Better still, a more competitive Champions League might create more competition at the highest level of CONCACAF club soccer. It would be good for the region to see a CONCACAF team not embarrass itself at Club World Cup level.