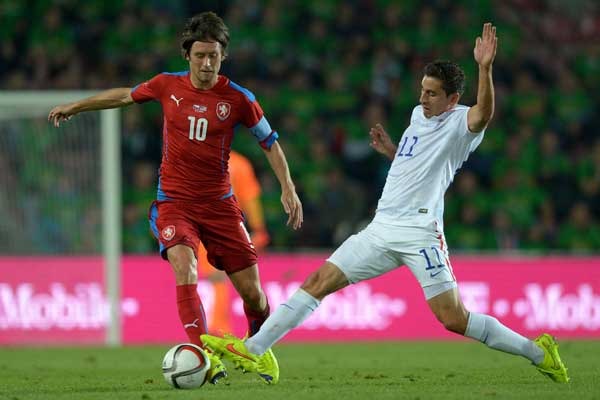 By Jason Davis – WASHINGTON, DC (Sep 10, 2014) US Soccer Players – It might not be fair to call the start of the new World Cup cycle for the USMNT “leisurely”, but it wouldn’t be entirely inaccurate either. Head coach Jurgen Klinsmann named a number of young and inexperienced players to his first post-World Cup roster. Klinsmann also called in players that are not yet at the level to play games that count. The USMNT that beat the Czech Republic in Prague last week was about as far as a full “A” team as any side Klinsmann will ever call up.

The word to describe that roster is “experimental”. The average age of the squad was 22. Club vs country issues limited call-ups with only token complaints from Klinsmann. Such an approach is only possible because the USMNT begins the road to 2018 with a friendly schedule.

European nations roll into the fall without a similar luxury. The USMNT won’t play a game that counts until next summer’s Gold Cup, a tournament they qualify for automatically. UEFA puts all of their nations through qualifying and it starts just a couple of months after the World Cup.

Take England, for example. After a single warm up friendly against Norway, the Three Lions traveled to Basel on Monday to begin their quest for France 2016 against Switzerland. England won 0-2, with both goals coming from former Manchester United striker and new Arsenal signing Danny Welbeck.

Manager Roy Hodgson’s team was a mix of young and old, a strong step towards the future that nevertheless included a core of names that appeared in Brazil. Hodgson’s team wasn’t “experimental” because Hodgson didn’t have any time to experiment. The game against the Swiss is actually England’s toughest match in a very forgiving qualification process. He had no option except for first choice.

On one side of the Atlantic, a team hits the reset button on their program. They’re free to try out new players and new systems. Little more is on the line than pride. On the other side, a team moves from the world’s biggest tournament to their continent’s biggest tournament.

At least in the North American Zone of CONCACAF, the schedule allows for flexibility. It’s worth pointing out that the Caribbean Zone is already playing games that count in the qualifying tournament for the Gold Cup. Meanwhile, in Europe, it’s navigating a lengthy qualifying process.

For the European countries, giants and minnows alike, new approaches are limited to those can still bring results. There’s no room for long-term plans focused on Russia 2018. France 2016 is what’s important right now.

England manager Roy Hodgson can inject some new blood, but he can’t risk injecting too much of it at one time. Rather than laying out a long-term plan with an eye on Russia 2018, the English coach must work more methodically, picking his spots when changing over his team.

Perhaps in the largest difference between Hodgson’s “new” players and Klinsmann’s is the type of player in question. For England, they are players already making a mark on the top level, usually as regulars in the Premier League. Klinsmann can look wider, including players still on the precipice of launching their full senior careers.

It would take a broad study of teams in these disparate situations to know if either is better for the development of a team in the post-World Cup period. The European powers change over their talent “on the run” while working through qualifying (noting that that much of the competition is fairly weak). The top nations in the Americas don’t face qualifying for their regional championships, with Brazil, Argentina, Uruguay, et al facing a longer timeline and less pressure in CONMEBOL. Like the USMNT and Mexico, the South American giants can make wholesale swaps in player groups to more potential contributors from the next generation a chance to prove themselves.

One can’t help but wonder if the New World way helps with developing depth, especially for those countries traditionally rich in talent.

In the last World Cup, two European sides and two South American sides made the semifinals. A European nation beat a South American nation for the title. None of that tells us anything about the effect of competition early in a cycle on the progress of a country from one era to the next, especially in light of the long-standing cultural advantages held by those final four.

Integration of new talent is key to the success of any World Cup team. However, the real work begins at much younger levels. As Germany proved, the structure the feeds the senior team is much more important than any notion of experimental freedom from one cycle to the next.

Nevertheless, Klinsmann, Mexico’s Miguel Herrera, and their South American counterparts have an advantage European coaches would no doubt take if they could. The opportunity to range far afield in the bid to expand the player pool, while at the same time testing new notions of style and strategy.

If nothing else, the start of a new World Cup cycle means something very different for nations on either side of the Atlantic. Here, it means fresh faces marking a fresh start. In Europe, it means heading straight back into the business of winning, with all of the restrictions that entails.