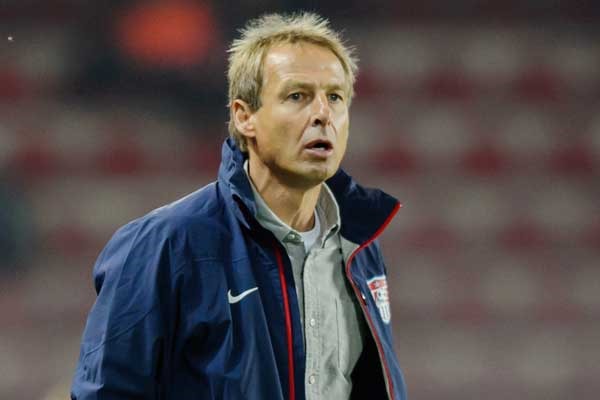 By Jason Davis – WASHINGTON, DC (Sep 5, 2014) US Soccer Players – When the USMNT took the field in Prague against the Czech Republic, 53 days had passed since the World Cup final in Brazil. 65 days since the USMNT exited the tournament with a 2-1 loss in Belgium after extra time. That game served as both an indication of how far the USMNT had to go to compete with the elite and how exciting the next generation of talent could be.

By the time the USMNT hit the field in Prague to get the new four-year journey to Russia 2018 underway, the program had a goal. Head coach Jurgen Klinsmann wasted no time in setting the bar for his team in a tournament that won’t be played for another 44 months, on the other side of three other competitions, the Olympics, and CONCACAF World Cup qualifying. By Klinsmann’s estimation, the USMNT should be World Cup semifinalists next time around.

“This is our goal going towards Russia, not to stop at the Round of 16, maybe not to stop at the quarterfinal,” Klinsmann told NBC Sports’ Arlo White. “To say clearly, listen, we have four years to prepare this cycle. Our goal is going to a semifinal in a World Cup. And that means a lot of work, a lot of competition, a lot of grind.”

It’s worth noting that Klinsmann isn’t actually predicting that the United States will make the final four in Russia. Instead, he’s setting out a target for the whole of the USMNT program. The declaration is a challenge to both to those players in the pool now and those who might imagine themselves included in the future. It’s also yet another example of Klinsmann talking, talking, talking, without producing any real idea of how he plans to get where he says he wants to be, couched in the gauntlet throw.

It’s also Klinsmann passing the buck, in a way. The USMNT head coach has the unique ability to shift the burden for meeting the goals he sets onto the players and away from himself. It’s almost as if Klinsmann is a martial arts master, sitting on top of the mountain, demanding new levels of commitment from his students while remaining beyond reproach himself. American soccer is lucky to have his wisdom and direction.

In other words, Klinsmann is saying that the United States should be a semifinalist at the World Cup in four years, and if they’re not, well, the players, or the system, or the culture of American soccer, or the invisible bogeyman that holds American players from challenging themselves, will be responsible for that failure.

Klinsmann is no longer the savior of the USMNT that he was once painted to be. That doesn’t mean he’s dropped the bearing of a man who has all of the answers. Whether he does or not is really no longer in question. Despite promising a revolution of proactive soccer built on possession, Klinsmann’s team played a markedly negative brand of the game at the World Cup in Brazil. It might be unfair to think that Klinsmann could have transformed the USMNT in just three years on the job, but fewer would call his stylistic choices into question if he himself hadn’t so consistently delivered rhetoric on the subject.

The tone is set now for four more years of Klinsmann speaking in vague terms about how the USMNT’s style should match the spirit of the country they represent. Remember that prior to setting a semifinal goal for the 2018 World Cup, Klinsmann made headlines when he said that the United States wasn’t good enough to win the tournament. Even if he was right, even if everyone knew he was right, and even if he was eventually proved right via the Round of 16 exit suffered by the Americans, fans and casual observers alike took issue with his “defeatist” attitude.

Whatever aspects of the American mentality Klinsmann liked to invoke, his pre-World Cup proclamation was evidence he still didn’t quite get it.

How clever then, the statement of intent so far out from the next World Cup? How clever the establishment of a goal that is sufficiently high to represent a new water mark for the Americans, but not so haughty as to imagine the USMNT as World Cup champions? Plenty of nations have made the semifinals from outside of the traditional powers, including Turkey as recently as 2002. With a good group draw and a bit of luck, why shouldn’t the United States target the last four?

Is this Klinsmann learning from his previous misstep (one he didn’t seem overly worried by at the time), or just more of his pseudo-motivational machinations?

Does Klinsmann intend to use the World Cup semifinals as a marker for the entirety of the cycle? Or was a flippant comment made at a time when there’s only room for optimism? A new cycle is a new dawn, a clean slate, a wealth of possibilities unsullied by any struggles or unmet promises.

Klinsmann knows this, and he intends to milk it for all it’s worth. Semifinals or bust in 2018… maybe.