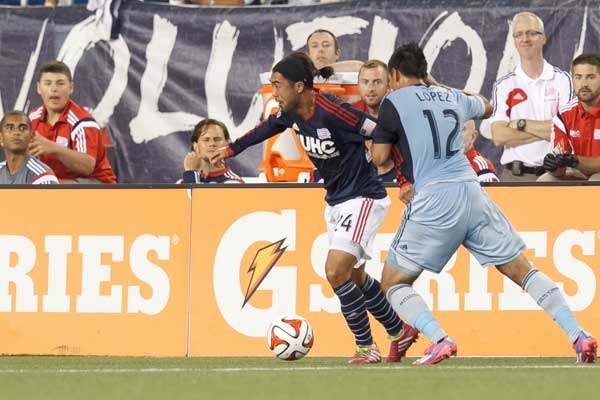 Toronto FC didn’t get the benefit of the new coach turnaround, losing in their first game under Greg Vanney, losing on the road at Philadelphia. On the West Coast, the Seattle Sounders had no problem with Chivas USA as week 26 of the 2014 MLS season gets a midweek start.

The Philadelphia Union shutout Toronto FC 1-0 at PPL Park. Conor Casey scored the game’s only goal in the 55th minute. Zac MacMath needed three saves for the shutout. Toronto FC finished a man down with Ashtone Morgan seeing red in the 77th minute.

The New England Revolution returned to their earlier season form with a 3-1 win over Sporting Kansas City at Gillette Stadium. Sporting Kansas City took the lead on the road after 9 minutes when Soony Saad scored. Teal Bunbury equalized for New England in the 45th with Jermaine Jones picking up the assist. Lee Nguyen scored three minutes later and added a goal in stoppage time.

“I think that Kansas did not have that many chances and I think that the first half we controlled the game,” Jones said “They had that one throw-in when I flicked it and they scored. When you watch the whole game – I thought that we played better soccer. At the end of the day I think we deserved to win.”

At StubHub Center, the Seattle Sounders beat Chivas USA 4-2. Seattle led 4-0 at halftime with Obafemi Martins and Andy Rose both scoring twice. Brad Evans assisted on three goals. Chivas USA’s Marco Delgado pulled a goal back in the 51st and Ryan Finley converted a penalty in the 60th minute.