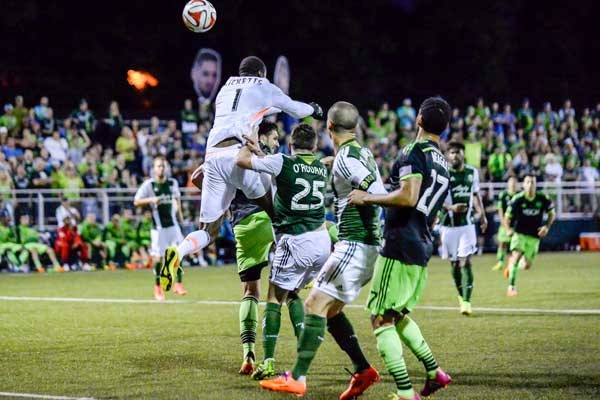 If the Seattle Sounders were playing the Philadelphia Union in an MLS game instead of the 2014 US Open Cup final, it would be a decided mismatch. The Seattle Sounders are the better team on better form. Currently the top team in the Western Conference and leading the Supporters' Shield table for best overall record by 7 points, Seattle is the team to beat in MLS. Real Salt Lake couldn't manage that on Friday night, losing 3-2 at CenturyLink Field. Seattle now travels cross-country in a competition they've dominated in recent years.

Seattle and DC United have three US Open Cup titles each. With a win, Seattle would pull even with the Chicago Fire at four titles. The record, held jointly by Bethlehem Steel and Maccabi Los Angeles, is five. Seattle won three US Open Cup titles in a row from 2009-2011 and lost the 2012 final on penalties. They're well aware of their place in US Open Cup history and what it would mean for the club to take the lead in overall wins.

That commitment to the US Open Cup is rare among MLS teams, even for some teams that won it. A good year ending in a trophy doesn't necessarily mean prolonged commitment to valuing the US Open Cup. Even Seattle isn't moving games to CenturyLink Field or using their best available lineups. The US Open Cup in the MLS era is about managing expectations and only caring in the later rounds. MLS coaches normally don't worry about their jobs when an Open Cup run ends earlier than expected.

For the Philadelphia Union, the Open Cup represents what it should for any MLS team that hasn't won the MLS Cup. It's a chance to lift a meaningful trophy, one with a longer history than US pro soccer. It lacks the same pressure as the MLS playoffs, but the level of difficulty is high. Part of that is the gamesmanship of managing rosters and venues. That's as much a part of the US Open Cup experience as the schedule.

Tuesday's final falls on a school night not normally associated with professional soccer. The enthusiasm for the tournament isn't high even in the cities where it's well established. It's expecting a lot to think that Philadelphia plays for its first trophy at anywhere near capacity. Still, this is a better option than the old pay to play model US Soccer previously used to determine who hosted games in the later rounds. What the lack of interest so far in the greater Philadelphia region highlights is the old US Open Cup problem. The lack of interest in general.

2014 changed nothing it that regard. Trying to motivate all the teams entered into the Open Cup to focus on advancing is still an issue. So is attendance. US Soccer added additional prize money, though it's still low for a tournament requiring MLS teams to play five extra games to win. There's the entry into the Champions League for the winner. Still, at times this seems like a parody version of the domestic cup tournaments in Europe, especially the model from England. Two MLS teams play each other and attract a crowd of under 3,000. Two MLS teams playing each other in the final should do better, but expecting Philadelphia to beat its regular season average of just under 18k is probably a reach.

For the US Open Cup, it's always those bigger issues taking the focus away from play on the field. This is a mismatch by MLS standards. Philadelphia is 17 points behind Seattle in the standings, with 9 wins to Seattle's 17. As expected, Seattle won their MLS meeting, 2-1 back on May 3rd.

There are good reasons why this feels like Seattle's Cup to lose.

With LAFC already putting on a game to remember and Chicharito with the Galaxy, the two LA teams are set for big seasons when the schedule resumes.

The 1996 Tampa Bay Mutiny finished with the best regular season record before exiting the playoffs in a lopsided aggregate loss to DC United.