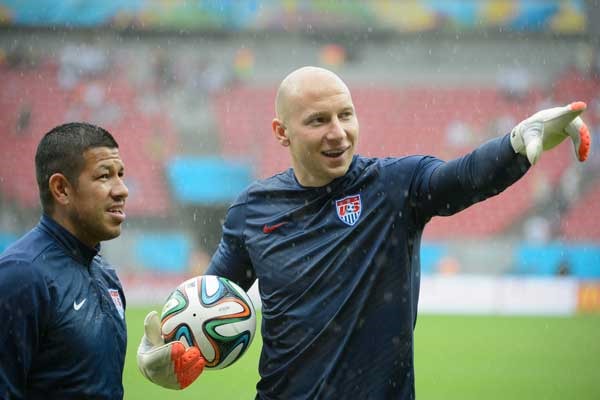 By J Hutcherson – WASHINGTON, DC (Sep 2, 2014) US Soccer Players – The USMNT squad regroups in Prague for an international friendly with the Czech Republic on Wednesday (2pm ET – NBCSN). USMNT coach Jurgen Klinsmann surprised some with his choice of players, naming a young squad with six uncapped players. Here are 4 things worth watching as the USMNT officially begins the next four year World Cup cycle.

Strength of the USMNT squad

This is always an issue with any friendly. Availability and withdrawals hamper every National Team coach in world soccer, and the USMNT is no exception. For Jurgen Klinsmann, it’s as much about the squad he can reasonably get as the squad he wants. Part of Klinsmann’s answer for the September friendly was calling in young players. It makes for an easy talking point when previewing the game, but what it really means long term is an open question. Opportunity is the focus of this game for several reasons. It’s an opportunity for the players to impress Klinsmann and an opportunity for Klinsmann to see the players he chose in real game situations. It’s also an opportunity presented by the schedule and the choice to play in Europe.

Strength of the Czech Republic squad

In theory, the Czech Republic should use this game as a shakedown before playing for points against the Netherlands next Tuesday in Euro 2016 qualifying. In practice, it’s hard to know what kind of game the Czech Republic has in mind against the USMNT. Is this an attempt to see what kind of condition the squad is in? Will coach Pavel Vrba be looking to see what he has available in reserve should the need arise against the Dutch? As always with international friendlies, it’s a question of how long we’ll see something resembling a competitive first choice team. We know Klinsmann plans to swap out goalkeepers at the half. Should Vrba follow suit with the kind of substitutions we rarely see in games that count, this could be a very different game in the second-half.

Once again, MLS decided to not just play through an international window. They chose to schedule three games on the same day the USMNT plays in the Czech Republic. Of course, two of those MLS teams playing on Wednesday night are Sporting Kansas City, the Seattle Sounders, and Toronto FC. That took Graham Zusi, Matt Besler, DeAndre Yedlin, Clint Dempsey, and Michael Bradley out of consideration for the USMNT. Had MLS shifted games away from Wednesday, Klinsmann should have had the option of bringing in more MLS World Cup players alongside Nick Rimando. Real Salt Lake plays on Saturday, with Rimando expected to play a half against the Czech Republic.

A college call-up for the USMNT

It’s been a long time since we’ve seen a college player called into the full USMNT, almost 20 years in fact. Jurgen Klinsmann surprised a few people by calling in Stanford’s Jordan Morris, but this is a player clearly on his radar. Morris benefits from exposure. He’s well known in US Soccer circles, and could easily be playing his first season in MLS rather than spending his sophomore year with Stanford. Still, Morris is a rarity in an era where college soccer is under close scrutiny for how it prepares players for the professional game. Morris isn’t an example of what college soccer does right. At the same time, Klinsmann made a choice that can’t help but send a clear message to college soccer players. If you’re good enough, the opportunity is there before you play your first professional game.