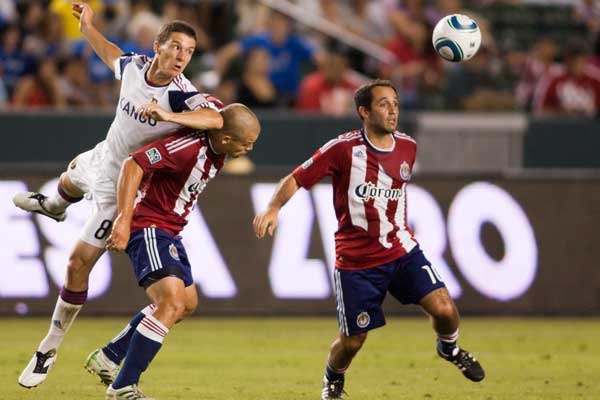 By Luis Bueno – Carson, CA (Oct 22, 2014) US Soccer Players – Chivas USA and Real Salt Lake ushered in the era of MLS expansion when the two joined the league in 2005.

The 2005 expansion returned MLS to a 12-team league. The success of the class of ’05 led to later rounds of successful expansion, shutting the door on the earlier era of expansion chased by contraction three years later.

Somewhere along the way, the ’05 expansion brethren split apart from one another. The two teams took distinctive paths. Real Salt Lake thrived and continues to do so while Chivas USA became a laughingstock, first off the field and then on it.

Perhaps it is fitting then that Chivas USA’s last-ever road match will be against Real Salt Lake. Chivas USA will bid farewell to opposing fans with their visit to Rio Tinto Stadium on Wednesday. RSL are preparing for the playoffs while Chivas USA will take their penultimate step toward their grave.

Nobody could have foreseen such an end for these two. When team representatives were present at MLS Cup 2004 to take part in the coin flip to determine draft order, nobody thought one of those teams wouldn’t last a decade. This was a new start for MLS expansion, where both teams would succeed.

Real Salt Lake is as strong and sound as anyone in MLS while Chivas USA was never able to say that. What went wrong?

Winning does not always solve everything. The Miami Fusion won the Eastern Conference in their final season. The 2005 San Jose Earthquakes relocated even though the club won the Supporters’ Shield that season. However, winning does have positive benefits. Winning teams generate buzz and let the decision-makers know that what the club is doing is working. A winning team is more likely to spend resources in order to keep that team a winning club.

Most importantly, winning draws crowds. Fans are more likely to support a winning team than they are to support a club that has no chance of making the postseason. A big part of why Chivas USA were a laughingstock was their poor attendance, which bottomed out this year. With all the problems Chivas USA had off the field, the lack of wins was the first tangible issue that began this death march.

Had Chivas USA been a playoff regular like RSL, it would have been tougher to shut down the franchise. RSL will make their seventh consecutive playoff appearance, the longest active streak in MLS. Chivas USA last made the postseason in 2009. The black cloud of negativity that follows Chivas USA was borne of that failure and eventually permeated throughout the club.

There was a time when Chivas USA was stable. From 2006-09, Chivas had decent attendance, had players the fans connected with, and gave off a positive vibe. On the front-office end, the club tried to bolster their executive corps by bringing aboard Shawn Hunter as club president and part-owner in 2007. It was an investment in the future but lasted only three years. Hunter resigned following the 2010 season to spend time with his family.

Chivas USA’s era of instability began with Jorge Vergara. MLS officials, namely commissioner Don Garber, gave Vergara carte blanche on many issues. Garber never publicly criticized or came down on Vergara with anything but positive words, even after the league bought Vergara out.

RSL had no such issues. They had successful entrepreneur Dave Checketts, who made two outstanding and perhaps unpopular decisions. Checketts quickly looked to build a stadium and despite initial setbacks eventually helped bring Rio Tinto Stadium to existence. Also, Checketts hired Jason Kreis as coach in 2007 while Kreis was still playing for the club. Kreis retired to start his coaching career.

RSL have only had three coaches, while Chivas USA had that many in its first season.

Real Salt Lake’s two owners, Checketts and current owner Dell Loy Hansen, each had and have strong ties to Salt Lake City, both in their personal and business lives. Vergara came around to Chivas USA matches now and again. Former co-owner Antonio Cue was based locally, but lived in Bel Air, a far cry from where Chivas USA’s target audience resided.

Chivas USA alienated fans from the start with their disastrous “Adios Soccer, Hello Futbol” campaign. Their shield was simply a remake of Chivas Guadalajara, Vergara’s Liga MX club. Chivas is famous for fielding only Mexican players, something that wasn’t possible in MLS, whether or not it even made sense.

Chivas USA never connected with their community because they never knew anything about their community. Vergara and Cue thought the Guadalajara shield would appeal to Chivas fans across Southern California and the United States while RSL made their shield out of nothing, made connections with their community, and won hearts over that way.

Where this leaves us is simple. Real Salt Lake will play in MLS next season. They’ll likely be competitive in a Western Conference revamped through another round of expansion. Chivas USA won’t. Even if MLS made an about face and decided to somehow field a team in 2015, it wouldn’t be called Chivas USA. On Sunday night, Chivas USA joins the Tampa Bay Mutiny and Miami Fusion as dearly departed and ill-fated MLS franchises.