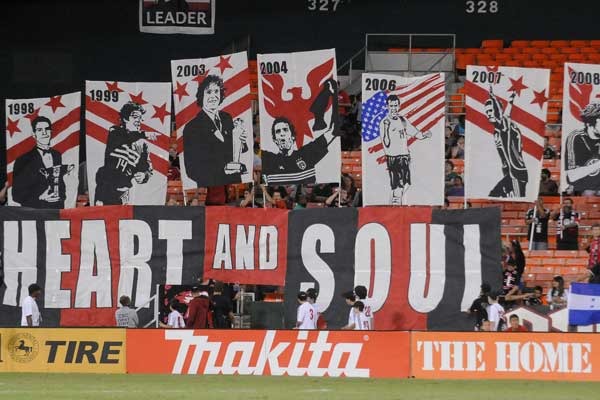 By Charles Boehm – WASHINGTON, DC (Oct 3, 2014) US Soccer Players – On September 22, DC United staged a press conference to announce head coach Ben Olsen’s new contract. Reportedly five years in length and as ironclad as one will generally find in MLS, Olsen’s new deal is evidence of his deep connection to DC United.

The 2006 World Cup veteran has been at the United helm since August 2010, a period comprising part or all of two of the statistically worst seasons in MLS history. That includes last year’s all time low, 3-24-7 campaign. Club ownership kept their powder dry. Swayed by Olsen’s enduring status as a club icon among most DC supporters, as well as a revitalization plan presented by Olsen and general manager Dave Kasper last summer, United kept faith.

On this occasion, patience paid off. That plan has catapulted DC from worst place to first-place in the MLS Eastern Conference. This season’s team is on track for the biggest year-on-year turnaround in MLS history.

A week later, ESPN published a piece confirming a previous Sports Illustrated report that luckless club Chivas USA would indeed be put “on hiatus” for at least two MLS seasons. During that time, new owners prepare to launch what in real terms is a new MLS club in Southern California.

Ten years after their founding, it seems the Goats will be taken off life support in a few weeks and allowed to die, mourned only by a handful of long-suffering fans and generally mocked by the rest of the soccer community.

These two seemingly disparate events at opposite ends of the MLS wheel of fortune drive home the singular value of the most precious – and elusive – commodity on the business side of North American soccer. Here, the pro levels still somehow retain an arriviste, jury-rigged quality even two decades after the founding of MLS.

We’re talking about a soccer culture.

A variety of fateful factors allowed DC United to prosper more or less out of the gate when the league launched in 1996. Driven mainly by successful teams, smart management decisions, and the fertile soil of the capital city’s soccer scene DC achieved. Nearly 20 years later, “the Black-and-Red” faces one significant hurdle that goes beyond anything they do on the field. Their frustrating quest for a soccer-specific stadium. However, DC United is a legitimate club with a culture comprising fans, players, employees – and in recent years, even their youth academy system to a certain extent. This has enabled United to survive their imprisonment at antiquated RFK Stadium.

As District of Columbia politicians dawdled and double-crossed them on the stadium front, Baltimore made a real play to lure United north. After a brief flirtation, the club decided that their heart – and fans – lived in the District and its immediate environs, and re-committed to securing a downtown stadium despite the many difficulties.

In similar fashion, United could not quite bear to quit on Olsen even after the woeful 2013 campaign dealt a hammer blow to everything and everyone associated with the club. The coach’s spirit was part of the fabric of the organization. DC supporters preferred that United face their problems with him, rather than pin them on him.

“They stayed by me,” Olsen said of the supporters who’ve fallen in love with him since he arrived as a hotshot rookie winger in 1998. “There weren’t signs in the stadium saying “Fire Olsen.” That’s a big deal. That means a lot: Fans are powerful. I’m already indebted to them for the year of faith that they’ve given me as a player. But that’s something I won’t forget – that they didn’t turn on me last year when times got tough. And I like to think that now we’re starting to repay them a bit for their faith.”

As foolish as it may have appeared from the outside after last season, Olsen still meant a great deal to DC United the community, which includes but also overlaps D.C. United the club. For all the errors and setbacks of recent years, that team still represents more – far more – than a placeholder in MLS’s portfolio.

The league has proved unable to foster such deep roots all of its other markets, even those of similar vintage to DC. MLS has actually had the most success in co-opting and building upon much older narratives in places like Portland and Seattle. Remember when fans in Seattle essentially broke the online voting system to decide their MLS expansion club’s name, insisting that the durable identity of the Sounders as a write-in choice?

The most iconic teams around the world mean far more than just their logo, the 11 players on the field ,and the traveling party watching from the bench, of course. They inhabit and represent their communities in a way that endears them to their supporters more deeply, in many cases, than their regular lives.

We’ve seen this phenomenon with the USMNT, a squad that couldn’t even be sure their own fans would be in the majority at any given home game 20 years ago. The USMNT now packs World Cup arenas – whole cities, really – in distant Brazil. Fans set their calendar to the USMNT’s schedule, and spend thousands of dollars just to be able to sing chants and love songs to their heroes in person.

This is the connection, the passion that MLS has tried to generate, or at the very least tap into, since its inception. Chivas USA presents perhaps the harshest lesson along the way. The attempt to fertilize the SoCal turf with Mexico’s strongest soccer brand failed so miserably that euthanasia is now the preferred option.

And most damningly, there’s hardly anyone at the club – or more accurately, OF the club – to insist on an alternative, to carry the flag into the lower divisions no matter what, as deeply dedicated fans in places like Wimbledon, England, Italy’s Fiorentina and fallen Scottish giant Rangers have done.

They’ve got no culture. Or most accurately, they couldn’t get more than a few hundred loyalists to jump on board and stay on board.

Make no mistake: The diehard CUSA supporters who stuck around this long are the league’s best asset in this situation, and one they’re further antagonizing with this “hiatus.” The dedication shown by groups like Black Army 1850, who have pledged to outlive their Goats and eventually side with the new entity, coining the glorious Twitter hashtag “#TheDeadShallInheritTheCity,” is simply awe-inspiring.

Club, country, community. That’s the basis for MLS’s new logo and by extension, the stated overarching principle of everything the league does. Hopefully, it means more than marketing.

This stuff matters, and not just for MLS. Club culture helps identify and grow strong youth players eager to rise through the ranks and represent their cities, regions, and nation. That culture draws new fans to the sport, unites disparate members of the existing – and all too often balkanized – soccer community, and helps draw more civic support for projects like United’s new stadium.

It’s what creates the “root to fruit” environment that undergirds the world’s best, be they clubs or national teams. And it’s very, very hard to make the climb into the global elite – the hurdle currently facing the USMNT – without it.