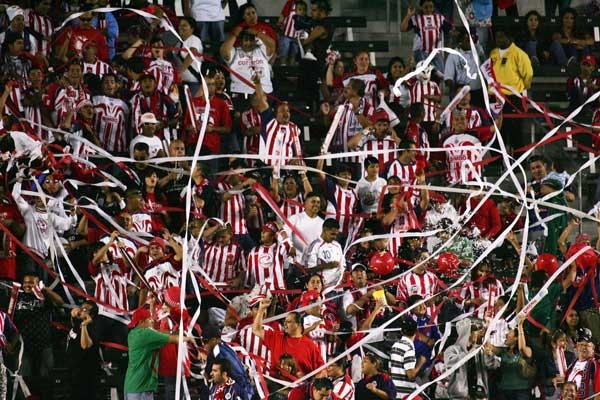 By Luis Bueno – Carson, CA (Oct 1, 2014) US Soccer Players – Once there was a dream of a club called Chivas USA. Linked to a storied and popular Mexican club, Chivas USA was supposed to capture the Latino market in the Latino-heavy area of Los Angeles. A decade later, the dream turns into a bona fide nightmare, one that has marred MLS commissioner Don Garber’s tenure.

Now, the club will likely go into a suspended existence with the supporters of Chivas USA treated like second-class citizens by the same league who wants their support.

Multiple reports have surfaced recently about Chivas USA and the possibility of the team not playing in any form in 2015. Tuesday, SI.com’s Grant Wahl linked a deep-pocketed group led by wealthy Vietnamese entrepreneur Henry Nguyen and Cardiff City owner Vincent Tan with the lame-duck franchise that Chivas USA has become. According to the reports, the club currently known as Chivas USA will go dark for two years and resurface in 2017, at a location to be determined.

Certainly, Garber and MLS expect Chivas USA fans to also go dark and come back in 2017 with renewed fervor and enthusiasm in the team. There will be zero connection to Chivas USA, of course, but MLS will look past that.

This new-look club is nearly as poor of an attempt as Chivas USA was, with one exception.

Chivas USA could have worked.

Had Chivas USA learned from the mistakes of 2005 and gone on to play the way they did in 2006-09, things would have been very different today. But Garber and MLS paid little to no attention to the red flags that went up at the end of the club’s era of stability. There were no Mexican superstars or Mexican prospects making their way from Guadalajara to Carson. Club executives began a mass exodus somewhere around that time, with respected officials like Dennis te Kloese and Shawn Hunter walking away from the club. Attendance was sagging.

Garber and MLS preached patience and stood by the club and Vergara. Even when the ship really began to sink, in 2012, the commissioner and the league stood by Vergara.

“The whole idea when this club was launched was to try to have a club that would be specifically targeting the massive Hispanic population in this country, but more specifically in Southern California,” Garber said in November 2012. “The execution wasn’t right and you’ve got to be smart enough and brave enough to admit when you don’t get things right. I believe in what this opportunity can be, and I’m not going to quit until we get it right.”

In 2013, reports surfaced about a potential MLS takeover of Chivas USA, but Garber once again was quick to stand by Vergara.

“MLS is fully supportive of the current owners of Chivas USA and has never considered taking over the club or moving it,” the league said in a statement.

Earlier this year, of course, Chivas USA took over the club and bought out Vergara and wife/business partner Angelica Fuentes.

“We are very appreciative of everything they did to try to make things work in Los Angeles,” Garber said in an open letter to fans.

In that same letter, Garber preached patience and loyalty from Chivas USA supporters. “We truly believe that Los Angeles deserves two strong soccer clubs,” Garber said, “and with some hard work and the commitment of loyal and passionate fans, Chivas USA can become one of the top organizations in Major League Soccer.”

Now, these fans take a two-year hiatus from supporting a club in MLS and then instantly become a passionate supporter of whatever becomes of the LA club. Ridiculous nonsense on top of more ridiculous nonsense.

At any time during Chivas USA’s early years could the league have stepped in and helped find a site for a soccer-specific stadium? MLS worked hard in doing so for multiple teams across the league during that time, but not Chivas USA.

Other teams have thrived, notably Real Salt Lake and Sporting KC. Prior to their own rebrand, Sporting KC had some of the worst attendance figures in the league and was an afterthought in the MLS landscape. Now, the club is a hotbed of passion, winning the MLS Cup title just last year. That could have been Chivas USA, but MLS stood idly by.

So what now? This new venture promises a lot. Surely, this investment group that is willing to spend $100 million for this club will invest money into the club. It’s probably worth noticing that there is already a club here that does that. The LA Galaxy have put millions of dollars into their roster over the years. So which fans then will the new LA team try and capture with this approach?

Mexican soccer fans did not turn out en masse for Chivas USA. The chances of those supporters showing up to support an LA MLS team is nonexistent. European soccer enthusiasts who don’t support the Galaxy are highly unlikely to turn out and support this new-look club. What would the allure be? Those fans who turned their gaze towards the Galaxy during the Beckham years either stuck around and became Galaxy fans or looked away after the fanfare died down.

Where exactly are these passionate and loyal fans? Chivas USA supporters – and there used to be a sizable amount of them – have been burned too many times by MLS. These fans have been trampled on by fellow MLS fans, have been the subject of joke after joke, ridicule upon ridicule, and now the league is counting on them to be there in 2017 for the new-look club?

MLS of course will trumpet this new ownership group and praise them and their desire to invest in MLS all the while MLS executives salivate over the new club’s financial resources. Another dream will soon begin in LA, and the cycle will continue.