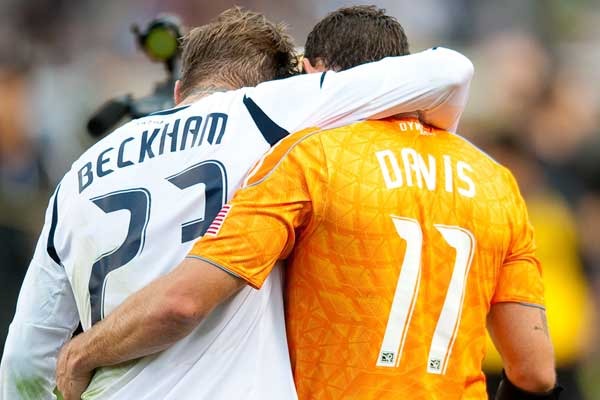 By Jason Davis – WASHINGTON, DC (Oct 29, 2014) US Soccer Players – Nothing in MLS, at least during the 2.0 era of the league, stays the same for very long. That’s definitely true of the playoff format, an ever-changing set up that has seen it’s fair share of revamps over the course of the last five years. So much has changed. The number of teams, the number of games played between teams, the ability of teams to jump conferences, etc. It’s tough to draw conclusions without consistency, and the MLS playoffs are anything but consistent.

That’s why it’s hard to know the exact impact of the 4th vs 5th-place Knockout Round game on the teams involved. For some of the participants, merely making the MLS playoffs is an achievement. Playing in midweek, with a chance to move on to the conference semifinals, isn’t a disappointment or a burden. Instead, it’s an opportunity. Others will find their final regular season record underwhelming, the added game a symbol of their failure to secure a place higher up the table. It’s anyone’s guess if the relationship between expectations and final seeding play a role in playoff success.

2014 is year three of the current 10-team, split-conference format. In 2012, the first year of 4th playing 5th, both MLS Cup finalists emerged from the Knockout Round. The Houston Dynamo went on the road to Chicago as the fifth place team in the East and beat the Fire 2-1. Two-legged series wins over Sporting Kansas City and DC United followed, making Houston surprise conference champs and putting them in the championship game.

Eventual champions the LA Galaxy took a similar path to the MLS Cup final. The Galaxy did finish fourth in the Western Conference, however, meaning they hosted a play-in game against the Vancouver Whitecaps. After beating Vancouver, LA advanced past the San Jose Earthquakes and Seattle Sounders. 2012 was also the first year hosting rights for the MLS Cup went to the team with the higher point total during the regular season, leading to a home date for the Galaxy and their second consecutive title.

2013 was a little tougher on the play-in participants. Houston again found themselves playing the extra game, having finished fourth in the Eastern Conference. The Dynamo beat the Montreal Impact at home to advance to the next round, where they dispatched the Supporters’ Shield holders, the New York Red Bulls, over two legs. In the conference final, though, their previous luck against Sporting Kansas City ran out. Sporting KC beat Houston 2-1 in the second leg in Kansas City after a draw in Texas.

On the other side of the bracket, it was the Sounders advancing out of the Western Conference play-in game with a victory over the surprising Colorado Rapids. Seattle’s reward was a massive clash with the Portland Timbers, a matchup of familiar rivals that pushed the two teams’ contentious history to an all-time high. The top-seeded Timbers won both legs of the series, sending the Sounders home disappointed.

What does two years of history mean for this year’s play-in teams? Not much, more than likely. The first season of the format could very well stand out as an aberration in future years, provided MLS sticks with it long enough to allow for some sort of reasonable analysis.

The four teams in the play-in round in 2014 arrive at the stage in very different places in their respective seasons.

In the West, the fifth seed is Vancouver, a young team with an inexperienced head coach happy to hold off the Timbers to get into the postseason. That doesn’t mean they’ll be a pushover for FC Dallas on Wednesday night in Frisco, but it could play to the home side’s advantage.

For their part, FC Dallas is a talented team entering the tournament after a very up-and-down regular season. The club has the ability to compete for honors out West. Thy dealt with injuries and international absences during a campaign that saw them start very hot only to vacillate between wins and losses most of the year.

Neither looks like the type of side that can charge all the way to a final game appearance from the play-in round, the way LA and Houston did in 2012.

The same isn’t true in the Eastern Conference. The Knockout Round pits New York against Sporting Kansas City at Red Bull Arena on Thursday night. Sporting Kansas City is the defending MLS Cup champion. Despite their struggles towards the end of the regular season, Sporting KC still seems capable of winning the conference from the last playoff seed. When New York is on, they can score with anyone. Whether or not they can find the rhythm consistently enough to go all the way might depend on Thierry Henry’s injured Achilles tendon.

Logically, the play-in game must be a hindrance. It’s an extra game, in the middle of the week, that can require extra travel. Winning means flying quickly home to prepare for the first leg of the conference semifinals on the weekend. It would be impossible for the game not to have an effect. When we talk about teams wanting “avoid the play-in game”, it’s that logic in play.

That’s all we have to go on, though. Logic, not history. This is MLS, where the history we have is not enough to tell us much of anything.