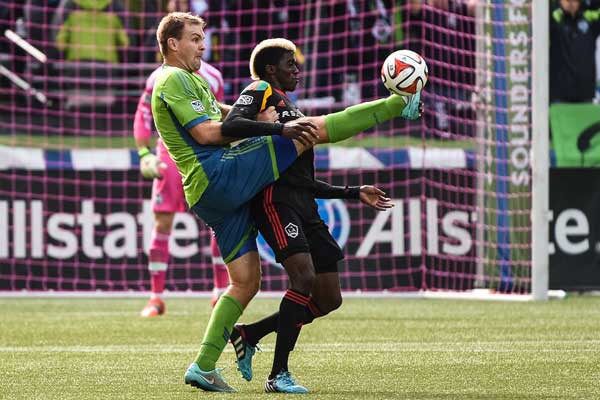 By Jason Davis – WASHINGTON, DC (Oct 31, 2014) US Soccer Players – The debate over this year’s Defender of the Year in MLS has something of a retro vibe. The two players most often mentioned as leading contenders for the award are the Seattle Sounders‘ Chad Marshall and DC United‘s Bobby Boswell. Both have been here before.

Marshall and Boswell are both previous winners of the MLS Defender of the Year award. Both won it long enough ago that the newest generation of MLS fans may not even remember when. These are defenders headed into their 30s who are nevertheless at the top of their trade in MLS, both part of Conference winning clubs. Both are candidates for Defensive Player of the Year because they’re that important to their clubs’ success.

Is this a case of Marshall and Boswell “turning back the clock”? The narrative is attractive if for no other reason than that neither player has garnered this type of praise for several seasons. Perhaps a nod or two in their direction for being “steady veterans”, but for the most part, Marshall and Boswell became afterthoughts when talking about the best center backs in MLS.

A younger generation of players like the LA Galaxy‘s Omar Gonzalez and Sporting Kansas City‘s Matt Besler stepped to the forefront while Marshall and Boswell went about their business in Columbus and Houston, respectively.

Such is the cyclical nature of these things, particularly in soccer where “youth” draws a disproportional amount of the spotlight. Particularly at positions that don’t typically contribute to the score sheet and are that much more difficult to assess.

More than likely – while allowing for the possibility that Marshall and Boswell both really did elevate their games this season – the two MLS lifers found themselves taken for granted after years of consistent play. Health was an issue as well, particularly in the case of Marshall. More time on the field for a good team will make any defender look better.

It’s important to note that both players improved their conditions by making the move to new clubs for 2014. Marshall switched 2013 also-ran Columbus for spend-happy contender Seattle, where MLS elite midfielder Osvaldo Alonso patrols the area directly in front of him. Boswell joined the overhaul in Washington, turnover that brought in competent MLS defenders like Jeff Parke and Sean Franklin to augment the substantial talents of defensive midfielder Perry Kitchen and goalkeeper Bill Hamid.

Rather than some massive uptick in their form this season, both players were on better teams. That moved them back into the spotlight.

Marshall and Boswell were key cogs in sides that finished first in their conferences. Again, it might not be that either player is performing at a level significantly higher than their last few seasons, but that their already high level of play is part of something better than what they left behind.

In the modern MLS, those honors seem like they came a million years ago, as part of a different league. MLS has changed mightily since Marshall and Boswell earned recognition as the best defenders in the league, but it hasn’t changed so much that they aren’t capable of rising to that level again in the right setting.

Sigi Schmid (Marshall’s former coach in Columbus) knew that when he traded for Marshall ahead of the season. Ben Olsen (a former teammate of Boswell’s) knew it when he happily scooped up Boswell in the re-entry draft. Whatever either defender had lost in physical ability they made up for with experience. For two clubs looking to re-form their backlines, that’s invaluable.

Superficial similarities abound between Marshall and Boswell. Not just their age (Boswell is 31, Marshall 29) and experience, but in the path of their careers. Former Defender of the Year winners, once US internationals, and MLS lifers. Marshall and Boswell are part of a generation of players who straddled the line between “MLS 1.0” and the improved “2.0” version.

Doing that and maintaining their roles as starting line center backs through that evolution is difficult enough. Doing it while pushing themselves back into the conversation for the best defenders in MLS, years after they were last recognized as such is worthy of immense praise. Even if all they really did to get that recognition was changing their addresses and suiting up for better teams.