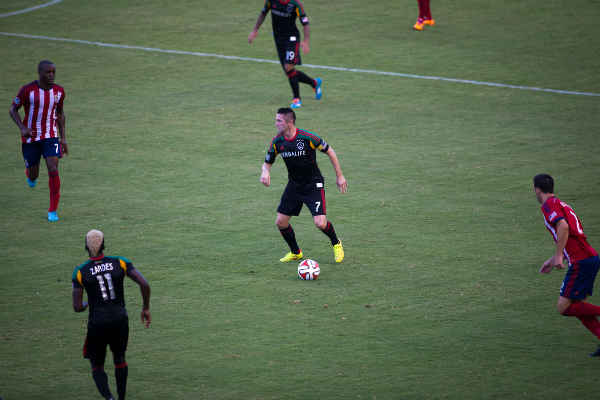 By Luis Bueno – Carson, CA (Oct 29, 2014) US Soccer Players – While Chivas USA existed during the 2014 MLS season in a catatonic and ultimately terminal state, the end itself was quick and painless. Major League Soccer’s next venture into Los Angeles, though, promises to be the opposite. It won’t be as quick and will be rather painful.

The new team will begin play in 2017. That is the minimum amount of time necessary to give this new team a fighting chance. Even two years removed, the ghosts of Chivas USA could still affect this team and franchise. But it’s enough time to try and drum up some excitement and support.

Ultimately though Los Angeles had its chance and failed. With that clearly in mind, a return to Los Angeles is misguided. MLS commissioner Don Garber, though, still gets drool on his tie when talking about Los Angeles.

“LA is a huge market,” Garber said in a conference call. “It’s got lots and lots of soccer fans. It has a very diverse population. It has a lot of sponsors and corporations that have been engaged in the game and want to be engaged in the game further and we feel that we will be able to build a stadium in a downtown location that will connect with an audience that can help elevate the sport in a very, very big city.”

The sport is plenty elevated in Los Angeles. The Mexican National Team draws mammoth crowds here. So do Europe’s giant clubs like Manchester United and Real Madrid. The Galaxy has cornered the market among those who support MLS. Current Galaxy fans will be even less likely to jump ship now than they were when Chivas USA joined the league.

Chivas USA was something different. It may have been initially built on a flawed premise – that Chivas Guadalajara’s fans would support an offshoot club in MLS – but it was different. The Galaxy had their model and business plan and Chivas USA began with their own. They were unique on purpose, helping to make sense of the MLS decision to put two clubs not just in the same market, but in the same stadium.

The new LA team could follow a similar plan as the Galaxy. The owners are reportedly spending around $100 million for this franchise. If the owners are dropping that amount of money on a team, they will also likely invest in players. That sounds an awful lot like that the Galaxy are already doing in the LA market. Why would soccer fans who do not already support the Galaxy have a reason to support the new club?

Proximity is certainly something. There are already rumors about a better location than Carson. Perhaps that’s enough, but there’s another exception. The new LA team could truly embrace the city. They could field a team that reflects the city’s diversity, by investing in the city at the grassroots level, by nabbing local talent and having players who come from the area. Maybe then Angelenos will get behind another take on playing soccer in MLS.

What will be difficult is trying to out-Galaxy the Galaxy.

Yet, from what we’ve already seen and heard, that is the reason why this new group appeals to Garber. His stated formula for MLS success is to be in “a market that is passionate about the sport, that has a great and large corporate base, that has plans for a downtown soccer-specific stadium… and has a committed ownership group that has the desire and the resources to invest in Major League Soccer over a long period of time.”

Los Angeles certainly fits the bill, but is there enough of that to go around for two teams?

There is one other reason the league believes in having two LA-based MLS teams.

“Rivalries matter, that a rivalry with the Galaxy – one of our more successful teams – can elevate the sport,” Garber said. “We saw how successful and popular that rivalry could be with the Super Clasico in the early years of the Chivas USA.”

Dilution also matters. MLS is likely to schedule the Galaxy and their new city rivals at least three times per season which, much like MLS’s presence in Los Angeles, is overkill. Chivas USA and the Galaxy played four regular-season games in 2005-08, and by the end of that run the rivalry wasn’t much of a rivalry.

This leaves us with a simple idea that nobody seems interested in talking about. Chivas USA’s failure should have been a red flag against a second LA team, not a reason to think that starting with a different approach could lead to success.