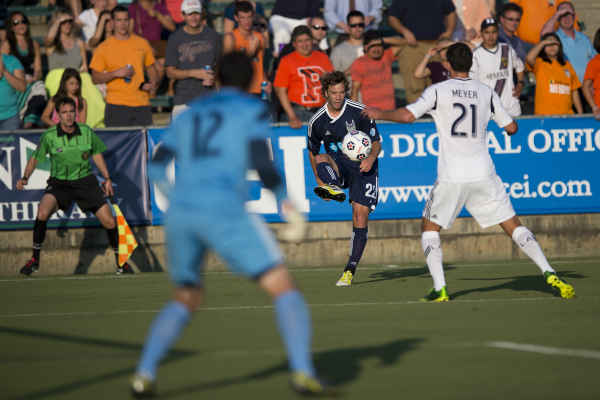 By Tony Edwards – San Jose, CA (Nov 4, 2014) US Soccer Players – While the big news out of the NASL last week was the Cosmos signing Raul, the more immediate, and interesting, news was the end of the Fall Season. Fort Lauderdale Strikers held off Carolina RailHawks for the fourth and final playoff spot.

The NASL runs on a split schedule (Spring and Fall). The Spring champion (Manny Lagos’s Minnesota United) gets the number one seed in the playoffs. Much to their credit, they didn’t take the Fall season off, finishing with 55 points in 27 games. That’s the highest points per game average in either of the top two divisions this year. Minnesota also finished second in average attendance in the Fall season, at more than 9,000 a game.

It’s unfortunate that what Minnesota is achieving on the field is being overshadowed by the ‘will they get an MLS franchise’ situation. Lagos puts out a team that plays good soccer every week and should rightly be considered the favorite to get past Fort Lauderdale in the semi-final round.

The second seed is San Antonio, averaging over 6,700 in the Fall. I just spent the better part of a week in San Antonio, and honestly that attendance number is a surprise. Even from a limited time, it seems to me to be a difficult market for soccer. The NBA Spurs and the NFL Dallas Cowboys, plus local high school and college football took up the lion’s share of the sports attention. Nevertheless, they’ve got a nice stadium. After a blip in 2013, the team is competitive.

Among the teams missing the playoffs, it’s certainly working in Indianapolis. The Indy 11 were an expansion team on the field, but a success in the stands, with numerous sell-outs and an average attendance in the Fall of more than 10,000. The challenge for club president Peter Wilt and coach Juergen Sommer is to improve on their 27 points in 27 games performance while maintaining the attendance enthusiasm.

It might work better in Ottawa, which averaged 5500 per game in the Fall while finishing second from last. Among the issues for Ottawa is that there’s no easy road trips, with the Cosmos and Indianapolis the nearest teams. Admittedly, the same issue faces the Cosmos, at least until the Northern Virginia team debuts.

A good sign for any fledgling league is new investment. Earlier this season, previous owners Traffic was able to sell their stake in the Strikers to new ownership in Fort Lauderdale. Part of the plan is to upgrade Lockhart Stadium. With all the questions surrounding the future of professional soccer in South Florida, pro teams keep playing in Lockhart.

New questions arise for the NASL as they add Jacksonville next season. That strengthens their position in the Southeast, but only briefly. The league is likely to lose Atlanta as a market in 2017 when the city’s MLS team opens play. With Northern Virginia still not committed to a start date, that’s an East Coast of Fort Lauderdale – Jacksonville – Cary – New York. Considering how many seasons MLS spent with an East Coast of DC – New York – Boston, that’s not necessarily a huge problem, but it does limit the ability of fans to travel.

The question for the NASL is still the Cosmos. They’re the league’s flagship, although they play at a college stadium and average less than 5,000 a home game. They have the resources to sign a Marcos Senna or a Raul, and they have a history unmatched in the American game. Hoever, two season in to their return, they are neither New York City’s team nor are they strongly competitive in their own market.

The Cosmos are now up against not one, but two international economic powerhouses in their home market, one of which has a stadium and one of which has two of the biggest names in sports allied. Say what you will about Manchester City’s reasons for joining MLS, but NYCFC is going to be a draw next year. That doesn’t help the Cosmos, Raul or not.

Where these developments and further MLS expansion leaves the NASL isn’t entirely clear. A spot in the CONCACAF Champions League for their champion shouldn’t be out of the question considering the competitive quality of the league. Neither is the stated goal of NASL management to take the US Open Cup very seriously. How trips to Mexico and Guatemala or potentially beating an MLS team in a tournament the top flight sometimes treats as secondary help the bottom line, or even to encourage investment, isn’t entirely clear.

On the field, the NASL product is improving each season. It’s not MLS quality, but that’s typical of any second-division anywhere and shouldn’t be held against the league. Off-the-field, it depends on how you want to look at it: markets moving to MLS and large parts of the country underrepresented or new investment and expansion to some growing parts of the country.

The NASL doesn’t need to compete with MLS to succeed. There’s nothing wrong with an independent league playing games that count, rather than the USL-Pro or minor league baseball model. MLS can’t, and shouldn’t, be in every market, or even most markets. That’s the opportunity for the NASL, finding and growing in markets that work.