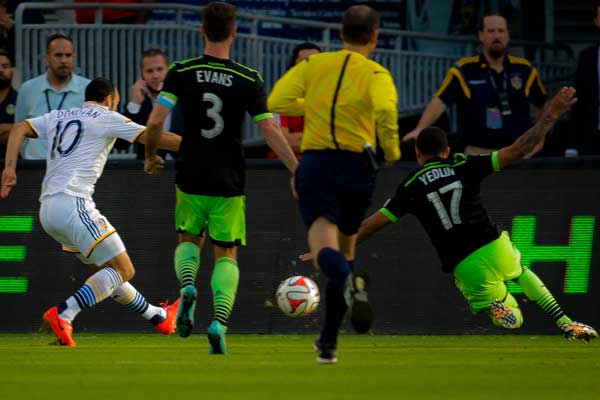 By Jason Davis – WASHINGTON, DC (Nov 25, 2014) US Soccer Players – Something very bad happened on the way to the second leg of the 2014 MLS Conference finals. Make that one very bad thing, and one slightly irresponsible thing that now threatens a team’s season.

First, the slightly irresponsible, slightly confusing thing (because it’s that, too). The New York Red Bulls will be without Bradley Wright-Phillips for the decisive away leg of their matchup with the New England Revolution. That’s with a berth in the club’s first MLS Cup final since 2008 and a chance at their first championship on the line. Why? The player himself and the coach responsible for preparing him for the game did not know the rules.

The rule in question is the yellow card accumulation rule. It specifies that a player receiving a second caution over the course of multiple playoff games sits out the follow game. When Wright-Phillips made the indefensible decision to dive in on Bobby Shuttleworth while the goalkeeper was throwing the ball out of the back in the 60th minute on Sunday, he earned the wrath of referee Allan Chapman and ensured that he won’t be a part of Saturday’s game in Foxborough.

“I didn’t know the rules of the yellow card accumulation,” Wright-Phillips told reporters after the game. “I’m angry, obviously. I’m angry. Stupid yellow card and now I have to pay.”

There is no excuse for Wright-Phillips not knowing his own situation, and for putting himself in jeopardy of suspension with the strange challenge on Shuttleworth. However, this is about more than a single player’s ignorance of the rule.

Considering the stakes involved, Wright-Phillips has done more than let himself down. His 31 total goals across the regular and postseasons is far and away tops for his team. His absence leaves a large gap at the head of the Red Bulls attack, just when they need his scoring most. New York played themselves into a hole by losing 2-1 at home in the first leg, and need at least two goals in Massachusetts to overcome the deficit.

There is also no excuse for Wright-Phillips’ coach, Mike Petke, not knowing the situation with his star player.

“What, Bradley is suspended?” was Petke’s response when asked about it after the game. “Ya, I didn’t even realize.”

In the compartmentalized world of professional soccer, where a player’s job is to play and a coach’s job is to prepare him for success, Petke failed. There’s no other way to say it. There’s a school of thought that says players aware of possible suspension might play scared, but as the Red Bulls’ season hinges on Wright-Phillips scoring goals, even that excuse doesn’t fly. Besides, Petke himself admitted he didn’t know the caution Chapman gave Wright-Phillips meant the striker would miss the second leg.

Now for the very bad thing, the thing that makes the ignorance of the Red Bulls a humorous aside to the events of the playoff weekend.

There are two things most (if not all) parties want when it comes to the outcome of a game. First, no catastrophic injuries to any players. Second, a fair refereeing performance. Under no circumstances should the refereeing come into question. If there referee gives even the slightest hint that he is not applying the rules fairly, sirens should blare.

For that reason, the LA Galaxy vs Seattle Sounders game invites scrutiny. At least two Galaxy players related hearing that referee Kevin Stott did not intend to give a second yellow card to players who would typically face such punishment. Why? Because the referee did not want anyone to miss the second and deciding leg of the series.

“It’s tough when Stott says to one of your players that he’s not going to give a player another yellow because he wants the best players to play in the next game,” Galaxy center back Omar Gonzalez said after the game.  “I think it’s not his job to focus on the next game. It’s his job to focus on the game tonight, the game in hand. For him to say that to one of our players is pretty ridiculous, but like I said in a past interview, I’m not thinking about that issue anymore. It’s out of my control; it’s out of our control. They’re going to do what they want. It’s our job to get the job done with our play.”

It’s important to note that Gonzalez’s telling of events on the field amounts to hearsay. Notice, he did not say he heard Stott admit to withholding cautions directly. Landon Donovan made comments to the same effect.

“The officials made it clear no one is getting sent off,” Donovan said in the postgame press conference, before speaking to the effect that had on the Galaxy play.

Again, this is hearsay. Take it with a grain of salt on the off chance Stott, or another official, was misheard or misinterpreted. Still, the allegations require a serious response from MLS.

Gonzalez is right in saying that it is not Stott’s, or any official’s, job to focus on the totality of the series. The referee’s obligation is the call the match as he would any other. By choosing to treat the game differently because it’s only one part of a two-part event, he’s changing the scope of his responsibilities outside the laws of the game.

The most disturbing thing here is the possible admission that the officiating was outside of the referee’s mandate. Ironically, without the comments of the Galaxy players (again, hearsay), the issue is probably nothing more than another poorly officiated game in MLS. Those happen all the time, and for the most part are simple annoyances.

With those post-game comments, this is something different. Hearsay or not, it demands an investigation by MLS and PRO because the very integrity of the game is now in question.

That, by any judgment, is a very, very bad thing.